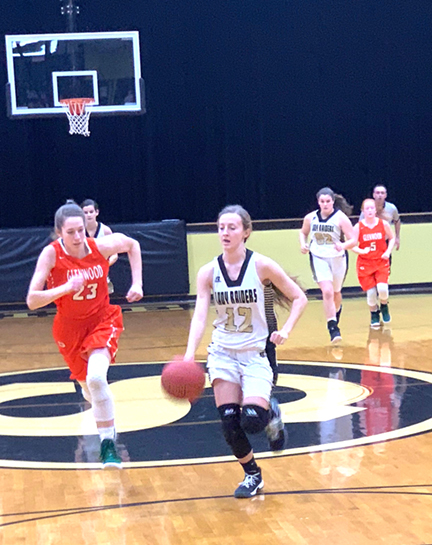 SA guard Sydney Payne led the Lady Raiders with 12 points in the win over Glenwood. Photo by Ken Gustafson

AMERICUS – The Southland Academy Lady Raider basketball team (11-2, 1-0) stepped out of region play to take on the Lady Gators of the Glenwood School (GS) from Phoenix City, AL. Behind the outside shooting of Calyn Fort, along with tenacious defense, the Lady Raiders went on a 14-0 run early in the game and never looked back on their way to a 43-21 victory over the Lady Gators on Saturday, January 5, at Southland Academy (SA).

“They (GS) have a good team. Coach Julie Humphries does a good job. We wanted to jump on them early and we were able to do that,” SA head coach Ty Kinslow said. “The girls really played good defense and everything is based off our defense. If we defend, rebound and take care of the basketball, we’re a pretty good basketball team.”

The Lady Raiders had two players in double-figures. Sydney Payne led SA in scoring with 12 points and Fort scored 11. Nine of Fort’s points came from behind the arc. Maddie Crisp also chipped in seven points in the winning cause. For GS, they were led in scoring by Morgan Grant with eight points. Kassie Kile also chipped in five for the Lady Gators. 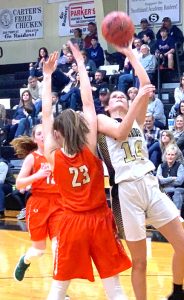 The Lady Raiders’ Haleigh Warren goes up for a rebound and tries to score. Warren scored four points in the win over the Lady Gators.
Photo by Ken Gustafson

The Lady Raiders jumped out to a 10-0 lead, partly due to two three-pointers by Fort. With 3:30 to play in the first quarter, the Lady Gators called timeout. However, that didn’t stop the momentum of the Lady Raiders as Fort hit another three-pointer. SA was up 14-0 at one point.

SA went to a full-court press early in the second quarter. The press caused the Lady Gators to turn the ball over, and SA was able to cash in with baskets. By the 4:54 mark of the second quarter, SA led 24-6. With 4:22 to go, Crisp knocked down a mid-range shot to give the Lady Raiders at 27-9 lead.

The Lady Gators scored four unanswered points, but Macy Williams scored on the inside and was fouled. She completed the three-point play, giving SA a 30-13 lead with 1:07 left in the first half. That would end up being the halftime score.

The Lady Raiders continued to play tough defense early in the second half, but struggled to score on the offensive end. They finally scored their first two points of the second half at the 4:02 mark of the third quarter when Fort scored on a layup. By the 3:57 mark, SA led 32-15. With a little over two minutes left in the third quarter, Haleigh Warren missed a jump shot, but followed her shot with a rebound and scored on the inside to give the Lady Raiders a 34-15 lead.

The Lady Gators continued to struggle on the offensive end. This was partly due to the tenacious defense of the Lady Raiders. 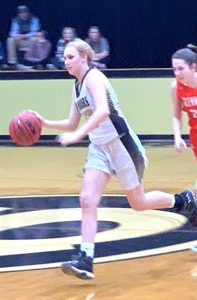 With a little over a minute to go, GS moved the ball around on offense, looking for the high-percentage shot. However, Crisp got a steal, drove the distance and scored. Crisp then finished off the third quarter by hitting a three-pointer at the buzzer to give SA a 39-15 lead.

SA stayed in total control for the rest of the game and coasted to a 43-21 victory.

The Lady Raiders will step back into region play when they host Tiftarea Academy on Friday, January 11. Tip-off is scheduled for 6:30 p.m. They will then head down to Albany on Saturday, January 12, to take on the Lady Knights of Deerfield-Windsor in another Region 3-AAA contest. Tip-off for that game is scheduled for 5 p.m.