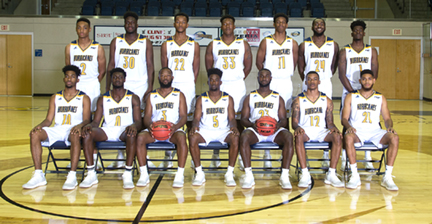 GREENWOOD, SC – The Georgia Southwestern State men’s basketball team was outscored 26-10 over the final 9 1/2 minutes Saturday and lost to the Lander University (LU) Bearcats 97-80 on Saturday, January 5, at Finis Home Arena on the LU campus.

The Hurricanes were held to 20 percent shooting from beyond the arc (5 of 25), while the Bearcats converted 10 of 16 three-pointers (62.5 percent), nearly doubling their season average for accuracy.

GSW continues to struggle on the road as they are now 0-6 away from the Storm Dome and 2-8 overall. The Hurricanes are now 0-4 in the Peach Belt Conference. In contrast, LU won its second consecutive game and improved to 4-8 overall and 3-3 in the PBC.

Jalen Morgan scored 11 points during the first half to lead GSW to a 45-44 halftime lead, despite the fact that the Hurricanes struggled from long range (2 of 12). GSW missed all five of their three-point attempts in the first half. The Hurricanes’ largest lead in the game came with 3:12 left in the first half after Morgan hit a free throw, making the score 41-37 GSW.

The Hurricanes led the Bearcats until the 16:36 mark of the second half. At that point, the game was tied 67-67 with 10:37 remaining. The Bearcats shot 58.1 percent, while the Hurricanes shot 47.9 percent from the field.

All but one of LU’s starters scored at least 15 points. The Bearcats were led in scoring by Marquel Wiggins with 19 points. Elijah Alston also helped the Bearcat offense by hitting 5 of 6 three-point attempts. Alston scored 17 points and pulled down a game-high nine rebounds.

For GSW, Morgan led the way with 17 points and six rebounds. Kwei Lartey scored 13 points coming off the bench. Andre Statam and Grant Howard were also in double-figures. They both scored 11 points on the day for GSW.

The Hurricanes will try to earn their first conference win of the season when they travel to Milledgeville, GA on Wednesday, January 9, for a game against Georgia College (6-5, 1-4). Tip-off is scheduled for 10 a.m.