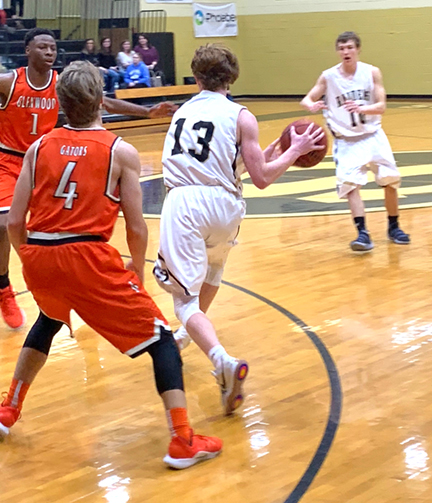 AMERICUS – The Southland Academy Raiders were in control for much of the game, but the Gators from the Glenwood School (GS) in Phoenix City, AL made some key plays down the stretch and were able to beat the Raiders 53-47 on Saturday, January 4, at Southland Academy (SA).

Southland head coach Rundy Foster was extremely disappointed with how his club played in the second half, particularly on defense.

“You can’t give up 37 points in a half and expect to win a ball game. It’s as simple as that,” Foster said. “We missed seven free throws and we just didn’t execute in the second half. We played good in the first half, but not in the second half.”

The loss overshadowed a brilliant performance by SA guard Adam Smith. Smith led the Raiders with 17 points, including five three-pointers. Max Foster and Luke Law each scored eight points. Both Landon Law and Chandler Studdard each chipped in seven in the losing cause.

GS was led in scoring by Brooks Barton with 18 points. Anthony King scored 10 and Bryce Valero scored nine for the Gators.

The Gators jumped out to a 6-0 lead to start the game, but the Raiders stormed back to tie the game on three-pointers by Foster and Studdard. The rest of the first quarter was evenly-played. The Raiders tried to hold the ball for the last shot, but were not able to get a basket to end the first quarter. By the end of the first eight minutes, SA led 9-7.

Adam Smith started off the second quarter for the Raiders by nailing a three-pointer. Studdard then scored to give the Raiders a 14-7 lead before GS head coach Dusty Perdue called a timeout. Out of the timeout, Smith hit another three-pointer to extend the Raiders’ lead to 17-7 with under six minutes left in the first half. After a basket by the Gators, Landon Law drove to the basket and scored to give the Raiders a 10-point lead. A couple of minutes later, Smith hit another three-pointer and was fouled on the shot. He missed the free throw, but the Raiders had a commanding 22-9 lead. Luke Law then scored on the inside to increase SA’s lead to 15 points.

The Gators struggled to score from the field, which enabled the Raiders to keep their double-digit lead. Luke Law then drilled a three-pointer to give the Raiders a 27-15 lead. The Gators’ Anthony King then scored on a layup to cut the Raiders’ lead to 27-17 at halftime.

The Gators scored the first three points of the second half, capped off by a free throw from Barton. The Raiders moved the ball around patiently against the 2-3 zone of the Gators. Studdard was fouled while shooting, but made one of two free throws, giving SA a 28-20 lead. Landon Law was able to hit one of two free throws to extend the lead to nine. GS forward Nathaniel Trzpuc scored on the inside, then Bryce Rosier hit one of two foul shots to cut the Raiders’ lead to 29-24. Both teams traded baskets before Luke Law hit another three-pointer to put the Raiders up by double-digits.

With two minutes to go and the Raiders leading 36-30, SA turned the ball over, resulting in a layup for the Gators. This prompted Foster to call a timeout with 1:57 left to get his group to refocus. Out of the timeout, the Gators’ Trevor Horne scored on a fade-away jumper to cut the Raiders’ lead to 36-32. With a little over 30 seconds left in the quarter, the Gators struck again when Justin Jackson hit a three-pointer to cut SA’s lead to 38-35. However, the Raiders would answer. With 2.3 seconds left, Smith hit another three-pointer to put the Raiders up 41-35 to start the final eight minutes. 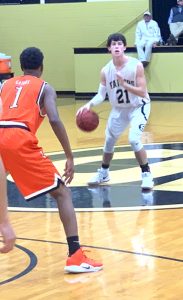 The Gators drew first blood in the fourth quarter when King scored on a layup to cut SA’s lead to 41-37, prompting another timeout by the Raiders. However, the Gators went on a 7-3 run, capped off by a basket from King, tying the game at 44-44.

It was now crunch time. Who would make the key play or mistake for either team. With 1:54 left in the game, Foster was fouled and made both free throws to give SA a two-point lead. However, Rosier hit a three-pointer to give GS a 47-46 lead, prompting another timeout by the Raiders.

With 1:02 to go, Luke Law drove to the basket and was fouled, giving him an opportunity to regain the lead for SA. Law made one of two free throws to tie the game at 47-47. Then with 47.7 seconds left, Barton scored, was fouled and made the free throw to give the Gators a 50-47 lead with 47.3 seconds left.

The Raiders were not able to score on their next possession and GS got the rebound. Jackson scored and was fouled. He made the free throw, securing a 53-47 victory for the Gators. 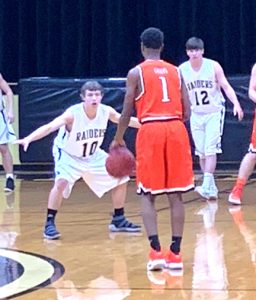 The Raiders will try to bounce back with a win when they step back into region play against Tiftarea Academy on Friday, January 11, at Southland Academy. Tip-off is scheduled for 8 p.m. They will then head down to Albany on Saturday, January 12, to take on the Knights of Deerfield-Windsor in another Region 3-AAA contest. Tip-off for that game will be at 6:30 p.m.