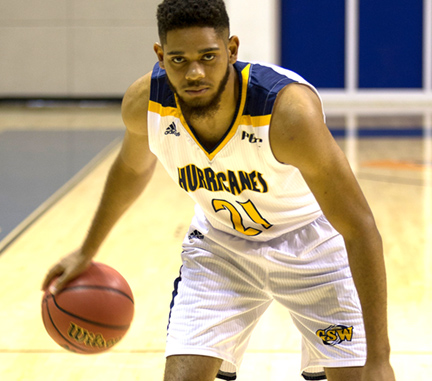 GSW senior guard Devin Watson led the Hurricanes with 14 points and made 3-of-5 shots from beyond the arc in the 70-60 loss at Georgia College. Photo by GSW

MILLEDGEVILLE, GA – The Georgia Southwestern State University men’s basketball team was outscored 18-8 over the final 5:56 and lost to Georgia College 70-60 on Wednesday, January 9, at the Centennial Center on the GC campus.

One key factor in the loss was that the Hurricanes shot 1-for-10 from beyond the arc in the second half. While GSW struggled with outside shooting, the Bobcats of GC tallied 10 more steals than the Hurricanes had (11-1) and dished out seven more assists (9-2) over the final 20 minutes.

The Hurricanes are still winless on the road (0-7) and are 2-9 overall. GSW drops to 0-5 in the Peach Belt Conference (PBC). GC won its second consecutive game and improves to 7-5 overall and 2-4 in the PBC.

GSW forward Jalen Morgan made 5-of-9 shots and scored 10 points in the first half to lead the Hurricanes to a 37-28 lead at the half. The Hurricanes shot 50 percent (16-of-32) from the floor and outrebounded the Bobcats 23-14 to build its largest lead of the game.

However, that nine-point lead quickly evaporated as GC scored the first seven points of the second half.

It was a back-and-forth affair over the next 11 minutes. GSW held a 50-48 lead with 7:26 left in the game. It ended up being their final lead of the contest due to a GSW scoring drought that lasted over three minutes. That scoring drought gave the Bobcats the opportunity to regain control of the game, which they did. GC went on to take the 70-60 win.

GSW guard Devin Watson hit 3-of-5 three-point attempts and led the Hurricanes with 14 points. Morgan scored 12 and Kwei Lartey finished one-point shy of a double-double. Lartey scored nine points and hauled down 10 rebounds in the loss.

The Bobcats had two starters post double-doubles in this game. Kohl Roberts scored 15 points and grabbed 11 rebounds, while Isaac Thomas scored 14 points and hauled down 11 rebounds. Jordan Thomas led the Bobcats in scoring with 23 points.