Knights’ swarming defense and three-point shooting too much for Southland 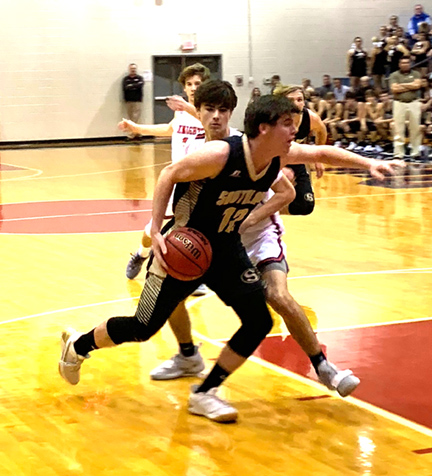 Southland forward Chandler Studdard dribbling towards the basket against Deerfield-Windsor. Studdard led the Raiders in scoring with 13 points. Photo by Ken Gustafson

ALBANY – After winning a tough Region 3-AAA game against Tiftarea Academy on Friday, January 11, the Raiders of Southland Academy (SA) traveled 40 miles south to take on the Deerfield-Windsor Knights in another difficult region contest. However, the Knights shot eight three-pointers and used their high-pressure defense to force the Raiders into committing numerous turnovers on their way to handing SA a 51-34 loss on Saturday, January 12, at Deerfield-Windsor School (DWS).

It was the Raiders’ first region loss of the season.

SA had two players in double-figures. Chandler Studdard led the Raiders in scoring with 13 points and Luke Law had 11. Hunter McCain also chipped in six points in the losing cause. Both Shamir Wingfield and Nick Dixon each scored 10 points to lead DWS. Jordan Moser chipped in nine points in the winning cause. While the Knights made eight shots from beyond the arc, the Raiders could not convert any of their three-point attempts.

The Raiders jumped out to a 10-2 lead in the first quarter as Studdard and McCain were able to score on the inside. Studdard hit a short jumper as the horn sounded to end the first quarter The Raiders were patient on offense and swung the ball around quickly from side to side. This was helpful in enabling them to work for good shots. 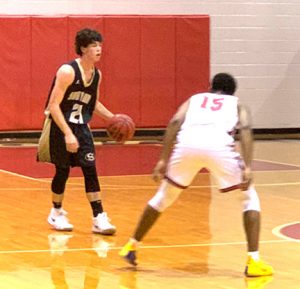 However, the Knights came to life as Moser hit two three-pointers. The Knights employed a half-court trap which caused the Raiders to turn the ball over a few times. Then with 4:10 to go in the first half, Drew Dixon hit a three-pointer to cut the Raiders’ lead to 12-11, prompting Southland head coach Rundy Foster to call a timeout. The momentum continued to be in favor of the Knights as Wingfield hit a jumper to give DWS their first lead of the game at 13-12.

The Raiders continued to struggle against the half-court defensive pressure of the Knights. DWS added to its lead on a jumper by Dixon. Studdard drove to the basket against two DWS defenders to try to score, but was called for an offensive foul. The Raiders were in the middle of a scoring drought and were unable to score for the rest of the half. The Knights went into halftime leading SA 17-12.

Southland forward Hunter McCain goes up for a rebound against Deerfield-Windsor. McCain scored six points against the Knights.
Photo by Ken Gustafson

The Knights’ swarming defense continued to cause problems for the Raiders. This was something the Raiders had to deal with the entire game. As the horn sounded to end the third quarter, Nick Dixon hit a three pointer to put DWS up 34-21.

Luke Law was fouled early in the fourth quarter, but only made one of two free throws. The Raiders, down 36-21, were able to make a 5-0 run, but DWS responded with a three-pointer by Logan Clark to put the Knights up by 13.

With 2:42 to go, Studdard was fouled and made both free throws for the Raiders, cutting the deficit to 45-33. The Raiders forced a turnover and Nathan Duke was fouled, but Duke could only make one of the foul shots. At the 1:52 mark, Foster called a timeout to try to draw up one last comeback attempt for SA. However, there would be no comeback as the Knights went on to win 51-34.

The Raiders will try to rebound when they travel to Thomasville on Tuesday, January 15, to continue region play against the Warriors of Brookwood. Tip-off is scheduled for 8 p.m.