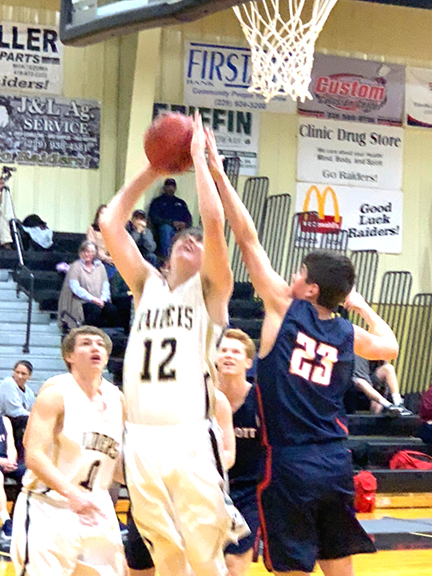 The Raiders were led in scoring by Chandler Studdard with 12 points. Landon Law scored nine and Nathan Duke chipped in eight in the losing cause. For the Warriors of the Brookwood School (BS), they had three players score in double-figures. Kurtis Brown led the Warriors with 17 points. J.P. Chapman scored 12 and Sam Barrett chipped in 11.

One big factor in this game was free-throw shooting. The Warriors made 13 of 18 foul shots while SA went 10 of 19 from the foul line. The Raiders struggled shooting from the field as well. This was partly due to the strong man-to-man defense played by the Warriors.

Duke put the Raiders on the scoreboard when he drove to the basket for a layup. The Warriors responded with four unanswered points, including a jumper by Brown. Studdard cut the Warriors’ lead to 6-3 by making one of two free throws. BS responded when Barrett was fouled and hit two free throws to give the Warriors an 8-3 lead. The Warriors then forced a turnover and increased their lead to 10-3 on a basket by Harrison Owens. This prompted a timeout by Southland head coach Rundy Foster at the 2:40 mark of the first quarter.

The Warriors implemented a half-court trap on SA’s next possession and forced a turnover. The Raiders were going through a scoring drought at this time until Landon Law ended it with a basket, cutting the Warriors’ lead to 10-5. Landon Law was fouled and made one free throw before the end of the first quarter to bring the Raiders to within four at 10-6.

With the score 12-6 in Favor of the Warriors, Duke was able to score again to cut the Raiders’ deficit to 12-8. The Raiders tried full-court pressure, but the Warriors passed their way through it and scored. With 5:17 to go in the first half, and the Raiders trailing 14-8, Studdard was fouled, but only made one of two free throws.

The Raiders struggled to score against the tough man-to-man defense of BS. By the 2:33 mark, SA was trailing 21-10 as BS went on a 7-2 run. The Raiders continued to struggle scoring until Adam Smith scored with 24 seconds left in the half. By halftime, SA trailed 21-12.

During the first minute of the third quarter, both teams traded baskets. With 5:32 to go in the third, the Raiders trailed 25-16. Max Foster was fouled, but was only able to make one of two free throws. The Warriors scored four unanswered points to take a 29-17 lead with 4:23 left in the third. The last basket of that run came when SA tried full-court pressure. The Warriors were able to pass through it and score on a layup.

However, Landon Law scored on a layup and was fouled. Law made the free throw, cutting the deficit to 29-20. This seemed to inject some life into the Raiders. Luke Law was fouled on SA’s next possession and made one of two free throws. The Raiders were able to force a turnover to give themselves an opportunity to cut further into the Warriors’ lead. Duke did just that when he drove to the basket and scored. SA forced another turnover, and Landon Law was fouled while shooting. Law made one of two foul shots, cutting the Warriors’ lead to 29-24. This prompted a timeout by BS head coach Drew Giudice at the 2:40 mark of the third quarter.

With 1:52 left in the third, Duke was fouled and made both free throws, cutting the deficit to 30-26. However, the Warriors responded by scoring on a fast-break layup.

With 49.9 seconds left in the third quarter, Studdard nailed a three-pointer, bringing the Raiders to within three at 32-29. However, BS scored when Chapman hit a desperation three-pointer off the backboard as the horn sounded, giving the Warriors a 35-29 lead to start the fourth quarter.

In the beginning of the final frame, the Raiders implemented a half-court trap to try to force BS into committing turnovers. However, the Warriors were still able to score.

With 6:27 left, Studdard drove to the basket, but lost his footing and lost the ball out of bounds.

Then with a little over five minutes left in the game, Barrett nailed a three-pointer to put BS up 40-29.

Studdard scored with under four minutes left, but the Warriors responded with another basket to give themselves a 42-31 lead with 3:37 left.  With 2:47 left, Studdard nailed a three-pointer to keep hope alive for SA. They trailed 42-34 at that point. By this time, the Raiders were applying full-court pressure, but the Warriors were able to break it. However, with 1:41 left in the game, Landon Law scored to cut the Raiders’ deficit to 43-36.

Unfortunately, that would be as close as the Raiders would get for the rest of the game. The Warriors went on to win 47-36.

As far as the Region 3-AAA standings are concerned, the Raiders are now 2-2 and are tied with Deerfield-Windsor. However, the Knights are currently ahead of the Raiders due to the fact that that DWS defeated SA on Saturday, January 12, in Albany. Brookwood is tied with Tiftarea Academy at 3-1 at the top of the region standings. Valwood brings up the rear at 0-4.

The Raiders will try to get back on track when they host Valwood (1-9, 0-4) in their next game. The last time the two teams met, the Raiders edged out the Valiants 46-43 on Friday, January 4, at Valwood. Tip-off for the rematch at SA is scheduled for Friday, January 18, at 8 p.m.