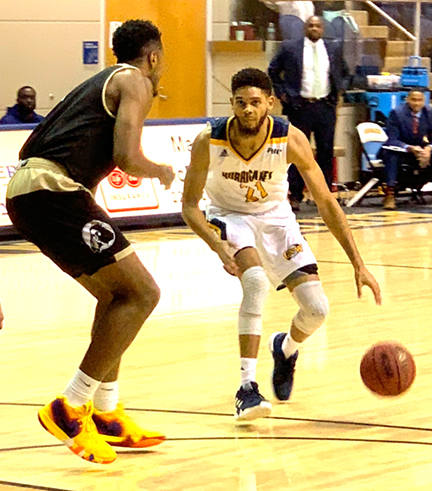 COLUMBUS, GA – In spite of senior guard Devin Watson’s 21 points to lead the Hurricanes, the Georgia Southwestern State University men’s basketball team dropped their sixth straight loss when they fell at Columbus State 86-75 on Wednesday, January 16, at the Lumpkin Center on the CSU campus.

Watson was 5 of 10 from three-point range and also led the Hurricanes with three steals.

With the loss, the Hurricanes now fall to 2-11 on the season and are still winless in the Peach Belt Conference (0-7). Columbus State (CSU) won for the second time in its last three games to improve to 7-6 overall and 3-5 in the PBC.

CSU went on an 8-0 run to start the game, but the Hurricanes responded with nine consecutive points of their own to put themselves right back in the game. However, their slim 9-8 lead was their only lead of the evening.

GSW trailed 15-13 before the Cougars distanced themselves with a 13-2 run over a five-minute span. During this time, the Hurricanes turned the ball over three times and shot 1 for 7 from the floor. The Cougars went into halftime with a 38-21 lead over the Hurricanes.

In the second half, CSU blew it open, leading by as many as 24 points at one point. They led GSW 50-26 before the Hurricanes roared back to cut the deficit to single digits. GSW was able to get to within nine points at 84-75, but that was as close as they would get.

In addition to Watson, R.J. Sessions was also in double figures, scoring 18 points. The Cougars had five players score in double figures. Bryant Givens led CSU in scoring with 18 points. Givens posted a double-double as he dished out 10 assists and added a game-high six rebounds.

GSW hits the road again on Saturday, January 19, when they travel to Florence, SC to take on Francis Marion University (10-2, 6-1 PBC). The last time these two teams met was on Monday afternoon, December 17, at the Storm Dome. FMU defeated the Hurricanes 90-85. Tip-off for the rematch at FMU is scheduled for 3:30 p.m.