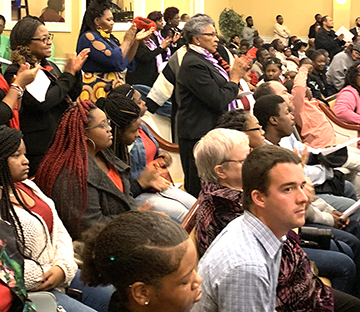 A small portion of the large crowd at Friendship Missionary Baptist Church during the Martin Luther King Jr. service.

Annual King celebration draws huge crowd
AMERICUS — With vacant seats practically nonexistent, a vast crowd gathered at 11 a.m. Monday at Friendship Missionary Baptist Church to celebrate the life and teachings of the late Dr. Martin Luther King Jr. on the annual holiday.
With stirringly glorious music from the Community Combined Youth Choir and various prayers and speakers, the event was a great success. Sisters from Zeta Phi Beta Sorority Inc., Delta Sigma Theta Sorority Inc., and Alpha Kappa Alpha Sorority Inc. acted as ushers, handed out programs, and received the love donations.
Col. Eric Bryant, chief deputy of the Sumter County Sheriff’s Office, acted as master of ceremonies.
In her occasion, McKinley Minyard stressed King’s message of love. “Beyond race and rights, how do we move forward?” she asked. “We must learn to love more.”
Deacon Joe Clark, is his prayer, thanked God for the young people in attendance.
The Rev. Mark Scott, who is also chief of the Americus Police Department, read scripture from Hebrews 12, of the persecution of the early Christians. “They were surrounded by a cloud of witnesses,” Scott said., adding that on Monday there was also a cloud of witnesses — the youth in attendance. “They’re looking to us to see what we do, to see if we leave the world a better place than we found it.”
Scott said that he and wife, since moving to Americus to make their home a couple of years ago, have had the pleasure of working alongside people who believe in Jesus Christ. But he also said he had to address the negatives. He mentioned the human trafficking in Atlanta, and the rising amount of violent crime here in Americus among young people, citing 11 drive-by shootings reported in the community during the last 90 days of 2018. He said that while several arrests had been made, detectives are still working on these incidents that resulted in two injured persons.
Scott said that as a society, we have lost our moral compass, and that “it’s a heart problem, not a police problem … My prayer is that in 2019, we all come together as a community to reclaim the hearts of our young people.”
Emcee Bryant asked that all those in attendance ages 21 and younger to stand and be recognized. There were many.
Americus City Council member Kelvin Pless, District 5, gave greetings. He quoted King in his love of power, not for power’s sake, but “power that is moral, right, and good.” Pless said that while some have fought and sacrificed for civil rights, others don’t even bother to vote. “Facebook, Twitter and other social media,” he said, “you don’t a vote with those.”
Pless, in addressing the youth of today, said there is nothing wrong with saying “yes m’am, and no sir,” and that pants should go to the waist. “Love your brothers and sisters,” he said. “As Dr. King said, ‘the time is always right to do right.’ ”
Sam Mahone, a native of Americus who was part of the civil rights movement here, who has lived in Atlanta for many years, is still very much involved in preserving that history. He spoke briefly, representing the Americus and Sumter County Movement Remembrance Committee, which is tasked to record, collect, and document the history of the local movement from 1962 to 1966. He also briefed the audience on the current mission to preserve the former Americus Colored Hospital, on the corner of J.R. Campbell Street and Cotton Avenue, for use as the Americus Civil Rights Museum. The building, which was known as the Freedom Center during the movement, has been maintained and owned by the City Federation of Colored Women’s Clubs, which has leased it to the committee for 99 years.
“Americus was one of the most important civil rights movements in the country,” Mahone said. “It is the only place where Dr. King, John Lewis and [the] Rev. [Ralph] Abernathy were jailed in one city in 1961.”
Mahone reminded the audience that King did not wish to be known as a messiah, but as a foot soldier of the movement. He mentioned several of those foot soldiers still around such as Lorena Barnum Sabbs and Robertina Freeman, among others.
Arthur Mays Jr., a member of the Sumter County Parks and Recreation Department’s (SCPRD) 10 and under State Championship Football Team (some of whom were in attendance and later recognized) introduced keynote speaker, Dwight Harris, a coach with the SCPRD, and founder of the Dwight Harris Boys Club. 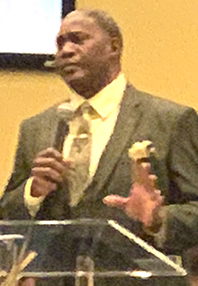 Harris titled his presentation, “If truth be told.” He said the problem today with the nation and world today is that “we tell too many lies.”
“There are men and women in all walks of life that need to get in line and straighten up,” he said. “The problem is we have too many crooks … Freedom and truth go hand in hand … Racism and inequality still exist … We’ve been singing ‘We Shall Overcome’ since slavery.”
Harris said that poverty, a major problem in the nation and right here in Americus, “causes much unrest.”
Harris quoted King with “to delay justice is injustice,” and said, “We must be true to our own self. I see lots of white people trying to act black, and lots of black people wishing they can be white.”
Harris showed a photo of Jesus Christ, depicted as a white man. “This is not your Jesus … If we’re going to change this world, we must change adults, by teaching children … Innocent and precious babies are being born into a world filled with hate … and predators … ”
Harris ended with another King quote, “when all can look each other in the eye, we can know each other’s worth.”
The Rev. Mathis Wright, president of the local branch of the National Association for the Advancement of Colored People (NAACP), then took the podium to close out the service.
Wright said, “When I see people, I don’t see color; I just see a person. When I look at the new chairman of the Sumter County Board of Commissioners, I don’t see a black man; I see someone who can get things done that haven’t been done before. … When I see Chief Scott, I see a man with a job to do in this community who cares in his effort for the entire community to get it right.”
Wright continued, “When I see Col. Bryant, I see man in authority who can get something done when we respect the authority he has … But we fail to respect the authority that God has.”
Wright said that while King’s dream was important, it was King’s dream, not his. “What’s your dream?” he asked. “What are you going to do to make a difference in this world, in this country, in your own home?
“There’s much you can do, but you have to have the courage to stand up and do it,” he said. Wright explained that you can’t be fair and crooked at the same time. “The goal is to be right, and you can only get there by trusting God. It takes courage to do what has to be done to correct injustices.”
Wright said that racism still exists in 2019. “We as a community can make a difference,” he said. “We have not overcome. Most of the civil rights bills and acts have been taken back. What will we leave our children? We are too selfish. It is ‘me, me, me,’ and not ‘us, us, we.’ God has allowed us to win many wars. We don’t want to come together once a year and say King had a dream. You have your own dream. Act on it. When you pray, you put yourself in a position to act on it.”
Wright stressed that in the story of David and Goliath, that David, although much smaller and weaker than Goliath, “went in the name God,” and that’s why he was able to conquer the giant.

By Ken Gufstafson AMERICUS — Close to 60 people crowded into courtroom eight on the second floor of the Sumter... read more