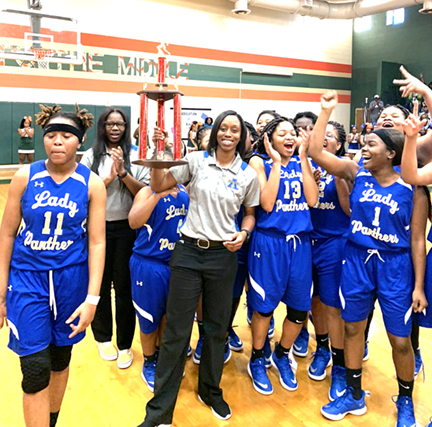 ALBANY – The Americus-Sumter Lady Panthers of tomorrow showed their talents as the Sumter County Middle School (SCMS) Lady Panthers faced the Albany Middle School (AMS) Lady Indians in the championship game of the Deep South Conference. In the second half, the Lady Panthers intensified their defense, forced numerous turnovers and scored points off of those turnovers to build a big lead on their way to a 50-30 victory over AMS to capture the Deep South Conference Title.

“My girls did a great job of hustling tonight and executing the game plan,” SCMS head coach Danielle Colson said. “Everyone played hard and everyone did a great job.” 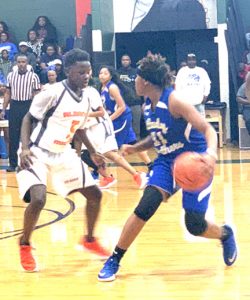 The Lady Indians found their stride in the second quarter as they went on a 6-0 run to take a 13-12 lead. However, the Lady Panthers responded with three points to take a 16-13 lead with under three minutes left in the first half. With 2:32 to go, Aldridge scored on a layup to give SCMS an 18-13 lead.

With 54.7 seconds to go, Burns was fouled and hit one of two free throws. This sparked a late run by the Lady Indians as Jatiana Chambers got a steal and scored to cut the Lady Panthers’ lead to 20-18. However, D’Eria Clark hit a three-pointer seconds before the horn sounded to give SCMS a 23-18 halftime lead.

Clemons led the Lady Panthers with eight first-half points while Burns also led AMS with eight points in the first half. 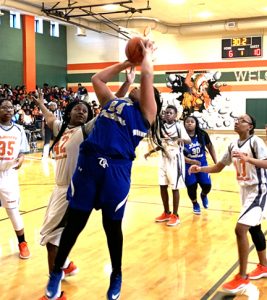 SCMS forward Eriel Aldridge goes up for a rebound and tries to score. Aldridge scored 11 points in the Lady Panthers’ win.
Photo by Ken Gustafson

With under four minutes left in the fourth quarter, the Lady Panthers had a 45-30 lead. Clemons was fouled while shooting and made one of two free throws. With 2:58 to go, Aldridge was fouled while shooting, but missed both free throws. However, SCMS got the ball back and Aldridge was able to score to give the Lady Panthers a 48-30 lead with under three minutes remaining.

The Lady Indians were not able to mount a comeback and the Sumter County Lady Panthers went on to win the Deep South Conference Championship.

As the game was about to end, some fans got a little too rambunctious. One fan threw a bottle on the floor shortly before the game was over. That fan was singled out in the crowd by the police and taken into custody.

In spite of that incident, It was a great night for the SCMS Lady Panthers as they celebrated with their championship trophy after the game.