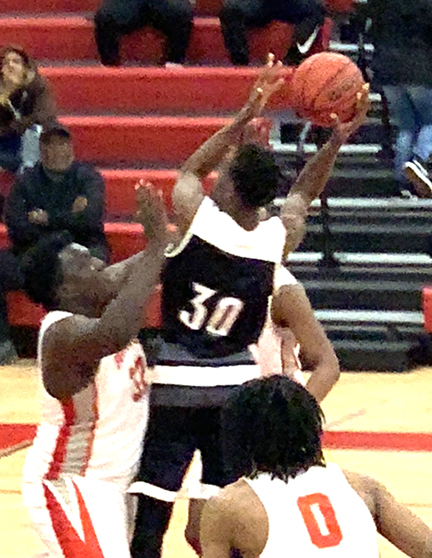 Schley County forward JyQuavious Pitts goes up to score. Pitts scored four points in the loss to the Bulldogs. Photo by Ken Gustafson

MONTEZUMA – It was everything one would expect in a region game between two quality teams. It was a back-and-forth affair between the Schley County Wildcats and the Macon County Bulldogs in an important Region 4-A contest. However, Schley County (SC) shot 4 for 13 from the foul line for the game. That would prove to be extremely costly as the Bulldogs would end up winning 59-53 on Tuesday, January 29, at Macon County High School (MC).

With the loss, the Wildcats fall to 12-9 overall and are currently in fourth place in the Region 4-A standings at 9-6. Manchester trails the Wildcats by 1/2 a game at 8-6. The Blue Devils have two region games remaining before the Region 4-A Tournament. They are at Central on Friday, February 1 and close out their regular season at home against Marion County on Saturday, February 2. The Wildcats have one Region 4-A regular season game left before the region tournament. It’s against Hawkinsville at home on Friday, February 1. Tip-off is scheduled for 7:30 p.m. With the win over SC, the Bulldogs are 15-6 overall and stand atop the Region 4-A standings with a record of 13-2. 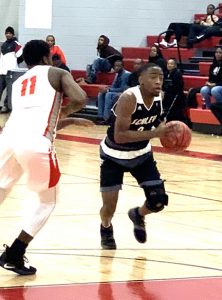 The Bulldogs came out strong to start the second half as they scored the first five points of the third quarter, but the Wildcats responded with an 8-0 run, capped off by a basket by Walker to cut the Bulldogs’ lead to 35-33.

SC power forward JyQuavious Pitts had a chance to tie the game when he was fouled while shooting, but missed both free throws. This was a microcosm of the problem the Wildcats had at the foul line. The Bulldogs responded with a 5-0 run, prompting SC head coach Ernest Scott to call a timeout with 3:18 to go. At that point, MC led 38-33.

Out of the timeout, Makevion Bonner drove to the basket and scored for the Bulldogs, but Noah Hammonds knocked down a three-pointer for SC. The two teams traded baskets for the next minute until the Bulldogs made a run to close out the third quarter with a 46-38 lead. 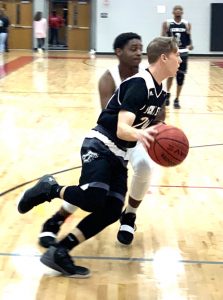 Schley County guard Dylan Taylor scored 12 points against the Bulldogs. All of his points came on four three-pointers.
Photo by Ken Gustafson

With the Bulldogs leading 46-39, De’onte Cross scored with a floater to cut the deficit to 46-41. Then Dylan Taylor hit his fourth three-pointer of the game to bring the Wildcats to within two with under six minutes to play in the game. With 4:49 to go in the game, the Bulldogs called timeout, leading 48-44.

With 3:51 to go, MC had the ball, but Dylan Taylor fouled MC’s Nicholas Willis as he was trying to shoot a three-pointer. Willis made two of the three free throws to give the Bulldogs a 50-44 lead.

With 3:16 to go, Jordan Taylor was fouled and hit both free throws to cut the Wildcats’ deficit to four. Taylor scored again to bring SC to within two at 50-48. That would be as close as the Wildcats would get for the rest of the game. 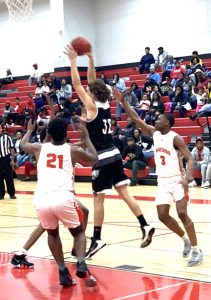 After another basket by MC, the Wildcats had the ball, but Tra Sampson was called for traveling. This turnover resulted in another basket for the Bulldogs, and they increased their lead to 54-48 with 1:28 to go. Walker was fouled while shooting and had a chance to cut into SC’s deficit. However, Walker only made one of the two free throws. The Wildcats got the ball back and Walker Was able to score.

However, it would not be enough as the Bulldogs held on to win 59-53.