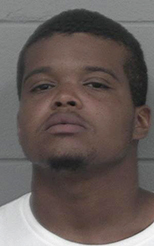 AMERICUS — Authorities are seeking information on the whereabouts of suspect in a deadly weekend shooting.

Officers with the Americus Police Department responded to the 900 block of Parker Street at approximately 9:48 p.m. Sunday to a report of a shooting.

Upon arrival, officers found a man lying the street with a gunshot wound to the chest.

The victim, identified as Andre Vernard Ingram, 34, of Americus, was treated by EMS on scene and then transported to Phoebe Sumter Medical Center where he later died.

Warrants have been issued for a suspect identified as Deontrey Marquavious Parker, aka Trey, 24, of Americus.

The investigation is ongoing. Anyone with information regarding the whereabouts of Parker is asked to call the Americus Police Department Criminal Investigation Division at 229-924-3677.