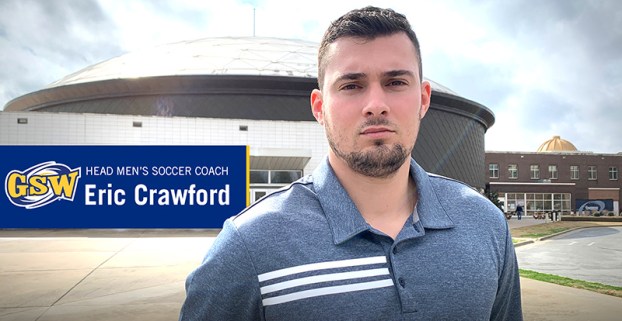 GSW has named Eric Crawford as the new head men’s soccer coach for the 2019 season and beyond. Photo by GSW

“We are very excited to have Eric join the Hurricane family as our new head men’s soccer coach,” Leeder said. “Eric’s success as both a player and assistant coach at the NCAA Division II level stood out as we were identifying candidates, and his passion and plan to build a winner here at GSW stood out throughout the interview process.”

In addition to his time on the coaching staff, Crawford was a four-year letter winner at Northeastern State. He becomes the third head coach in GSW men’s soccer history, replacing Warren Russ. Russ announced in October of 2018 that he was stepping down after 12 seasons at the helm.

“I am very excited to take over as the head men’s soccer coach at GSW,” Crawford said. “The program has a lot of potential and I am thankful to Coach Leeder for giving me the opportunity to lead the team into the 2019 season and beyond.”

Crawford, a native of Ontario, Canada, is looking forward to recruiting while settling into his new home.

“From the time I stepped on campus for my interview, the family atmosphere and competitive nature of the staff spoke to me,” Crawford said. “After seeing Americus, I knew that this was a place where I would be excited to live and grow my family.”

Crawford is the most decorated student-athlete in Northeastern State history. He is the first student-athlete in school history to be a finalist for the Ken B. Jones Award. The award is presented to the male and female student-athletes of the year for the Mid-America Intercollegiate Athletics Association. Overall, Crawford is a two-time NSCAA All-American, a seven-time All-Region First Team performer and a three-time All-MIAA First Team honoree. Crawford played at NSU in 2011 when the school was an independent and therefore was unable to be named All-MIAA all four years. He also sat out the 2014 season due to a medical redshirt.

Crawford played in 70 career matches and made 68 starts for NSU. He also captained a back line unit that recorded the three best defensive seasons in school history. He helped lead the River Hawks to two appearances in the NCAA Division II Tournament, including one trip to the quarterfinals. Crawford also led the team to two MIAA Championships and three runner-up finishes during his career.

Crawford had a distinguished amateur career with the Toronto Lynx of the PDL and the Oakville Blue Devils of League 1 Ontario. He was named an all-star in 2016 and won the League 1 Championship, as well as the Provincial Cup in 2015.

Crawford’s academic accomplishments include being named to the CoSIDA Academic All-District 7 First Team in both 2013 and 2015. He was also selected to the 2015 NSCAA Men’s Division I and Division II Scholar All-America Team. Crawford was a four-time member of the MIAA Academic Honor Roll and a two-time MIAA Scholar-Athlete. He was also named to NSU’s Dean’s List 10 times and was once selected to the President’s Honor Roll.

Crawford graduated with a degree in Biology and will be completing his masters degree in Health and Kinesiology.