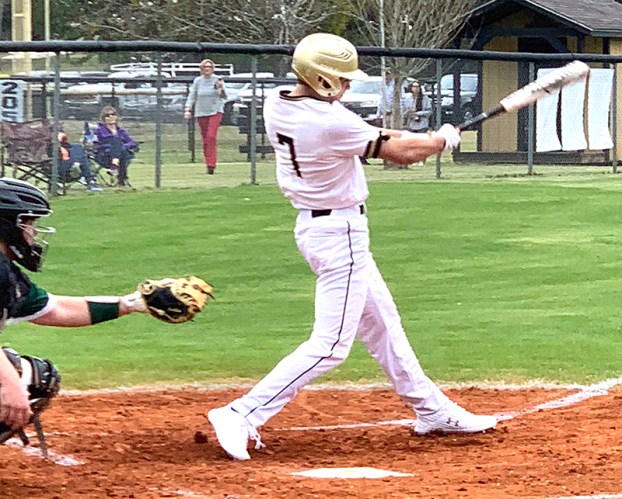 Southland Academy’s Tyler Kennedy went 3 for 4 and scored a run in the Raiders’ 4-2 loss to Westfield. Photo by Ken Gustafson

AMERICUS – After losing a well-pitched game at Crisp County on Friday, February 22, the Southland Academy Raider baseball team was ready to rebound with a win in their home opener against the Westfield School (WS) on Tuesday, February 26. Unfortunately for the Raiders, though they earned five hits against the Hornets, walks and errors contributed to a 4-2 loss to the visitors from Perry, GA.

WS had the bases loaded with two outs in the top of the first, but SA starting pitcher Adam Smith was able to get Travis McDonald to fly out for the third out.

The Raiders responded in the bottom of the first inning. Tyler Kennedy led off with a single. Then Freddie Updike drew a walk from WS starter James Hays. Kennedy then advanced to third on a wild pitch. This was followed by a fielder’s choice from Hunter McCain, allowing Kennedy to score the first run of the game. 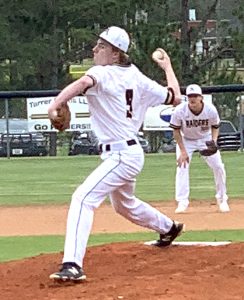 Southland starting pitcher Adam Smith struck out two and gave up one hit in SA’s 4-2 loss to the Hornets.
Photo by Ken Gustafson

George Wall then hit into a fielder’s choice, which allowed Updike to score from third. Both Luke Law and Landon Law drew walks. The Raiders had runners at first and second with two outs. Clay Owens struck out to end the inning, but the Raiders had taken a 2-0 lead.

However, the Hornets scored three runs in the top of the third to take a 3-2 lead. They took advantage of an error, a walk and a wild pitch. Landon Law was brought in to pitch in relief of Smith. Unfortunately for the Raiders, WS scored another run in the inning. That would be the last run the Hornets would score in the game, but it was enough for them to get the 4-2 win.

In the bottom of the fifth, the Raiders had runners at first and second with one out. However, Landon Law flew out and Owens struck out to end the threat. The Raiders were able to keep the Hornets from scoring any more runs, but were unable to capitalize with runners in scoring position. The Hornets went on to win 4-2. 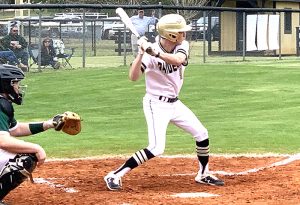 Southland catcher George Wall batting against Westfield. Wall drove in one RBI in the 4-2 loss.
Photo by Ken Gustafson

Kennedy had a great day at the plate for SA. He went 3 for 4 and scored a run. Luke Law went 2 for 2 and drew two walks. All five of the Raiders’ hits came off the bats of Kennedy and Luke Law.

The Raiders used three pitchers in the game. Smith started the game for SA and pitched a little over two innings. He gave up three runs on one hit, walked four and struck out two batters. Landon Law, who came on in relief of Smith in the third inning, gave up one run on one hit. He walked two and struck out three batters.

Owen Exley, the final pitcher used by SA, pitched one inning and only gave up one hit.

The Hornets’ Matt Huckabee went 2 for 4 at the plate and scored a run to lead the WS offensive attack.