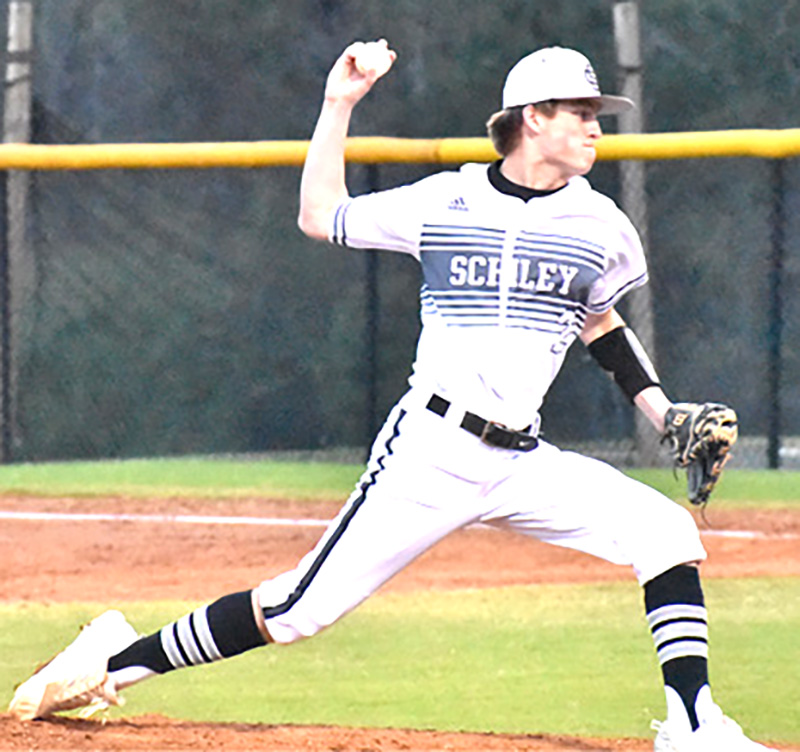 Schley County junior Garrett Peavy seen here pitching in a previous game. Peavy went 2 for 4 at the plate and struck out three Crisp County batters to seal the win for the Wildcats. ATR Archive

ELLAVILLE – The Schley County Wildcat baseball team (SC) had a slim 3-2 lead over Crisp County going into the bottom of the sixth inning. However, the Wildcats exploded for five runs on three hits. They also took advantage of three walks, an error and a hit batsman to take an 8-2 lead. It was a lead they would hold on to for the win.

Trypp Lumpkin led off the bottom of the sixth with a walk. After a sacrifice bunt by Ricky White, Lumpkin advanced to third on a passed ball. Dakota Albritton hit into a fielders’ choice for the second out of the tinning, but Garrett Peavy singled, driving in Lumpkin to give SC a 4-2 lead.

Dylan Taylor followed that up with an RBI double. He then advanced to third base on another passed ball. Dylan Windham and Ashton Goodin both drew walks, loading the bases for Trent Bivins. Bivins singled to drive in Taylor, giving the Wildcats a 6-2 lead. Lorne Barineau then hit a hard ground ball that was mishandled by CC second baseman Jackson Napier. Both Windham and Goodin scored on the play to complete the five-run inning.

Peavy pitched the top of the seventh inning and struck out three Cougar hitters to seal the win for SC.

The Wildcats are now 6-0 on the season and are 4-0 in Region 4-A play. They scored eight runs on six hits and committed one error. SC took advantage of four errors committed by the Cougars.

The game was pretty much a pitchers’ dual with both teams tied at 1-1 until the bottom of the fifth inning. With two outs, Peavy singled and stole second base. Taylor then drew a walk to put runners on first and second for the Wildcats. Windham then drilled a double to left field, scoring Peavy and Taylor to give the Wildcats a 3-1 lead.

The Cougars got a run in the top of the sixth as a result of two walks, an error and a passed ball. However, they didn’t score any more runs after that.

Goodin started the game on the mound for the Wildcats. He pitched three innings and gave up one run on three hits. He walked three batters and struck out five.

Barineau came on in relief of Goodin. He pitched a little over two innings, giving up three hits and striking out four Cougar hitters.

Taylor came on briefly and pitched 0.1 innings. He gave up one run and had one strikeout. Peavy was the fourth and final pitcher for SC. He pitched one inning, giving up one hit and striking out three.

The Wildcats will try to stay unbeaten when they travel up Highway 19 to Butler, GA to take on region opponent Taylor County on Friday, March 1. First pitch is scheduled for 5 p.m.