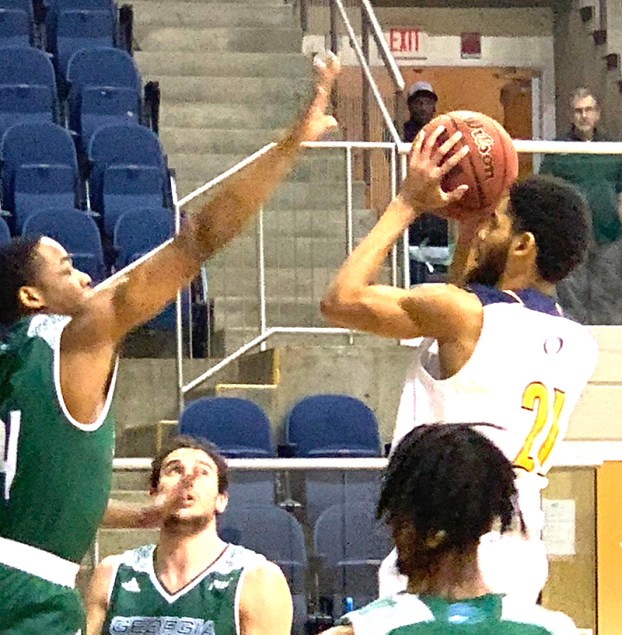 GSW senior guard Devin Watson seen here taking a shot in a previous game this season. Watson scored 23 points to lead the Hurricanes to a 78-68 win over Clayton State on Senior Night. Photo by GSW

Hurricanes send six seniors out on a winning note

AMERICUS – For five GSW seniors, it would be a night they would cherish for the rest of their lives. It was Senior Night in the Storm Dome when GSW took on Clayton State (CS). These seniors, along with the rest of the Georgia Southwestern State University men’s basketball team (5-22, 3-18), made the most of it. They came away with a 78-68 victory over the Lakers on Wednesday night, February 27.

The Lakers cut the lead to single digits eight times during the second half. At one point, they cut the lead down to 73-68 with 1:37 left. However, the Lakers weren’t able to get any closer and GSW came away with a much-needed win.

Freshman forward Jamari Dean posted his third double-figure rebounding night of the season as he led GSW with 10. Sessions scored 17 points and Taylor chipped in 13. All of the five seniors who were physically able to play (Watson, Taylor, Lartey, Sessions and Statam) started the game. Graduate transfer Jalen Morgan has been out of the lineup with an injury since January 30.

CS (9-18, 6-15 PBC) has lost six of its last seven games. With this defeat, the Lakers have been eliminated from postseason contention. CS was led in scoring by Kyle Kincey with 32 points.

The Hurricanes will close out their season with the Homecoming game on Saturday, March 2. They will be taking on the Nighthawks of the University of North Georgia. Tip-off is scheduled for 3:30 p.m.