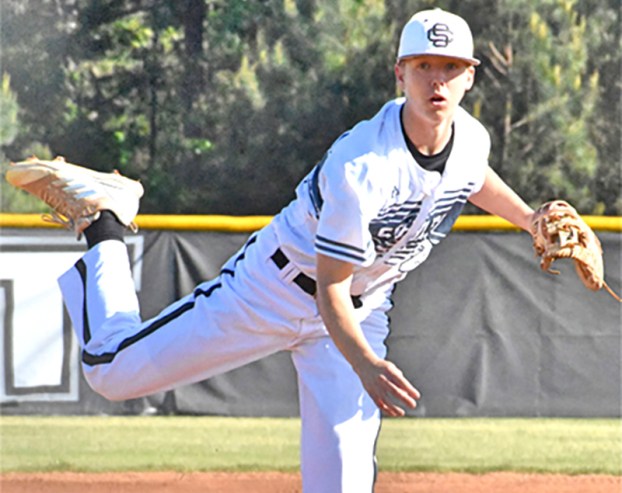 CORDELE – Schley County starting pitcher Dylan Taylor had the Crisp County hitters totally off-balanced and unable to muster any offense as he pitched a complete game, allowing no runs and only one hit to lead SC to a 10-0 shutout of the Cougars on Tuesday, March 26, at Crisp County High School.

The sophomore right-hander struck out six CC batters on the day and walked only one.

“Our pitching has carried us all year. Today was no different,” SC head coach Chuck Cheek said. “Dylan did a great job on the mound and held them down until we could get the bats rolling.”

At the plate, Taylor had two hits on the day. He went 2 for 3, scored a run and drove in an RBI. Freshman Trypp Lumpkin was also productive at the plate for the Wildcats. Lumpkin helped SC score eight runs in the top of the fifth inning by knocking in two runs on a double to left field. Taylor got one of his hits in the top of the fifth on an RBI single. Dylan Windham was also productive in the inning. Windham drove in two runs on a single to complete the scoring for the Wildcats.

SC scored 10 runs on eight hits and committed no errors. Cheek was particularly pleased with how his club performed defensively.

“Defensively, that’s back-to-back games with no errors,” Cheek said. “We made some nice plays out there.” Cheek went on to say that Lumpkins’s two-run double in the fifth was good to see and that he was pleased with the amount of opposite-field hits the Wildcats had in the game. “We’ve really been working on being able to drive the ball the other way,” Cheek said. “We executed well, got a couple of bunts down and ran the bases well.”

Bailey Barfield got the only hit for the Cougars on the night.