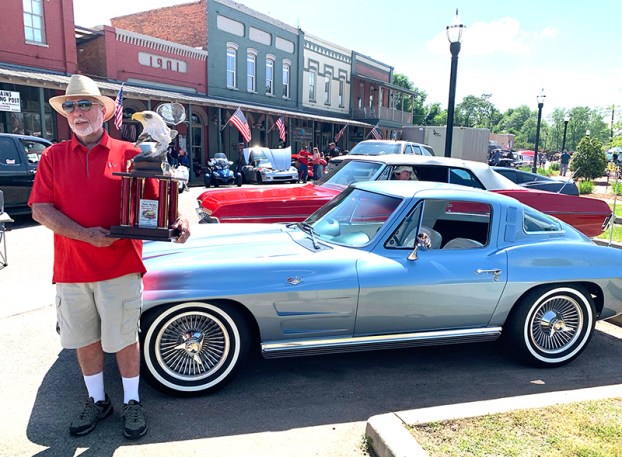 Scott Hardin from Fort Payne, Ala., took home the President Jimmy Carter’s Choice Award for the presentation of his 1964 Corvette Coupe Stingray at this year’s spring car show in Plains. Photo by Ken Gustafson

PLAINS — Over 100 car owners from all over the Southeast descended upon Plains on Saturday for the 12th annual Open Car, Truck & Motorcycle Show sponsored by the Plains Better Home Town program, the Friends of Jimmy Carter National Historic Site, and the Plains Inn & Antique Mall. 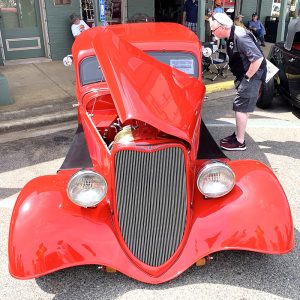 A 1934 Ford Sedan on display at the spring car show in Plains.
Photo by Ken Gustafson

The automobile owners came to show the judges and car enthusiasts alike how well they have restored and maintained their automobiles. 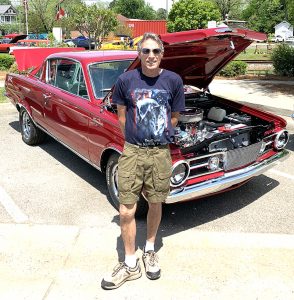 Erwin Gendreau of Tallahassee, Fla., won last year’s President Jimmy Carter’s Choice Award for his 1930 Ford Sport Coupe. This year, he won an award for Best of Show with his 1964 Plymouth Barracuda.
Photo by Ken Gustafson

Ruth Sanders, executive director of the Plains Better Home Town program, was extremely pleased with the turnout. “I think we had a great day and we’re going to have another one in the second week of November,” she said. The car show in November that Sanders was referring to is one that takes place in Plains every year on Veterans Day.

Scott Hardin from Fort Payne, Ala., won the President Carter’s Choice Award for his presentation of his 1964 Corvette Stingray Coupe. “It was restored 30 years ago in 1988-89, so it has a 30-year-old paint job on it,” Hardin said. “It probably has a total amount of around less than 55,000 miles on it. It only has 2,500 miles on it since 1988. Everything on it works and everything that came with it since it was built on Jan. 2, 1964, is still with it. Nothing on it has been changed. It’s all original.”

Hardin said the car was designed to be a girl’s car and that a man in Tampa, Fla., bought it for his wife either for their anniversary or for her birthday. “It’s one of 463 made that year (1964). It’s an automatic with air conditioning, power steering, and power breaks,” Hardin said. 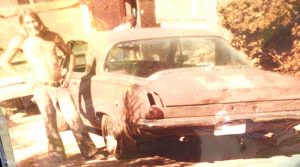 Photo of Erwin Gendreau while in high school with the same 1964 Plymouth Barracuda he was displaying at the car show.
Photo by Ken Gustafson

Like Hardin’s vehicle, all the cars on display had a story behind each and every one of them. Tallahassee, Fla., native Erwin Gendreau was the President Carter’s Choice Award winner at last year’s spring car show in Plains. Last year, he won it with the presentation of his dark-green 1930 Ford Sport Coupe. This year, Gendreau won the Plains Police Chief’s Choice Award for his 1964 Plymouth Barracuda. Gendreau acquired the vehicle in 1976. “It was my high school car,” Gendreau said. On the side of the car, Gendreau had a picture of himself while he was in high school standing next to the same car he was displaying at the show. “I went to high school in this car and I’ve been restoring it ever since,” Gendreau said.

Steve Hanks, a native of Phenix City, Ala., stands in front of his 1962 Pontiac Parisian. Hanks won a Best of Show award for his restoration and maintenance of the vehicle.
Photo by Ken Gustafson

While the majority of the vehicles were built in the United States, one vehicle was built and designed across the border in Canada. Steve Hanks of Phenix City, Ala., had such a vehicle, and it represented a dispute between American and Canadian automobile workers in the 1950s and ‘60s. Hanks’ car was a 1962 Pontiac Parisian, which was built and designed in Canada. “It’s the Canadian cousin to the Bonneville,” he said. “Canada had their own Pontiac production facility, even though it was owned by GM. In the ‘50s and up until about 1967, there was a tariff issue between the United States and Canada. The tariff on a wholly completed Canadian car coming into the United States was astronomical. Canada did the same thing with shipping anything that was completely made in the United States over into Canada. However, there’s something called partial assembly. If you partially assembled something, you could move it between international lines without the tariffs.” 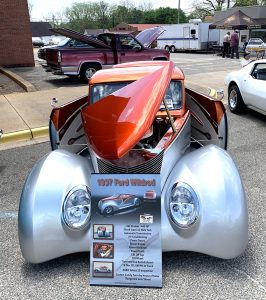 A 1937 Ford Wildrod on display at the Open Car, Truck and Motorcycle Show in Plains.
Photo by Ken Gustafson

Hanks said that what GM decided to do was to ship sub frames, transmissions, motors, front ends, and wheels into Canada and the Canadians took their bodies and set them on the frames. “They didn’t even need to build frames and motors at that time in Canada. They pretty much shut down that production,” Hanks said. “All the Canadians would do is build their bodies and this car I have is the Canadian cousin to the Bonneville, just like the Beaumant is the Canadian cousin to the Cheverolet Biscayne and the Accadian is the Canadian cousin to the Chevrolet Nova. Canada always maintained their names because the car came out of Quebec. They had French Canadian pride about their products.” Hanks said the Canadians maintained the dashboard of the Pontiac Parisian, but in 1962, Chevrolet put bucket seats inside an Impala Super Sport. Hanks’ vehicle contained the same type of bucket seats and upholstery that Chevrolet put into the Impala SS. “This is an original car. I bought this car a couple of years ago. I’ve rebuilt the transmission, had the front end rebuilt, tinkered with the motor, but it has the original upholstery that has been painted one time,” he said. “I bought it with the understanding that it supposedly only had 21,000 miles on it at the time, but I couldn’t verify it.” 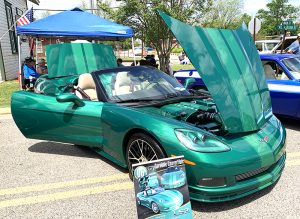 A dark-green 2006 Chevy Corvette Convertible on display at the show. It is owned by Sherrie Harville of Statesboro.
Photo by Ken Gustafson

He mentioned that the original owner in Montreal sold it to a man from Pennsylvania, who sold it to a guy in Mississippi. The owner from Mississippi sold it to a man in Mobile, Ala., who brought it to Moultrie, Ga., where Hanks bought it. He had done a lot of restoration work with it since he bought it. Hanks ended up winning a Best of Show award for his work and maintenance of his 1962 Pontiac Parisian. 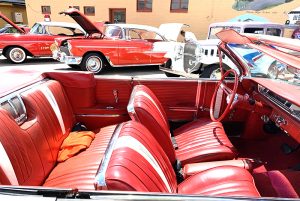 There were also cars on display from the 1930s and even the 1920s. Greg Reusch drove up from St. Augustine, Fla., to enter his 1928 Ford Model A into the show. “I bought it about nine months ago. It actually was a barn find,” Reusch said. “I just cleaned it up, put a few odds and ends on it, and here it is.” 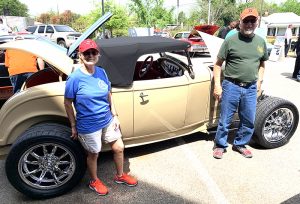 Jean Lancaster, left, and Kurt Lancaster, at right, standing with their 1932 Ford Roadster. The Lancasters won one of the Judges’ Choice awards.
Photo by Ken Gustafson

Kurt and Jean Lancaster from Bonaire, Ga., came down to Plains with their 1932 Ford Roadster. They ended up winning an overall Best of Show award as their efforts in restoring the vehicle paid off. “It has a 302 Ford engine, which was taken out of a 1990 Mustang with an AOD transmission,” Kurt said. “It has an eight-inch Ford rear axle in the back. It has a Pete & Jakes chrome front suspension on it. The paint is a new beige color off of a Toyota Tacoma. It’s built to drive.” 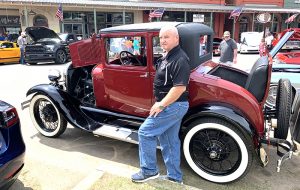 Greg Reusch of St. Augustine, Fla., standing next to his restored 1928 Ford Model A.
Photo by Ken Gustafson

While there were several automobiles from the 1920s up through the 1970s at the show, there were also vehicles from more recent years as well. Jack Williams came all the way from Olive Branch, Miss., to show off his 2011 Corvette Grand Sport. 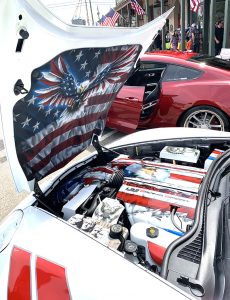 The engine of Jack Williams’ 2011 Corvette Grand Sport was painted in the design of the American Flag.
Photo by Ken Gustafson

Williams had a patriotic theme in mind as he made the preparations to present the car at the show. The engine was painted in the style of the American flag, as was the inside of the hood. “When I got it, I wanted to give a tribute to the founding of America,” Williams said. “The engine represents the very beginning of our founding.” 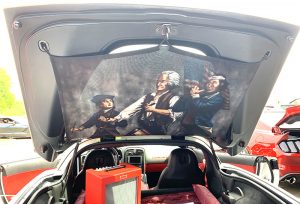 A painting of some brickmen during the time of the American Revolution on the inside of the trunk of Williams’ vehicle.
Photo by Ken Gustafson

On the inside of the trunk, there was a painting of some brickmen from the time of the American Revolution. “This is when the people who were actually not in the military wanted to support General Washington and the rest of the soldiers,” Williams said. “They marched and they called this ‘The Birth of Liberty.’ They marched and supported the revolution and that was the turning point of the war. That’s the theme I tried to present, same thing with the engine.” 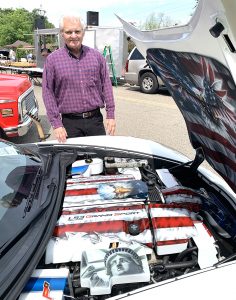 Jack Williams of Olive Branch, Miss., stands next to the ‘patriotic engine’ of his 2011 Corvette Grand Sport. Williams won a Best of Show award for his work.
Photo by Ken Gustafson

There were numerous other vehicles from the 1920s all the way up to almost present day. Stock cars, modified cars, street rods, trucks, and motorcycles were all on display for people to see. 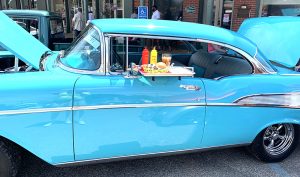 Like the spring car show last year, it was a time of fun, food, and fellowship for everyone. The SAM Shortline train brought visitors in from Cordele so that they could enjoy the train ride to Plains and see all of the different makes and models of the vehicles.

TIFTON — Over $15,000 in college scholarships, back-to-nature field trips, and a true taste of college life will be on... read more