AMERICUS – For three Southland Academy seniors: George Wall, Ross Minick and Freddie Updike, it was a memorable Senior Day experience at Southland Academy on Saturday, April 20. They were able to help lead the Raider baseball team to a 6-1 victory over the Brookwood School (BS) to secure a spot in the Georgia Independent School Association (GISA) Class AAA State Tournament as the No. 3 seed out of Region 3-AAA.

The game against the Warriors was supposed to be played on Friday, April 19, but was postponed for one day due to rain.

“I just appreciate Ross Minick, Freddie Updike and George Wall. They’ve done a great job for us,” SA head coach John Brady said. “They are great leaders, great kids and good people. They’re going to do great things in life. I appreciate everything they’ve done for our program.”

All three players, along with members of their families, were recognized in a pre-game ceremony. 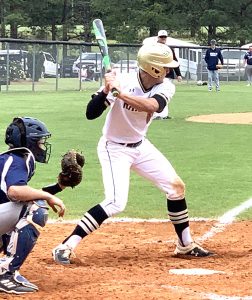 SA senior George Wall at the plate for the Raiders. Wall went 1-for-3 with an RBI single and scored a run on Senior Day.
Photo by Ken Gustafson

The Raiders jumped out to an early 3-0 in the bottom of the first inning. With one out, Wall reached on an error. A pitch hit Luke Law and Landon Law doubled to center field, scoring Wall to give the Raiders a 1-0 lead. Hunter McCain followed that up with a two-run single to give SA the early 3-0 lead.

The Raiders added to their lead in the bottom of the second. Chase Ledger singled to center field to lead off the inning. After Updike hit into a fielder’s choice, Tyler Kennedy singled to left field, scoring courtesy runner James Griffin. Luke Law would later drive home another run on a single to give the Raiders a 5-0 lead.

The Raiders added another run in the bottom of the third when Wall drove in an RBI on a single to complete the scoring for SA. 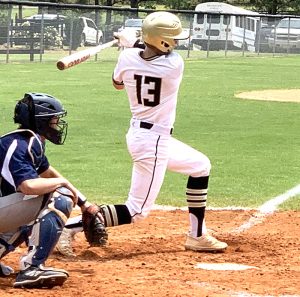 Southland second baseman Freddie Updike at the plate for the Raiders. Updike went 1-for-3 with a single on Senior Day.
Photo by Ken Gustafson

Six runs was more than enough for eighth grader Chase Ledger, who started on the mound for the Raiders. Ledger pitched four innings, giving up no runs on six hits. He walked three, but struck out two batters. Luke Law came on in relief of Ledger in the fifth. Law pitched three innings, giving up one earned run on one hit. He walked two and struck out four Warrior batters.

“It was a good win. We’ve had two days in a row of really good batting practice,” Brady said. “I expected it to show up today and it did. We swung the bats well the whole game, but especially early. We played tremendous defense. We haven’t made an error in a while. I think that’s four straight errorless games we’ve had. Our pitchers competed hard and battled hard. We’ve got that No. 3 seed wrapped up. We’ll see where that takes us, but it has been a good year. We’re excited.”

For the Warriors, Jacob Lauderdale went 2-for-4 at the plate with two singles. 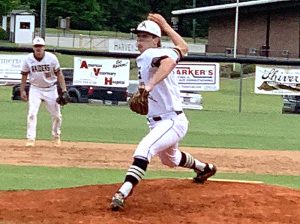 Joe Parker started on the mound for BS. Parker pitched 1.2 innings, giving up five runs on five hits. He walked two batters and struck out one. The Warriors will now have to play Valwood in a play-in game to determine who will get the No. 4 spot in the state playoffs out of Region 3-AAA. 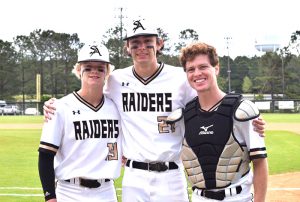 As a result of the win, the Raiders are now 11-7 overall and 4-4 in the Region 3-AAA standings. They finish the regular season in third place in the region and will play their first round playoff series on the road at either the Heritage School in Newnan or Dominion Christian in Marietta. Before that, however, they have their final regular season game at Westfield on Wednesday, April 24. First pitch is scheduled for 6 p.m.

From Staff Reports   ELLAVILLE – It took 12 innings to decide it, but it was better late than never... read more