Cougars jump out to double-digit lead to beat Schley County 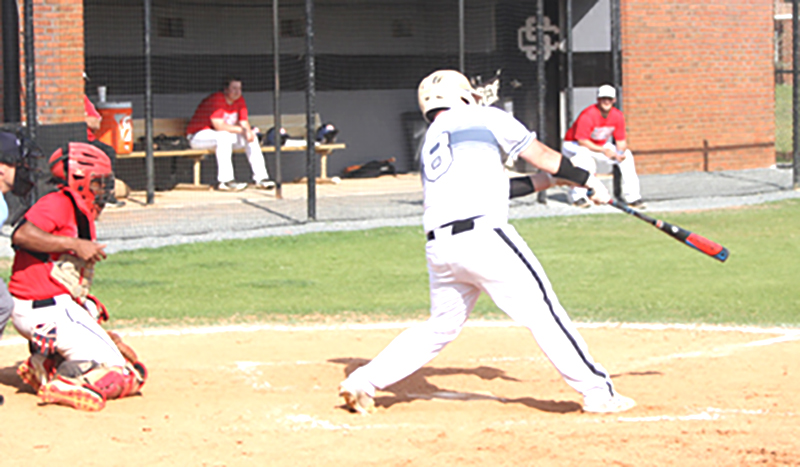 Schley County’s Dylan Windham seen here in a previous game. Windham had the best day at the plate for the Wildcats, as he went 3-for-4. ATR Archive

COLUMBUS – Having lost two straight games to the Wildcats, the Brookstone Cougars let out their frustration by swinging the bat and taking advantage of four Schley County errors to defeat the Wildcats 11-2 in the third game of a three-game region crossover series on Saturday, April 20, at the Brookstone School (BS) in Columbus.

In spite of the loss, the Wildcats clinched the Region 4-1A championship when they won the first two games of the three-game series.

The Cougars jumped out to a 10-0 lead. Despite nine hits by the Wildcats, they could only muster two runs. BS scored three runs in the first, five in the second and two in the third to jump out to the big lead. The Wildcats were finally able to score two runs in the top of the fourth. With two outs, Lorne Barineau reached on an error, followed by a single by Trypp Lumpkin. With runners at first and second, Logan Wurtz drew a walk to load the bases. Garrett Peavy then singled to left field, driving in two runs. Unfortunately for the Wildcats, that would be all the scoring they would do for the rest of the game.

The Cougars (19-8) added another run in the bottom of the fourth to complete their victory. Dylan Windham led the offensive attack for the Wildcats. Windham went 3-for-4 at the plate. Dylan Taylor also had multiple hits as he went 2-for-4. However, the Wildcats were unable to get run production.

Peavy, who started on the mound for the Wildcats, gave up six runs on one hit. Three of those runs were earned, as the SC defense was not up to the task in this game.

SC will now turn their attention to the first round of the GHSA Class A-Public State Playoffs. According to the GHSA playoff bracket, the Wildcats are a No. 1 seed and will host their first round playoff series on Thursday, April 25. Time and opponent are still yet to be determined.