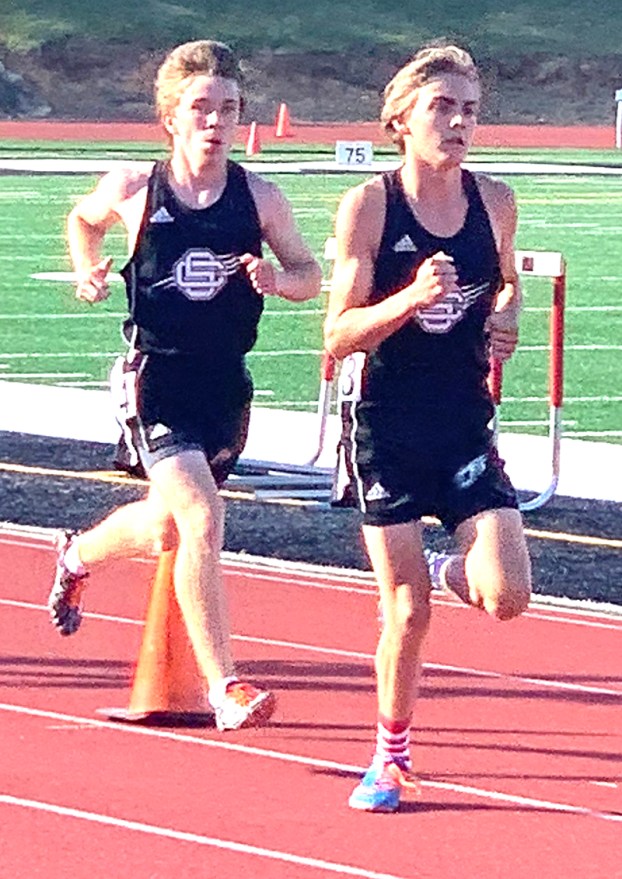 The race was supposed to have been completed along with the rest of the other events in the Area 1-1A Public Meet held on Monday, April 22. However, during Monday’s running of the race, a meet official rang the bell to signal the last lap on the seventh lap instead of the eighth lap, which is the last lap in the event. Williams finished in first place, followed by Pinckard, but due to the discrepancy regarding the bell, the race results were disallowed and the event had to be done again on Wednesday.

In the “do-over”, the results for first and second place ended up being the same. Williams won the event and finished with a personal record of 11:04.86. Pinckard finished right behind Williams. He also set a personal record with a time of 11:11.44. “I knew that the two guys in the first and second spots had a good kick. I wanted to get as much distance between me and them before the final lap,” Williams said.

For Pinckard, his strategy was the same as in the mile race (1600-Meter Run). “I took it slow and stayed with the pack. I just went out and finished at the end,” Pinckard said. Trimyrn Williams of Terrell County finished in third place with a time of 11:18.55, followed by fourth-place finisher Jaquez Jones of Baconton Charter (11:19.34). The top four finishers qualify for the event in the state meet.

The SC boys’ team had already clinched the Area 1-1A Championship as they earned the most points of any team. However, with Wednesday’s results, the Wildcats finish with a total of 133 points. They finished 42 points ahead of second-place finisher Terrell County (91).

For Williams and Pinckard, as well as the rest of the SC boys and girls track and field athletes, they will now turn their attention to the GHSA Class A State Meet to be held at Hugh Mills Stadium in Albany Thursday through Saturday, May 9-11.