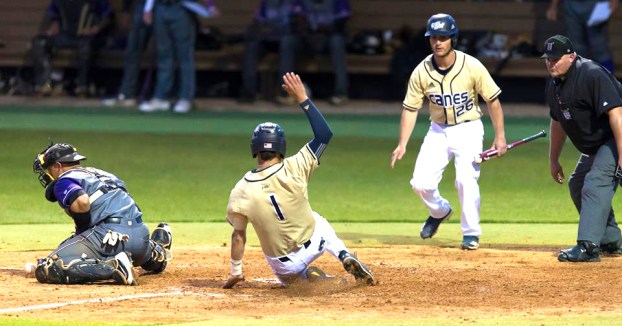 GSW third baseman Tyler Skelton seen here sliding home safely in a previous game. Skelton went 6-for-14 at the plate in the three-game series against UNCP. Photo by GSW

AMERICUS – The Georgia Southwestern State University Baseball Team finished the regular season on a positive note by winning two out of three games against the University of North Carolina Pembroke. The three-game series took place Saturday and Sunday, April 27-28, at Hurricane Stadium.

GSW lost the first game of a Saturday double header 2-1, but won the second game by the score of 11-10.

Under first-year head coach Josh McDonald, the 2019 Hurricanes have won at least double the amount of games they won in 2018 and have almost doubled their win total of conference games as well. In 2018, GSW went 10-35 overall and 5-25 in the PBC. As a result, they did not qualify for the 2018 Peach Belt Conference Tournament.

In Game 1 against UNCP, the Hurricanes struggled to score in a low-scoring pitchers’ dual and lost 2-1. GSW broke a scoreless deadlock in the bottom of the third inning. With two runners on base, Hunter Foster singled to left field, scoring Jason Baita to put the Hurricanes on the board. However, the Braves struck back in the top of the top of the eighth inning with two runs. With one man on, Zach Ghelfi belted a two run home run to give the visitors from North Carolina a 2-1 lead. It would be a lead they would hold on to for the win.

GSW starting pitcher Tucker Smith took the loss and is now 8-3 on the season. In spite of the loss, Smith pitched an outstanding game. He gave up two earned runs on six hits. He didn’t walk any batters and struck out four.

Both Baita and Tyler Skelton went 2-for-4 to lead GSW’s offense, with Baita scoring the Hurricanes’ lone run.

The Braves were led offensively by Jarratt Mobley and River Ryan. Mobley went 2-for-3 at the plate and Ryan went 2-for-4. Ghelfi went 1-for-3 with the two-run home run. Landen Smith starting on the mound for the Braves. He pitched four innings and gave up one earned run on five hits. He walked two batters and struck out three.

Jacob Morrison came on in relief of Smith and ended up getting the win. Morrison gave up no runs on one hit. He walked one and struck out five GSW batters.

Nile Ball came on to get the save for the Braves. He pitched 0.2 innings, giving up no runs or hits. He walked none and struck out none. 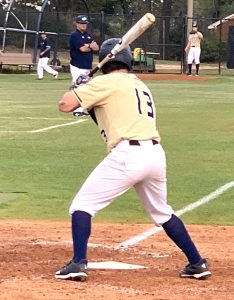 GSW second baseman Jason Baita went 9-for-15 at the plate and drove in two RBIs during the Hurricanes’ three-game series against UNCP.
Photo by Ken Gustafson

However, the Braves did not quit. They exploded for six runs in the top of the eighth inning to make things interesting. However, the Hurricanes were able to hold on and win by the score of 11-10.

GSW first baseman Bradley Hough had a tremendous game at the plate. Hough went 4-for-5 with two RBIS and scored a run. Jason Baita went 3-for-5 with a walk, scored two runs and drove in an RBI. Right fielder Jonathan Martin also had a solid day offensively. Martin went 2-for-3 with a triple, an RBI and scored three runs. Tyler Skelton went 2-for-4 at the plate and scored three runs. In total, the Hurricanes scored 11 runs on 16 hits and committed one error. The Braves scored 10 runs on nine hits and committed one error.

A.J. Hayes got the start on the mound for GSW, but was removed quickly after giving up three runs on one hit and three walks. Cole Garrett came on in relief of Hayes. He pitched 6.2 innings, giving up four earned runs on five hits, including a home run by River Ryan in the fifth inning. He walked two and struck out three. Garrett ended up getting the win and is now 3-4 on the season.

Ryan had another multiple-hit game for the Braves, including another home run.

Game 3 on Sunday belonged to GSW. The Hurricanes scored 13 runs on 18 hits and took advantage of three UNCP errors. Up 2-0 in the bottom of the third, the Hurricanes scored four more runs to take a 6-0 lead. Andy Moore, Bo Halcomb, Matthew Mamatas and Jacob Harrell all drove in RBIs for the Hurricanes in the bottom of the third. GSW added two runs in both the fourth and fifth innings, plus three more in the seventh to secure the 13-4 victory in the rubber game of the series.

Baita led the Hurricanes offensively by going 4-for-6 at the plate and scoring two runs. Halcomb went 3-for-4 at the plate, scored two runs and drove in three RBIs.

Timberlake started on the mound for GSW and got the win, improving his record to 2-3. He pitched four innings, giving up no runs on two hits. He walked none and struck out three batters.

The Hurricanes will now wait for other teams in the PBC to complete their regular season schedules before they find out if they will qualify for the Peach Belt Conference Tournament. The tournament will take place Friday through Sunday, May 10-12, in St. Augustine, FL.