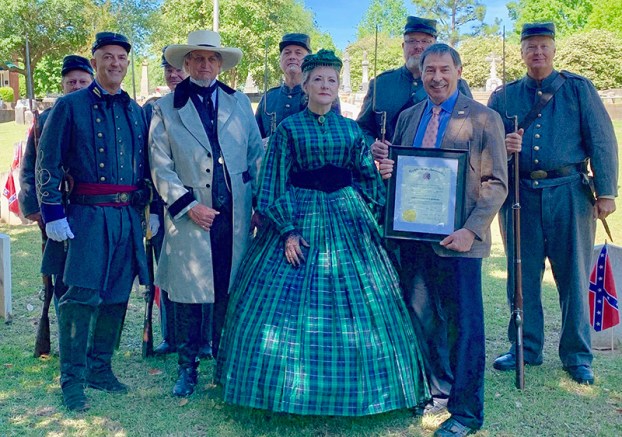 SCV Camp 78 Honor Guard is shown with, front row, from left, Camp Commander John Carroll, speaker Scotty Myers and his wife Tammy, and state Rep. Mike Cheokas, R-Americus, who received a Certificate of Appreciation for his support of monuments protection legislation signed into law on April 26.

AMERICUS — The Annual Confederate Memorial Service, sponsored by Alexander H. Stephens Camp, Sons of Confederate Veterans (SCV), in Americus, was held at 10:30 a.m. Saturday, April 27 at Oak Grove Cemetery at the Confederate Plot. The event was open to the public. 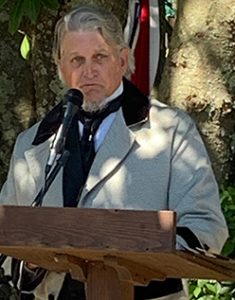 Guest speaker was Col. Scotty Myers of Alexander City, Ala., who has portrayed President Jefferson Davis at the First White House of the Confederacy in Montgomery for several years and at Confederate Memorial observances and events. Event organizers with Camp 78 said Myers’ motivation is to have southern history presented accurately. He and his wife Tammy and two sons raise cattle on land that has been in his family for five generations.
According to a law passed in Georgia in 2009, April is Confederate History and Heritage Month. For over 125 years, Confederate Memorial Day, April 26, has been a state holiday. For the last several years, the Monday before April 26 has been selected as the Confederate Memorial Day state holiday.
The SCV Camp Commander is John Carroll.