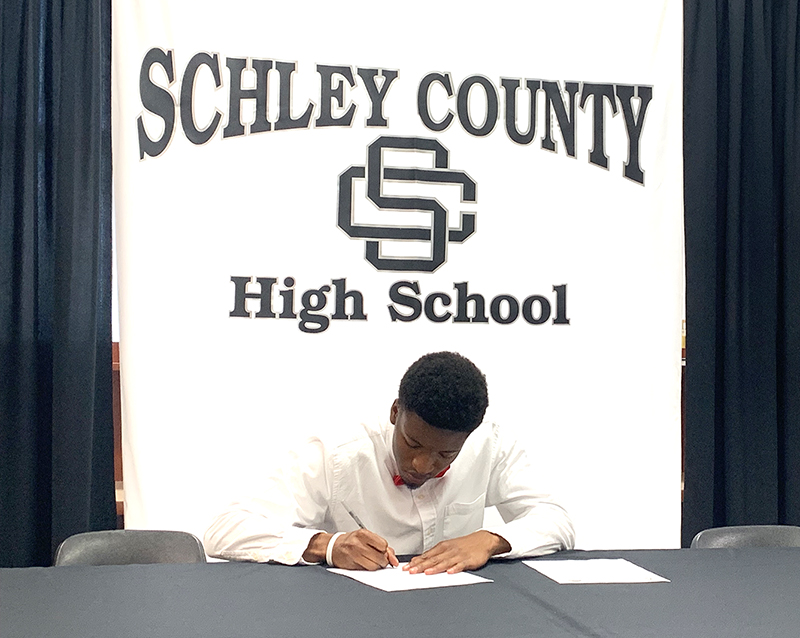 ELLAVILLE – Schley County track & field standout Jackson Fulks signed a letter of intent on Wednesday, May 1, to continue his education and run track at Columbus State University. The signing took place in the media center on the campus of Schley County High School (SC).

Fulks was also recruited by Clayton State and Albany State, but has decided to take his talents to Columbus to run for the Cougars. “I just liked the campus. It’s close to home and I liked the coaches,” Fulks said. Fulks is undecided as far as what he will be majoring in, but would like to go into marketing or accounting after he graduates.

Fulks has had a stellar career on the track for the Wildcats. He holds the record for the fastest time in school history in the 200-meter dash (22.19). He also ran the fourth fastest 400-meter time in school history (51.74) and was a member of the SC 4×100 meter relay team that set a school record in the event (43.57). 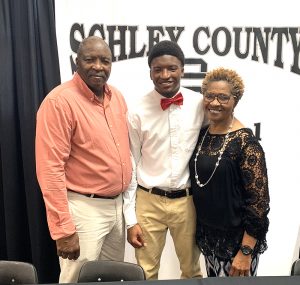 “Jackson has been an incredible track athlete for us,” Burgess said. “I’ve been coaching varsity for three years and we’ve been fortunate to win region for the past three years. Jackson has been one big reason for that. Anybody that can make state in all five events is a pretty impressive athlete. You can compare his numbers with anybody across the state and he’s way up there.” 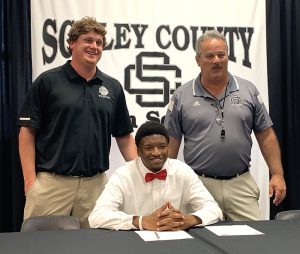 Jackson Fulks with his coaches after signing scholarship to compete at Columbus State. Head boys coach Scott Burgess is on the left. Girls’ head coach Jim McFather is on the right.
Photo by Ken Gustafson

Fulks will have an opportunity to add to his accomplishments when the Wildcats compete in the Georgia High School Association (GHSA) State Meet Thursday through Saturday, May 9-11, at Hugh Mills Stadium in Albany.

SC girls’ head track coach Jim McFather said that Fulks has not only excelled on the track at SC, but has also distinguished himself in his character. “He is just as good on the inside,” McFather said. “He’s a humble person and that takes you a long way in life. We’re going to miss Jackson. They’re getting a treasure up there at Columbus State. He’s going to make us all proud here at Schley County because he is going to work hard.”