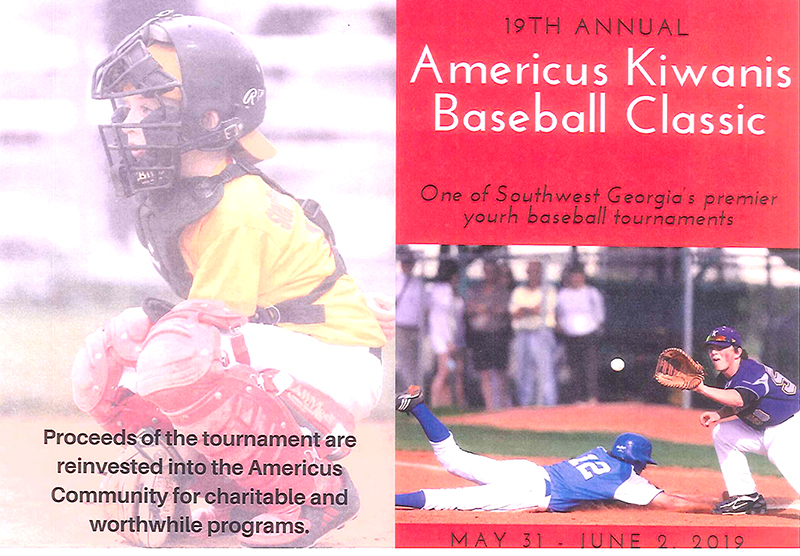 AMERICUS – Friday through Sunday, May 31 through June 2, the Kiwanis Club of Americus (KCA) will be hosting its biggest fundraiser of the year. It’s the 19th-annual Kiwanis Baseball Tournament, one of Southwest Georgia’s premiere youth baseball tournaments. It will be played at the Sumter County Parks and Recreation Department (SCPRD) baseball complex, located on US Highway 19 South.

Judge Rucker Smith is the Tournament Committee Chairman and President-Elect of the KCA. He will be the organization’s 100th president. According to Smith, they expect to have more teams show up to participate in this year’s tournament than they had last year. “We had 17 teams show up last year, but we’re expecting over 20 teams to come and compete this year. Over 250 young athletes under the age of 12 will be enjoying the excitement of athletic competition,” Smith said.

Smith went on to say that the tournament is to be held the weekend before the Georgia State District tournaments are played. “It’s a good opportunity for teams to get in a last tune up before the official State competition begins,” He said.

The tournament will feature four different age groups: 12 & Under Live Pitch (Midget), 10 & Under Live Pitch (Mite), 10 & Under Machine Pitch at 46 mph (Mite) and 8 & Under Machine Pitch at 40 mph (FLEA). “This is the biggest athletic event that most of these participants have ever been involved in,” Smith said. “Imagine being an eight-year-old and leaving your home town to travel to Americus and compete for the first time with teams from all across Southwest Georgia.”

The team entry fee is $160 and all team members and coaches will receive an event t-shirt. The deadline for a team to register for the tournament is Thursday, May 30. The games will be played under Georgia Recreation and Parks Association rules and certified umpires will adjudicate the games. Admission is $5 for adults per day or $8 for the weekend. Admission for students and seniors is $3 per day or $5 for the weekend.

Sumter County Parks and Recreation Director Tim Estes is excited about the impact that the tournament will have in the community. “For many years, this tournament has had a tremendous economic impact for our community,” Estes said. “The Kiwanis Club of Americus always does a good job of managing the tournament.”

All of the proceeds from the tournament will go to invest in charitable causes that benefit the youth of Americus and Sumter County. “This is our largest annual fundraiser and we appreciate the community’s support,” Smith said. “I want to thank Tim Estes and Jeff Fussell of the Sumter County Recreation Department for co-sponsoring this event and for all the many things that they do to make this tournament a success. I also want to thank them for what they do for the many young athletes of Sumter County.”

There are opportunities for local business owners to be recognized at the tournament. According to Smith, the opportunity is there for people to be recognized as a sponsor at events hosted by the KCA throughout the year. Each event held meets the goal and purpose of “Serving the children of the world and of Sumter County.”