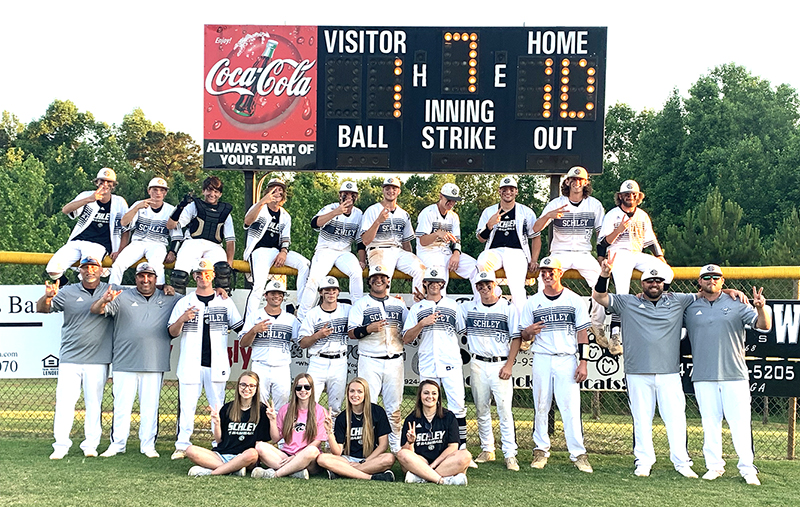 The Schley County Baseball Team poses for pictures underneath the scoreboard after defeating Irwin County 10-1 to secure their spot in Monday’s State Championship series against Gordon Lee. Photo by Ken Gustafson

ELLAVILLE – Behind the strong pitching of senior Lorne Barineau, the Schley County Wildcats took control early and won Game 3 over Irwin County (IC) by the score of 10-1 on Wednesday, May 15. As a result, the Wildcats won the best-of-three-game series against the Indians and will advance to the Class A-Public State Championship.

It’s the second time in two years that the Wildcats will be headed to the state championship. The last time they were there in 2017, they swept Gordon Lee in two games to capture the state title.

The Wildcats split with the Indians on Tuesday, May 14. SC won Game 1 by the score of 6-3, but lost the second game 6-0, forcing a third and deciding Game 3 on Wednesday. All three games were played at Schley County High School.

In addition to winning the series to advance to the state championship, SC head coach Chuck Cheek earned his 400th career victory when his team won the deciding Game 3 over the Indians. “I didn’t know about the 400th win. I’m just proud of our guys. This is all about them,” Cheek said. “Lorne came out and pitched a tremendous game. We had a bunch of guys get some huge hits for us. I’m so proud of them. There was a lot of adversity in this series. The fans from Irwin County were pretty intense. Our guys had a tough time maintaining their focus yesterday (Tuesday). We did a much better job of that today. In the one inning where we got it going, we just executed very well. We got some bunts down and we had some timely hits. Some guys drove some runs in when it counted. I’m so proud of them right now.” 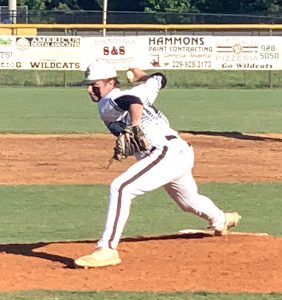 Schley County senior pitcher Lorne Barineau gave up one run on three hits and struck out six batters in the Wildcats 10-1 win over Irwin County to clinch a berth in the state championship.
Photo by Ken Gustafson

The score was tied 0-0 going into the bottom of the third inning. Michael Wainwright led off the inning with a ground-rule double. Garrett Peavy then reached on an error, advancing Wainwright to third. Wainwright scored the game’s first run on a wild pitch by IC starter Keegan Folker. Later in the inning, Dylan Taylor belted an RBI double and Dylan Windham drove in a run on a single to give the Wildcats a 3-0 lead.

The Indians scored their first and only run of the game in the top of the fourth. Gabriel Benyard led off the inning with a single and stole second base. Brodie Chestnutt then singled, advancing Benyard to third. Wright Walker then hit into a fielder’s choice to score Benyard. 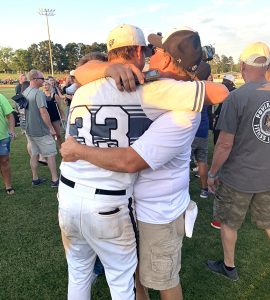 The Wildcats responded by adding three more runs in the bottom of the fourth. Trypp Lumpkin led off with a single, followed by a bunt single from Wainwright. Peavy then singled to load the bases for Dakota Albritton. Albritton took advantage of the situation by driving in two runs on a single to center field. Later on with two outs, Trent Bivins was able to draw a walk off IC relief pitcher Zach Smith to load the bases. Ashton Goodin then drew a walk, scoring Peavy from third to give SC a 6-1 lead. The Wildcats scored three more runs in the fifth and one in the sixth on a solo home run by Goodin to seal the deal.

Barineau was in control the whole way for the Wildcats. He pitched the entire game and gave up one run on three hits. He struck out six Indians and only walked one.

“I just wasn’t going for strikeouts. I wanted to allow the ball to be put in play and let my defense do the work,” Barineau said. “It feels good to get back to the finals. I was just a sophomore the last time we went and now I’m a senior. It feels better.” Barineau went on to say that after the Wildcats lost Game 2, they were ready to fight their way into the finals. “We love to fight. We love the intensity. We have great intensity. This is fun,” Barineau said. 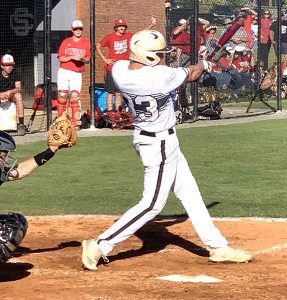 Michael Wainwright belted a ground-rule double in the bottom of the third inning of Game 3 to ignite the Wildcats’ offensive attack.
Photo by Ken Gustafson

The Wildcats scored 10 runs on 12 hits and committed one error. The Indians were held to one run on three hits and committed four errors. Peavy, Albritton, Taylor and Wainwright each had two hits in Game 3. Albritton and Taylor drove in two RBIS on the day.

In Game 1 on Tuesday, The Wildcats scored four runs in the bottom of the first, but had to hang on for a 6-3 win as the Indians closed the gap with three runs in the top of the fifth inning. In the bottom of the first, Peavy and Albritton both singled. Then Taylor drove in a run on a single to give SC a 1-0 lead. Then with runners at first and third with no outs, Dylan Windham belted a three-run home run to extend the lead to 4-0.

However, the Indians came back in the top of the fifth with three runs of their own. The Wildcats responded with two runs in the bottom of the sixth inning. With one out, Trypp Lumpkin reached first base as a result of being hit by a pitch. After Wainwright grounded out for the second out, Peavy drove in a run on a single to right field to give SC a 5-3 lead. Albritton followed that up with another single. Then Taylor doubled to right field, scoring Peavy and giving the Wildcats a 6-3 lead. 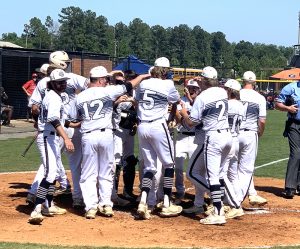 Schley County’s Dylan Windham is mobbed by his teammates as he crosses home plate after belting a three-run home run to lead the Wildcats to a 6-3 win in Game 1 over Irwin County.
Photo by Ken Gustafson

Barineau came in to pitch in the top of the seventh. After Cam Vickers reached on an error, Barineau was able to get Chestnutt to ground out and Walker to fly out. Barineau then closed the door on Game 1 by striking out Folker.

The Wildcats struggled in Game 1 defensively. They committed five errors. However, Albritton led the team offensively by going 3-for-4 at the plate and scoring a run. Peavy and Taylor each had two hits. Taylor drove in two RBIs, while Peavy scored two runs and drove in another.

Dylan Taylor pitched six innings in a starting role and gave up three runs on eight hits. He struck out nine batters and walked only one. 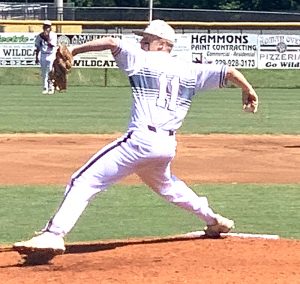 Dylan Taylor struck out nine batters over six innings of work to lead the Wildcats to a 6-3 win in Game 1 over Irwin County.
Photo by Ken Gustafson

Things fell a part for the Wildcats in Game 2. The Indians scored one run in the first, four in the third and one in the sixth to win 6-0 and force the deciding Game 3. However, the Wildcats responded with a championship-type effort to win the deciding third game and the series.

With the Game 3 win on Wednesday, the Wildcats improve their overall record to 28-5. SC will face the two-time defending state champions, the Trojans of Gordon Lee (30-4), in the Class A-Public State Championship on Monday, May 20, at Grayson Stadium in Savannah. It is a rematch of the 2017 State Championship. “They (Gordon Lee) are really good,” Cheek said. “They are pitching-heavy. They are last year’s state champions and they are the same team that we faced in the 2017 State Championship. They have been there for years. They have a great team and they’ve been No. 1 in the state all year long for a reason. We are going to have our work cut out for us.”

: Lorne Barineau tags out an Irwin County base runner in Game 1.
Photo by Ken Gustafson