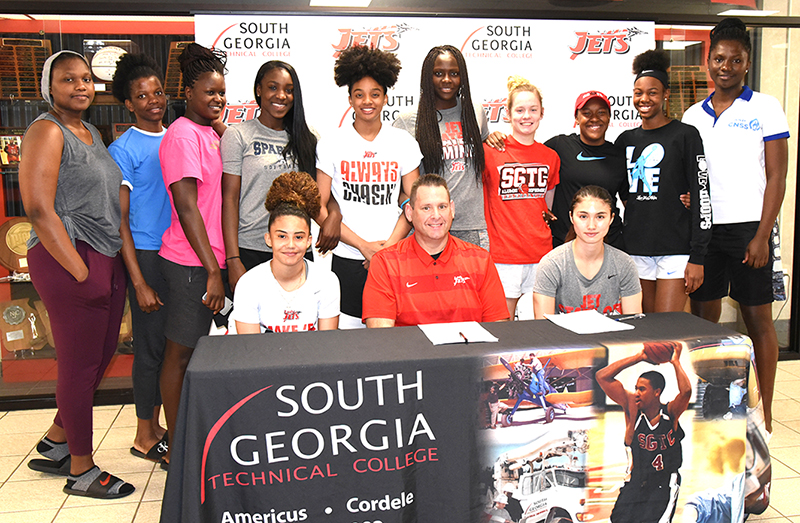 The signings took place on Friday, May 10, at SGTC.

“It’s a bittersweet day for me,” SGTC Athletic Director and Women’s head basketball coach James Frey said. “I am very happy for both of these young ladies, as well as our other four sophomores who have all signed scholarships to continue their education and playing careers, but I am going to miss them. Any time you have all five starters sign at the Division 1 level and then our sixth sophomore, who was injured and red-shirted this season, signs with Wesleyan College, you know you had a good group of players and people. There are probably less than one or two junior colleges who had all five starters from a single season receive scholarships with Division 1 universities.”

Nieves, a 5’7 guard from Tampa, FL, played two years for the Lady Jets. Nieves will be joining Morehead State, a program that has won the second most games in the Ohio Valley Conference (OVC) since 2016 and qualified for the Women’s National Invitational Tournament twice. MSU defeated Ohio State in the opening round of the 2019 WNIT.

The All-American guard led SGTC to 59 wins in her two seasons at SGTC and set multiple records on the court. During her sophomore season, Nieves averaged 15.1 points per game and 4.7 rebounds per game. She also set records for points in a game (41) and three-pointers made in a game (11). As a result of her accomplishments, Nieves earned NJCAA All-American honors following her sophomore season.

Hill, a sophomore guard from Aichi, Japan, transferred to SGTC from Tallahassee Community College. While at TCC, Hill was part of a team that won a national championship. Hill earned the Most Valuable Player of the Year honor for the Lady Jets this past season and helped lead the team to their best record ever at 30-4.

“We are excited to welcome Mari to our Bowling Green women’s basketball family,” BGSU women’s head coach Robyn Fralick said. “She brings great experience and success to our program. She does a great job of creating for others and has a high feel for the game. We are thrilled to have her join us.”

“I am proud of each and everyone of these young ladies,” Frey said. “They have made an impact on our program and I feel confident they will do the same thing at the next level. Coach Conyers and I wish each of them the best and I look forward to attending their next graduation.”