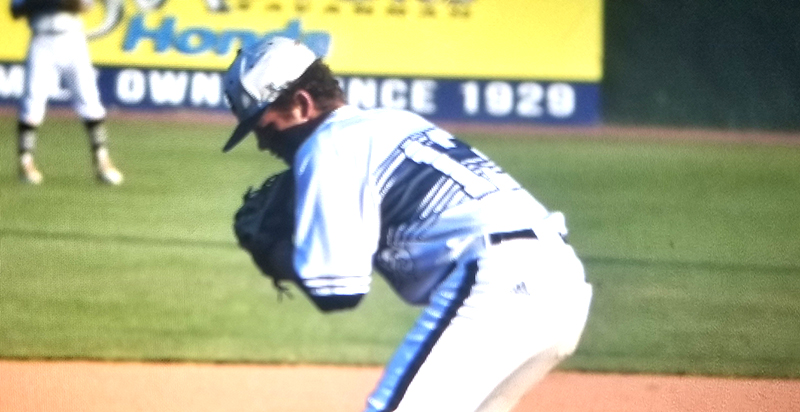 Schley County starting pitcher Lorne Barineau struck out five batters to lead the Wildcats to a 3-2 victory in Game 2 of the Class A-Public state championship series. Photo by Kricket Barineau

SAVANNAH – Thanks to outstanding pitching by Lorne Barineau, the Schley County Wildcat baseball team was able to win the second game by the score of 3-2 over Gordon Lee (GL) in the GHSA Class A-Public State Championship series. The Wildcats got shut out by the Trojans in Game 1 by the score of 3-0.

Both games were played on Monday, May 20, at Grayson Stadium in Savannah.

The series is now tied 1-1 and the third game to decide the state championship will be played on Wednesday, May 22, at 4 p.m. in Savannah.

The Trojans (31-5) are the defending 2018 state champions. They swept Telfair County a year ago to claim the crown.

The Wildcats (29-6) won the Class A-Public state title two years ago. In doing so, they swept the Trojans in two games by scores of 6-0 and 10-2. Should the Wildcats win Game 3 on Wednesday, they will have won the state title two out of the last three years.

In Game 1, the Wildcats had an extremely difficult time trying to figure out GL starting pitcher Jake Wright. Wright dominated on the mound for the Trojans, striking out 13 Wildcat batters and giving up only two hits. 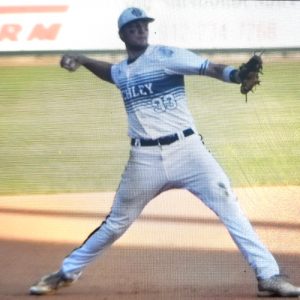 Those two hits came from Barineau in the bottom of the third and Trypp Lumpkin in the bottom of the seventh. The Wildcats had runners at first and second with two outs in the bottom of the seventh. Lumpkin stepped up to the plate to try to keep the Wildcats alive. He singled to right field and Ashton Goodin motored around third to try and score. However, right fielder Cade Peterson’s throw to the plate was right on the money. Catcher Chris Potter tagged out Goodin for the final out of the game, but Goodin collided with Potter in such a way that it was deemed “malicious” by the home plate umpire. As a result, Goodin was ejected and missed Game 2. According to GHSA rules, he will have to miss Game 3 as well.

Dylan Windham came on in relief of Taylor. Windham pitched the seventh inning, giving up only a hit and a walk.

The Wildcats got off to a much better start in Game 2. In the top of the second inning, a pitch from GL starting pitcher Jake Poindexter hit right fielder Trent Bivins. After Lumpkin hit into a fielder’s choice, Barineau, the SC starting pitcher in Game 2, singled to put runners at the corners with one out. Bivins was able to score from third on a passed ball by Potter. The Trojans responded by tying the game at 1-1 in the bottom of the second. Brody Cobb doubled to left field to lead off the frame. Potter then singled to put runners at first and third. Griffin Collins was brought in as a courtesy runner for Potter. After Barineau struck out J.D. Day, Garren Ramey hit a sacrifice fly, scoring Cobb from third to tie the game.

The Wildcats responded in the top of the third inning with two runs to take a 3-1 lead. With one out, Garrett Peavy singled, followed by a single from Dakota Albritton. With runners at first and second with one out, Taylor doubled to left field, scoring Peavy and Albritton.

The Trojans scored one run in the bottom of the third. With two outs and a runner on second, Hunter Hodson belted a triple, scoring Will Sizemore to bring GL to within one at 3-2.

However, Barineau was able to keep the Trojans in check. In the fifth inning, GL was able to put runners at first and second with one out, but the submarine-style pitcher was able to get the next two outs.

Things got interesting in the bottom of the seventh. Barineau walked Ramey to lead things off. Jake Wright hit into a fielder’s choice, advancing courtesy runner Griffin Collins to second base. The Trojans had the tying run in scoring position with only one out.

However, Barineau was able to strike out Cade Peterson and Justin Wooden to end the game and keep the Wildcats’ hopes of a state championship alive.

Barineau pitched the entire game, giving up two runs on six hits. He walked one, but struck out five GL batters. Taylor went 1-for-3 at the plate, but his one hit was the crucial two-run double in the third. In addition to having a season-saving outing on the mound, Barineau also got it done at the plate by going 2-for-3 with two singles.