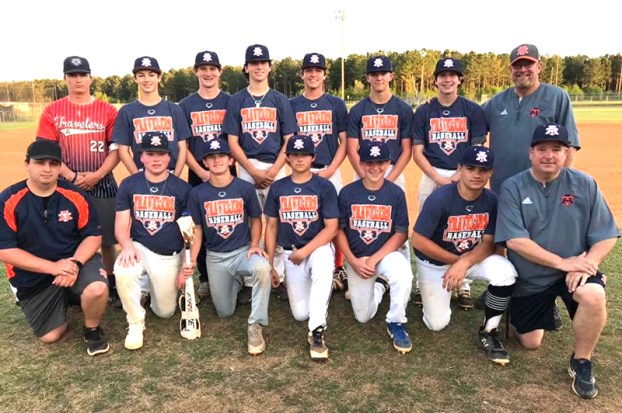 The Americus Travelers 14u travel baseball team made it to the semifinals of the Training Legends Fathers’ Day Classic. Photo by Angel Lamb

ALPHARETTA, GA – The Americus Travelers 14u travel baseball team posted a strong showing by making it all the way to the semifinals of the Training Legends Fathers’ Day Classic before losing to eventual tournament champions West Cobb Team RBI by the score of 7-0. West Cobb went on to beat the Acworth Warriors 3-1 to win the tournament.

The tournament took place Saturday and Sunday, June 15-16, at Webb Bridge Park in Alpharetta, GA. The Travelers are now currently 13-5-1 on the season and they finished the tournament in third place with a record of 2-1-1.

In spite of losing in the semifinals, head coach Tim Estes is extremely pleased with the progress his team is making as they prepare for the Training Legends Georgia State Travel Team Championship in Dacula, GA this coming weekend.

“We are learning each week what it takes to compete at the highest level of our age division. It’s frustrating at times and at other times, it’s very rewarding,” Estes said. “All of our tournaments leading up to the World Series are about preparing to compete on the national stage. I’m proud of the effort and the work our kids are putting in. My hope is that we will be prepared when we get to Panama City Beach on July 1. Estes is referring to the Grand Slam World Series of Baseball, which will be held Monday through Sunday, July 1-7, in Panama City Beach, FL.

On Saturday, June 15, the Travelers got off to a good start when they defeated West Cobb Team RBI 6-1. Tripp Thomas went 2-for-2 at the plate, including a two-run home run in the top of the third inning. Caden King also went 2-for-2 at the plate and scored two runs. Chase Ledger went 2-for-3 with a run scored and an RBI. Starting pitcher Owen Lamb got the win. He pitched 4.2 innings, giving up one run on four hits. He walked three and struck out five.

Later that day, the Travelers’ second game was against the Cobb Aces 14u team. This game ended in a 1-1 tie. The Aces took the lead in the top of the third on an error by Lamb. However, the Travelers responded in the bottom of the fourth. Ledger led off with a walk. After Thomas Willis struck out, Jack Clark drew a walk to put runners at first and second with one out. Lamb was hit bay a pitch, which loaded the bases for Caden King. King was also hit by a pitch, which allowed courtesy runner Jaxson Haire to score the tying run from third. The score remained 1-1 at the end of regulation, resulting in a tie.

The Travelers were limited to just two hits in this game from Clark and Thomas. Thomas started on the mound for the Travelers and gave up one run on three hits in three innings of work. Peyton Tompkins came on in relief of Thomas and pitched 0.1 innings. He walked one and struck out one. Landon Knight was the third and final pitcher used by the Travelers. Knight pitched 1.2 innings and struck our four batters.

In the first round of bracket play on Saturday, the Travelers scored five runs in the bottom of the fifth inning, but had to withstand a four-run comeback to hold on to an 8-7 win over the Charlie Culbertson Baseball 14u all-stars (CC). With the score tied 3-3 in the bottom of the third, Clark drove in an RBI single on a 3-1 count. This began a five-run barrage by the Travelers. However, CC responded with four runs in the top of the fourth inning and had the tying run at third with two outs. Fortunately for the Travelers, Thomas Willis came in to pitch and got the last out to end the game.

Both Lamb and Dylan Davis went 2-for-2 and scored two runs. Thomas went 2-for-3 with a double and drove in three RBIs. Caden King started the game on the mound for the Travelers. King pitched two innings and gave up two runs on two hits. He walked one and struck out none. Jaxson Haire came on in relief of King and ended up being the winning pitcher. Haire pitched 1.2 innings, giving up five runs on five hits. He walked three batters and struck out one. Willis was the third and final pitcher used by the Travelers. He pitched 0.1 innings and was able to get the final out of the game to preserve the win.

This put the Travelers into the tournament semifinals on Fathers’ Day, June 16. They would be facing West Cobb Team RBI in a rematch. However, the outcome was not the same as before. The boys from West Cobb scored five runs in the top of the sixth inning to secure the 7-0 win. The Travelers could only muster three hits compared to West Cobb’s 11. Thomas, Haire and Davis tallied the three hits for the boys from Americus. Ledger started the game on the mound and pitched 5.2 innings. He gave up seven runs on nine hits and struck out eight batters. Willis came on in the latter part of the game and gave up no runs on two hits. He walked none and struck out one.

The Travelers will now turn their focus to this weekend’s Training Legends Georgia State Travel Team Championship in Dacula, GA. The tournament will take place Saturday and Sunday, June 22-23.

Ken’s Column: No need for apologies from the US Women’s soccer Team

The US Women’s Soccer Team kicked off their defense of their 2015 World Cup title by clobbering Thailand 13-0 in... read more