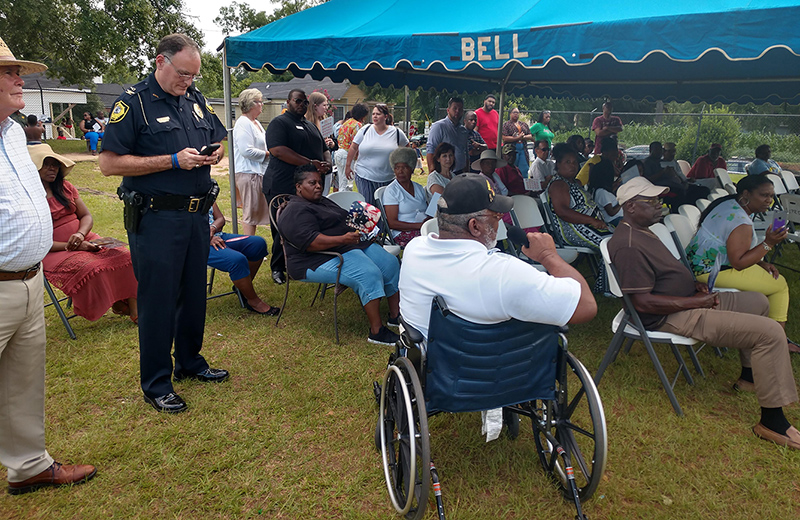 Standing at far left is former Americus Mayor Bill McGowan. Next to him is Americus Police Chief Mark Scott. Submitted by City of Americus

AMERICUS — Citizen engagement was the focal theme of the District 1 Town Hall held June 11 in McCoy Hill Park. Over 100 people — including youth, seniors, elected officials, governmental leaders, and others — gathered on a warm evening to hear what the city had to say. In light of the criminal behavior and neglect in the area, Council member Juanita Wilson felt it best to go to the place that is receiving so much attention. In doing so, she showcased the many positive areas of McCoy Hill Park to include, the basketball courts, ample picnic areas, pavilion, playground, and other amenities. “This is our first step to stop the negative we have heard about in McCoy Hill and let our residents know that they have a right to expect a safe community and we will do all that we can to make that happen,” said Wilson. “It’s time to work together to help the young people find the path to honesty, respect, and crime-free behavior while offering options to our seniors, too.” She urged everyone to stop letting acts of violence set a tone for the community.

Joining Wilson was City Manager Charles L. Coney and several department heads who presented their individual backgrounds and the operations that they are responsible for. Coney offered that this atypical Town Hall was to get quality feedback from the residents about how they would like to see their community. He, along with the council, are committed to listening and using the information gathered. “It really comes down to communication,” he said. “The public doesn’t always understand why the city makes some of its decisions and we [government] may not understand what people really value when it comes their community. Sessions like this allow us to hear each other.” Each featured department head went in-depth to provide insight on processes, services, and goals. Attendees were enlightened to services like free smoke detectors and blood pressure checks by Fire Chief Roger Bivins, and opportunities to usher at the Rylander Theatre by Managing Director Heather Stanley. Residents were educated on blight and how to report neglected, deteriorated properties to the Code Enforcement Department led by Chief Building Official Roger Willis and how to submit an Open Records Request as well as how to serve on city sponsored committees and boards by City Clerk Paula Martin.

Tired of feeling like hostages in their own neighborhood, some residents came out to hear what the city is doing to rebuild the park’s reputation and return it to the community asset it had once been. Citizen James Milliner gave a historical reference point in that McCoy Hill Park once housed the McCoy Hill Elementary School which was a focal point of learning and culture. He even asked if some historical marker could be placed so that people do not forget the school’s contribution. “The revitalization of McCoy Hill will benefit the community by providing opportunities for healthier lifestyle — places where seniors can walk and children can play/exercise without fear,” JuanitaWilson said, “but we need your help to keep it clean and to report issues so that we can get them fixed. Each of us have a role to play for the success of McCoy Hill. We are talking to churches, community groups, and others to join us in their own way.”

Special thanks to the city police and fire departments who provided free hot dogs and hamburgers; Mount Olive Baptist Church which adjusted its Tuesday evening services to attend the meeting; Bell Vault Co. for the tents; and Sumter County Parks & Recreation for the chairs.