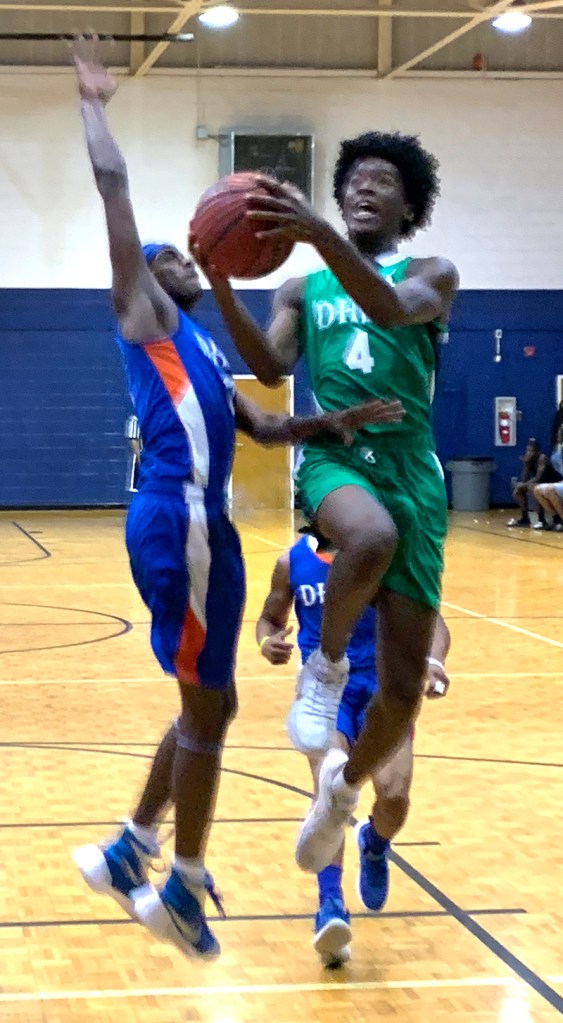 AMERICUS – The 11u Rockets withstood a second-half comeback by the Bucks to hold on and win 41-40 on Thursday, June 20, at the Ninth Grade Academy gymnasium. Rockets guard A.J. Kearse led the way by scoring 28 points. This was just some of the exciting action that took place during Week 3 of the Dwight Harris Boys Club Basketball League (DHBCBL).

“It was a pretty close game at the end. We’ve got to get better in pressure situations,” 11u Rockets head coach Lewis Mack said. “When teams press us, we have to do a better job of breaking the press.” Mack went on to remark that two of his best players, Tyran Smith and Brenden Covin, had fouled out of the game. That played a significant factor in the Bucks making their run. Covin scored seven points on the night for the Rockets. 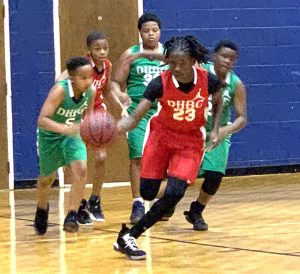 However, the Bucks would not go quietly. They went on a 9-4 run early in the second half to cut their deficit to 34-26 before Kearse scored again to increase the Rockets’ lead back up to 10. However, the Bucks went on a 14-5 run to close out the game and came within a basket of pulling off a come-from-behind victory. 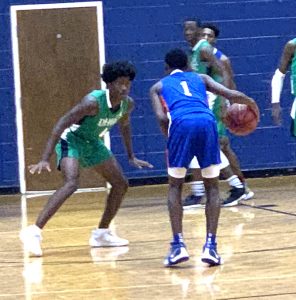 Americus-Sumter guard Wallace Bradley with the ball for the 17u Thunder. Bradley scored 32 points, including four three-pointers within a minute and a half.
Photo by Ken Gustafson

LeBron Brown led the 11u Bucks with 12 points and Austin Davis had eight. Tyler Rogers also chipped in seven points for the Bucks in the losing cause.

In the 8u Division, it was a close game early between the Warriors and the Bucks, but the Warriors took control in the second half and ended up winning by the score of 17-8. Chaston Green led the Warriors with seven points. Malik Paul and Ayden Arnett each had three and both Jordan Holloway and Ryan Peck each had two points. The 8u Bucks were led in scoring by Elijah Fuller with six points and Cranston Fulks scored two in the losing cause.

On Wednesday, June 19, the crowd at the Ninth Grade Academy gymnasium witnessed what was almost another late-game comeback by the 17u Thunder against the Bucks. Thunder guard Wallace Bradley, a starter on the Americus-Sumter High School team (ASHS), nailed four three-pointers in the span of 1:30. The fourth of those three-pointers came at the buzzer. However, it was not enough as the Bucks went on to win 74-71. Bradley led all scorers with 32 points. 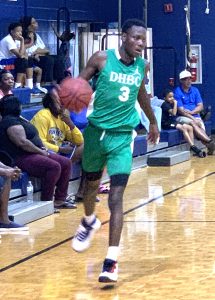 Americus-Sumter and 17u Bucks sharp shooter Trae Brown seen here with the ball. Brown scored 19 points in the win over the Thunder.
Photo by Ken Gustafson 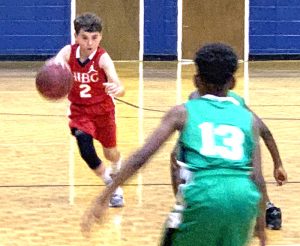 Jase Peterson handling the basketball for the 11u Rockets. Peterson scored two points in the 41-40 win over the Bucks.
Photo by Ken Gustafson

The Bucks went on a 7-2 run to begin the second half and boosted their lead to 46-32. They maintained a double-digit lead until Bradley hit one of his four three-pointers near the end of the game to cut the Thunder’s deficit to 72-65. 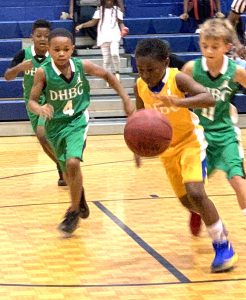 Aiden Williams pushes the ball up the court for the 8u Warriors.
Photo by Ken Gustafson

Bradley was fouled on that particular three-pointer, but missed the free throw. The Bucks had a chance to put the game away earlier, but Quevoluia Willoughby missed two slam- dunk attempts. Willoughby ended up in double-figures with 18 points and Brown had 19. For the Thunder, both Jakontist Gordon and Elijah Westbrook each chipped in 14 points in the losing cause. 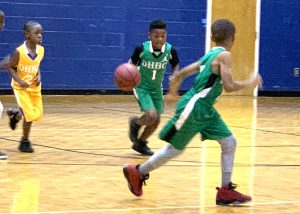 Kyle Robinson pushes the ball up the court for the 8u Bucks.
Photo by Ken Gustafson

In other action on Wednesday, the Stewart County Knights (SC) showed their mettle early and went on to a dominating 55-35 win over the 17u Raptors. SC had three players in double digits. Malik King led them in scoring with 14 points and Jamerion Beauford had 13. Neketta Ellington also chipped in 11 points in the win. Jaheem Banks led the Raptors in scoring with 15 points.