Americus Travelers salvage one of three games at state tournament 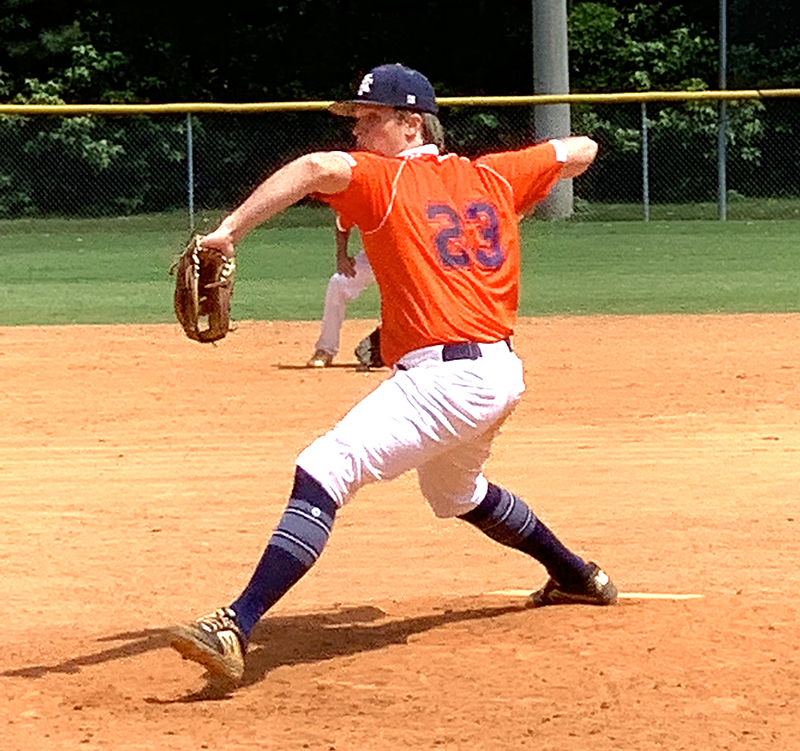 DACULA, GA – The Americus Travelers 14u travel baseball team struggled during the first two games of pool play on Saturday, June 22, but managed to salvage an 8-4 victory over the Charlie Culberson Blue Team (CCB) on Sunday, June 23, in the knock-out stage of the Training Legends Travel Team Georgia State Tournament. The tournament was played Saturday and Sunday, June 22-23, at Dacula Park in Dacula, GA on the northeast side of Atlanta.

“On Sunday, we played one of our most complete games of the season,” Americus Travelers head coach Tim Estes said. “Chase Ledger was in control from start to finish. Also, every player on the team had at least one hit.” 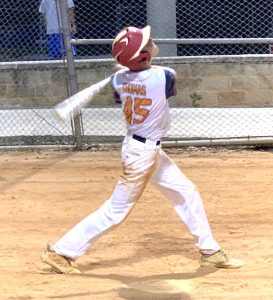 The Travelers jumped on the CCB team early in the first inning. With one out, Thomas Willis and Ledger both singled. After Jaxson Haire reached on an error to load the bases, Davis singled in Willis for the first run of the game. Jack Clark drove home courtesy runner Tripp Thomas for the Travelers’ second run when he hit into a fielder’s choice. An RBI single by Owen Lamb, which gave the Travelers a 3-0 lead, followed that.

Ledger got into some trouble early in the bottom of the first. However, with the bases loaded and two outs, he struck out Blane Wilson to end the threat. 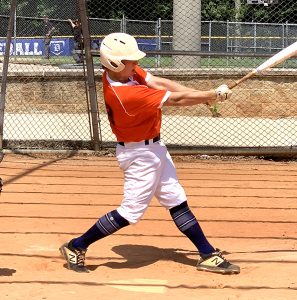 Chase Ledger went 2-for-4 with a single, an RBI double and scored a run in the Travelers’ 8-4 win over the Charlie Culberson blue team on Sunday, June 23.
Photo by Ken Gustafson

The Travelers added three more runs in the top of the fourth inning. Caden King and Peyton Tompkins both singled to put runners at first and second with no outs. Landon Knight then laid down a well-executed bunt single down the first-base line. After Tripp Thomas struck out, Willis hit into a fielder’s choice, scoring King from third to increase the Travelers’ lead to 4-0. Ledger drove in another run on a double to center field and Jaxson Haire then belted an RBI single to increase the lead to 6-0. It appeared that the Travelers were well on their way to securing a victory after two disappointing losses on Saturday.

However, CCB answered in the bottom of the fourth. With one out, Blane Wilson singled. After Jake Price hit into a fielder’s choice, Britt Baxter and Dylan Dobbs both singled. Dobbs was able to drive home CCB’s first run of the game. After Jake Slaughter singled to load the bases, C.J. Hawkins belted a triple to right field, scoring three runs and shrinking the Travelers’ lead to 6-4. 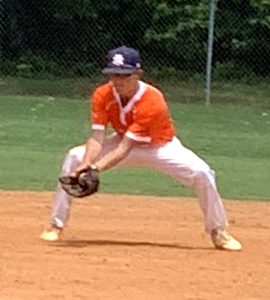 However, the Travelers got two insurance runs in the top of the fifth. Landon Knight led off with a single, followed by a walk to Tripp Thomas. Willis then reached on an infield single to load the bases for Ledger. Unfortunately, Ledger lined into a double play. However, Haire drew a walk to reload the bases for Davis. Davis responded by knocking in two runs on a single to left field. That would be enough insurance for Ledger, who was able to retire the next three batters in order to seal the victory.

The Travelers (14-7-1) were two wins a way from winning the tournament and were scheduled to play at 5 p.m. before the rains came, canceling the remainder of the tournament.

C.J. Hawkins and Blane Wilson each went 2-for-3 to lead the CCB offense. Hawkins drove in three RBIs on his three-run triple in the fourth. Jake Slaughter started on the mound for CCB. He pitched four innings and gave up six runs on 11 hits. He walked none and struck out one batter. Jake Price came on in relief of Slaughter. Price gave up two runs on four hits, walked two and struck out none. 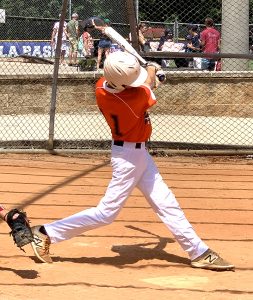 Second baseman Caden King singled and scored a run in the Travelrs’ 8-4 win over the Charlie Culberson blue team.
Photo by Ken Gustafson

While the Travelers were able to find their footing on Sunday, they struggled during their first two games of pool play on Saturday. In their first game of the tournament, they faced the same Charlie Culberson blue team (CCB) they would later beat. However, their first encounter with CCB didn’t go well at all. The game was tied 1-1 in the third until CCB’s Eli Barrow belted a two-run home run to give his team a 3-1 lead. It was the beginning of a nine-run barrage for CCB in the third and it led to a 10-1 loss for the Travelers.

It was a difficult game for the Travelers’ pitching staff as they walked a combined eight batters in this game. Starting pitcher Tripp Thomas pitched 2.1 innings and gave up four runs on four hits. Thomas struggled to find the strike zone, walking five batters while striking out four. Landon Knight came on in relief of Thomas. However, Knight struggled as well. He gave up six runs on three hits and walked three CCB batters while striking out one. Jack Clark was the third and final pitcher used for the Travelers. Clark gave up one hit in the ball game. 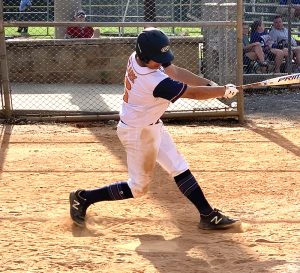 Jack Clark went 2-for-4 at the plate with two singles in the Travelers’ win on Sunday.
Photo by Ken Gustafson

Thomas, Ledger and Caden King each had multiple hits in this game for the Travelers. Ledger, who went 2-for-2, drove in the team’s only run of the game in the third inning.

The Travelers tried to bounce back in Game 2 and played much better. However, they fell 9-7 to the Charlie Culberson red team (CCR). Trailing 5-0 in the bottom of the second inning, the Travelers scored six runs on five hits to take a 6-5 lead. However, CCR responded with three runs in the top of the third to retake the lead. The Travelers were able to get to within one run when Peyton Tompkins drove in Jack Clark on a fielder’s choice in the bottom half of the inning, but it would not be enough as CCR shortstop Tyler Driggers homered in the fourth to give his team an insurance run. The Travelers had runners on first and second with one out in the bottom of the fourth, but CCR relief pitcher Hunter Watter struck out Jaxson Haire and got Dylan Davis to hit into a fielder’s choice to end the game.

The Travelers struggled defensively in this game, as they committed a total of six errors. CCR committed two errors. 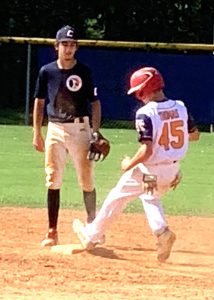 Tripp Thomas advances to second base standing up safely. Photo by Ken Gustafson

Thomas Willis led the Travelers’ offensive attack by going 2-for-3 at the plate with two singles and two RBIs. He also scored a run in the game. On the mound, Owen Lamb got the start for the Travelers, but pitched only 0.1 innings. Lamb gave up three runs on three walks. Two of those runs were earned. However, he was able to strike out one batter. Caden King came on in relief of Lamb. King pitched 3.2 innings and gave up six runs on seven hits. He walked two and struck out five.

Driggers led the CCR offense by going 2-for-3 at the plate. He drove in two RBIs on his two-run home run in the top of the fourth inning.

After Saturday night’s second loss, Estes addressed the team and told them that they could allow the two losses to define them, or they could resolve to play better and try to win three games in a row to win the tournament. In response to Estes’ challenge, the Travelers got off the mat and showed what they are capable of in Sunday’s 8-4 win over CCB. 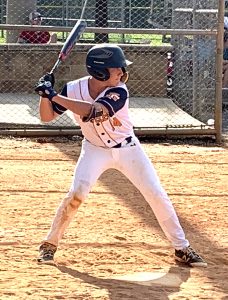 Dylan Davis went a combined 4-for-8 at the plate in three games and drove in three RBIs for the Travelers.
Photo by Ken Gustafson

With the state tournament behind them, the Travelers will now focus on getting ready to compete for a national championship at the 2019 Grand Slam World Series of Baseball Monday through Sunday, July 1-7, in Panama City Beach, FL.

Estes believes that the overall training that each player in the Americus Travelers program receives prepares them to compete at the national level. 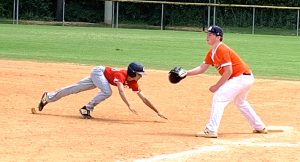 Americus Travelers first baseman Landon Knight is ready to tag out the runner as he scrambles back to first.
Photo by Ken Gustafson

“Unlike many programs we face, ours is about the development of every player,” Estes said. “Each player on our team has had 40 to 60-plus at bats on the summer and we’ve played everyone at least 60 innings in the field defensively. We’ve had 10 guys see time on the mound this summer. Four of them (Caden King, Jaxson Haire, Chase Ledger and Thomas Ray) have seen the most action, but we have four more who have seen action as well. I’m confident that we have prepared them for the national level of play we will see next week.”