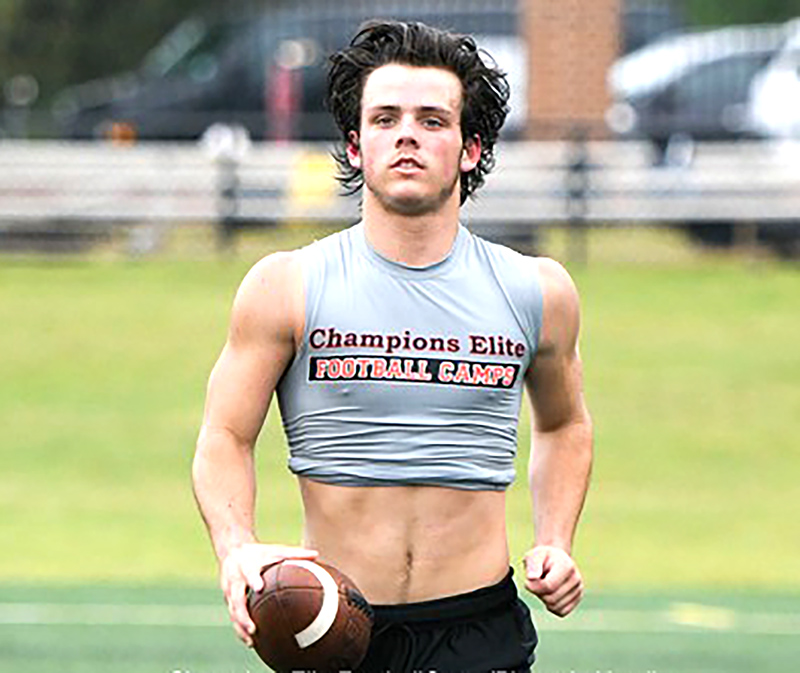 Southland Academy running back Clay Owens ran the fastest times of any of the 417 athletes in the 40-yard dash at the LaGrange College football camp. Submitted Photo

AMERICUS – One of Sumter County’s top high school football players is on the verge of breaking a few school records this coming fall. Southland Academy (SA) senior running back Clay Owens is poised and ready for a breakout, record-breaking senior season for the Raiders.

During his junior year in 2018, Owens helped lead SA to a 9-3 overall record. The Raiders advanced to the second round of the Georgia Independent School Association (GISA) Class AAA State Playoffs before losing to Heritage-Newnan 34-16.

Owens is right on the doorstep of breaking the SA all-time rushing record (3,983 yards) and the school’s record for all-purpose yards (4,778 yards). Dave Walls set both records back in 1992. With one more season to go, Owens has accumulated a total of 3,554 rushing yards and a total of 4,301 all-purpose yards.

With his success on the field, Owens has attracted the attention of several colleges and has been invited to their camps to showcase his speed and skills. At a camp at LaGrange College, Owens ran the 40-yard dash twice. In his first run, Owens ran a 4.40. He ran a 4.43 on his second run. There were 417 athletes at this camp and each of them ran the 40-yard-dash twice for a total of 834 different times. Out of the 834 times that were posted, Owens’ times ended up being the top two times out of all of them.

According to his father, Joel Owens, he ran a 4.41 in the 40-yard dash at a camp at Coastal Carolina University a week ago. “He’s getting a lot of attention from colleges,” Joel Owens said. “He’s been invited to a camp at North Greenville University in July. He’s going to Kennesaw State on Saturday, July 13, having been invited to their camp.” The elder Owens went on to say that they have been corresponding with 10-12 other colleges as well.

“SA head coach Rod Murray has been a tremendous influence on Clay,” Joel Owens said. “He and Clay are very close and Rod is doing everything he can to promote and help Clay. We just think the world of him.” Both Owens and his father are also very thankful for the work of John Harris, who is Owens’ personal trainer. “Harris, a former athlete at Americus High School, has worked with Clay on his time in the 40-yard dash,” Joel Owens said. “We have him working with Clay a couple of days a week. He’s made a big difference.” The elder Owens went on to say that one of the things colleges look at is an athlete’s time in the 40-yard dash, especially if the athlete is a running back or a wide receiver and Owens plays both positions.

Born in Cordele, Clay Owens started playing football when he was six years old. According to Owens, the desire to be great at football came when he was watching a game on television. “I was probably watching Alabama vs Auburn,” Owens said. The elder Owens recalled a moment when his son was just starting out playing football. “When Clay was six, the very first time he ever ran the ball in the Cordele recreation department was for a 45-yard touchdown,” Joel Owens said. “When he was in seventh grade at Crisp Academy, the first kickoff return he had ever taken in his life against Fullington Academy went for 99 yards. It was kicked over his head and he ran it back all the way for a touchdown. He’s always been an extremely good running back. He has extremely good vision to see what’s ahead of him.”

Both Owens and his father are extremely grateful to Southland Academy for how they have been able to help him be successful. “Southland is a fantastic school. It’s a good Christian school,” Joel Owens said. “The coaching staff, the facilities, the teachers and the administration, all the way up to Mr. Ty Kinslow, has been just absolutely phenomenal. We couldn’t ask for a better situation for Clay.”

While Southland Academy has meant the world to Owens, the feeling is mutual. It has been a joy for head coach Rod Murray to have Owens as a Raider. “Clay is an extremely hard worker. He comes into the weight room and gets his work done. He has represented Southland extremely well on and off the field and we are proud to have him as a Raider,” Murray said. “Clay has been blessed to play with some great teammates through his high school career and he credits his successes to the hard work and determination of his fellow players.”

Owens, along with the rest of the Raiders, will take the field to begin the 2019 season on August 30 at Southwest Georgia Academy in Damascus, GA. Kickoff is scheduled for 8 p.m. The Raiders’ first home game of the season will be on Friday, September 6, against Westfield. Kickoff for that game is scheduled for 7:30 p.m.