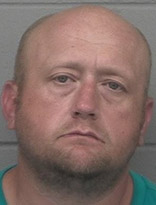 AMERICUS — An Oglethorpe man was arrested here Friday and remains in jail.

Sumter County Sheriff’s Chief Deputy, Col. Eric Bryant told the Times-Recorder that authorities were on the look-out for a black pickup truck that was seen in the area of storage units on Felder Street which had been burglarized. Deputies spotted the truck on Judy Lane Friday afternoon and paid a visit to 420 Judy Lane. There they interviewed a female “who was very cooperative,” according to Bryant, and led them to an RV parked in the back which had been stolen. Inside the residence, they found various articles, such as TVs and a computer, which were also reported stolen. Those items, along with the recreational vehicle, were seized, Bryant said.

They arrested Michael Gwyne Dunn, 40, of 3870 Ga. Highway 26 W., Oglethorpe, charging him with felony second-degree burglary. He was still housed in the Sumter County Jail as of Tuesday afternoon.

Bryant told the Times-Recorder that the investigation is ongoing and more charges may be pending.