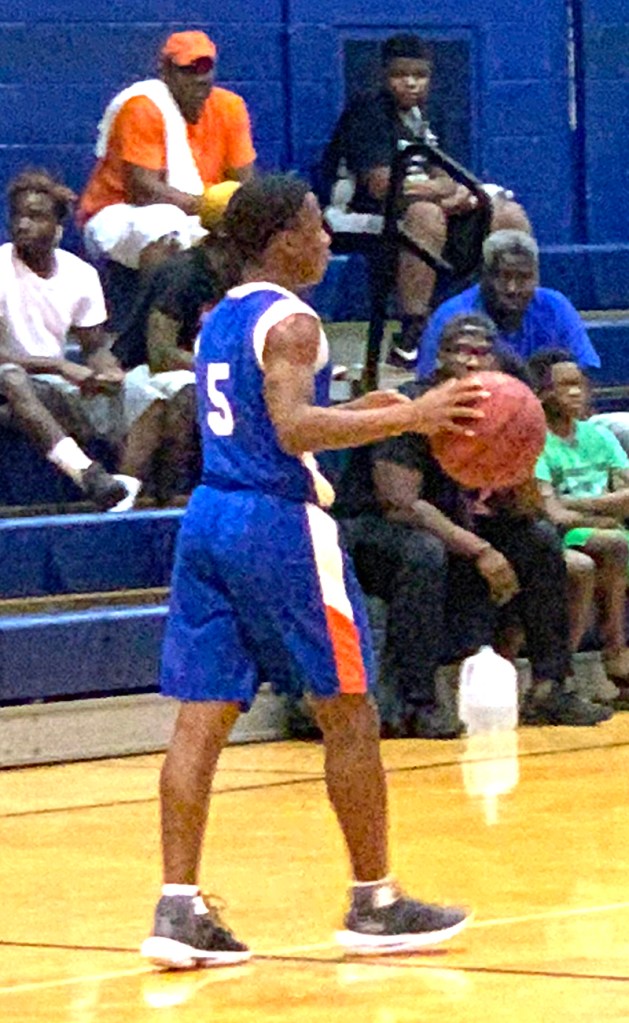 14u Thunder guard D.J. Hurley scored 31 points to lead his team to a 56-50 win over the 14u Rockets. The Thunder will take on the Raptors in the 14u championship game on Saturday, July 20, at 12 p.m. Photo by Ken Gustafson

AMERICUS – The finals of all of the divisions of the Dwight Harris Boys Club Basketball League (DHBCBL) are now set. On Thursday, July 18, the 17u Bucks defeated the 17u Thunder 62-55 in the semifinals of the 17u division at Americus-Sumter County Ninth Grade Academy.

Trae Brown led the Bucks with 20 points and Quevoluia Willoughby was also in double figures with 15. Kanova Willoughby and Nathan Duke chipped in 11 and 10 points respectively for the Bucks.

The Bucks jumped out to an early 12-5 lead, but the Thunder responded with an 8-5 run of their own to cut their deficit to 15-13. The rest of the first half was evenly played, but the Bucks went into halftime with a 26-21 lead. 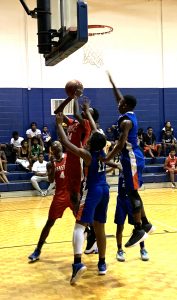 Jaquan Bowens of the 14u Rockets goes up for a rebound against the Thunder.
Photo by Ken Gustafson

However, the Bucks took control in the second half by going on a 9-2 run, capped off by a three-pointer from Vernon Lockhart. That run pretty much sealed the win for the Bucks. The Thunder couldn’t get the score below double digits until the last few seconds of the game. The Bucks were able to force the Thunder into committing turnovers and the Thunder struggled to score. Wiley scored a total of 19 points for the Thunder in the losing cause.

By virtue of their win, the Bucks will be in the championship game on Saturday, July 20, at 1 p.m. They will take on the winner of the other 17u semifinal game between the Rockets and the Raptors. 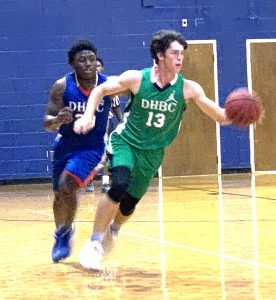 Guard Nathan Duke pushes the ball up the court for the 17u Bucks.
Photo by Ken Gustafson

The Raptors earned their way into the semifinals by virtue of their 56-44 win over the Knights of Stewart County High School (SC). Raptors guard and Schley County High School standout Deonte Cross led all scorers with 31 points and Lemario Larry chipped in 12.

The Knights led at halftime 27-22. During the first few minutes of the second half, both teams were evenly matched. However, with the score tied at 42-42, the Raptors scored 14 unanswered points. That effectively sealed the deal, as the Knights were unable to get back in the game. Malik King led SC with 16 points and Timothy Daniel scored 12. 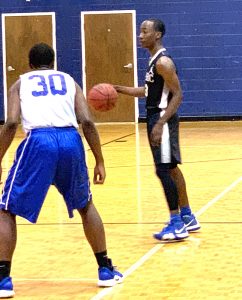 17u guard Jaheem Banks with the ball. Banks scored six points in the win over Stewart County.
Photo by Ken Gustafson

The finals of 14u division are now set. The 14u Thunder, led by high-scoring guard D.J. Hurley, defeated the 14u Rockets 56-50. Hurley poured in 31 points to lead all scorers. Hurley scored 21 of those 31 points off of seven three-pointers.

Hurley’s brother, Quay Hurley, scored 12 points and Mike Terry chipped in 11 for the Thunder in the winning cause. Anthony Tyson led the 14u Rockets with 20 points.

The Thunder will take on the 14u Raptors in the championship game of that division on Saturday, July 20, at 12 p.m. 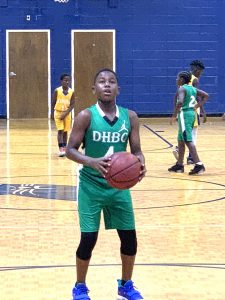 Austin Davis led the 11u Bucks with 15 points in their 35-27 win over the Warriors.
Photo by Ken Gustafson

On Wednesday, July 17, the 11u Bucks defeated the Warriors 35-27 to punch their ticket to the 11u championship game against the Thunder on Saturday, July 20, at 11 a.m. Austin Davis led the 11u Bucks with 15 points.

On Friday, July 19, there will be a three-point contest between the top three-point shooters from each division of the league. The contest will begin at 6 p.m. This will be followed by the 17u semifinal game between the Rockets and the Raptors at 7:30 p.m.

Being that there are only two teams in the 8u division, those two teams, the Warriors and the Bucks, will play on Friday, July 19, at 5 p.m.