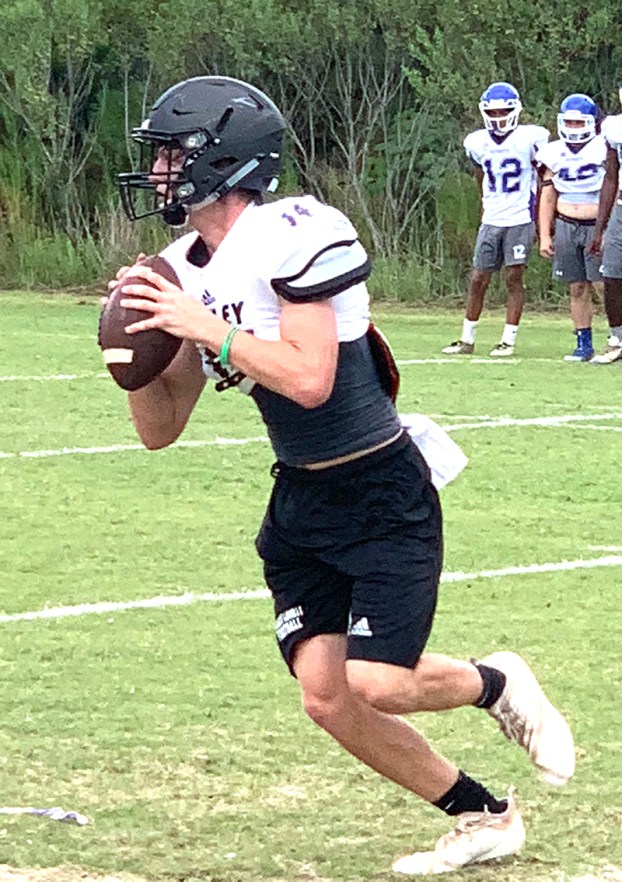 COCHRAN, GA – The Schley County (SC) Wildcat football team has been working all summer long to get in shape and to improve their skills in order to be ready for the 2019 season. Part of that training was participating in a two-day contact camp at Bleckley County High School (BCHS) Tuesday and Wednesday, July 23-24. The Middle Georgia chapter of the Fellowship of Christian Athletes (FCA) put on the camp.

In addition to Schley County and Bleckley County, the host school, teams from Putnam County, Lamar County, Morgan County, Turner County, Ware County, West Laurens, Wilcox County, Westside (Macon) and Howard attended the camp. All of the teams were there to practice against each other to sharpen their football skills for their upcoming season, but more importantly, they were there to here the life-changing message of the Gospel of Jesus Christ. That took place on Tuesday at 7 p.m. at the First Baptist Church of Cochran. 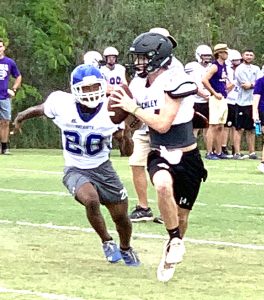 The camp began on Tuesday with the teams squaring off against each other in scrimmages on four practice fields at BCHS. The Wildcats’ first scrimmage was against Wilcox County. The rules of the scrimmages allowed players to ware pads and allowed them to hit and tackle above the waist, but not below. “You want to stay up. You don’t want to get on the ground so there is no tackling to the ground,” SC Offensive Coordinator Scott Burgess said. “It’s all about form tackling and staying up and running your feet. We’re playing three schools today (Tuesday). We play Wilcox County then Turner County then Bleckley County.”

Due to severe thunderstorms in the area, the scrimmage against Bleckley County was postponed until Wednesday.

This was an opportunity for the Wildcats to simply get better. Head Coach Darren Alford was extremely pleased with his team’s high energy and hard-nosed play in their first scrimmage against Wilcox County and told them that after the scrimmage. Some of the players were also pleased with how they themselves were performing, as well as the performances of their teammates. “It’s going pretty good. Everyone out here, we’re moving well. We’re looking good,” senior defensive end Zykevious Walker said. 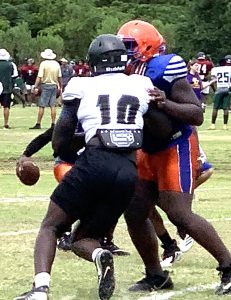 While the players were pleased with their progress and improvement, they all knew there were still some things that needed to be polished up. During the Wildcats’ first scrimmage against the Patriots, SC junior tight end Jacob Long realized that there were two things he needed to work on personally to become a better player for the Wildcats. “For me, I think that I need to get better footwork and learn to be more aggressive when I go and hit somebody,” Long said. “For the team, we’ve got to come out there ready to play and be more aggressive and set a tone.” Long went on to say that the team began their first scrimmage ready to go, but were showing signs of fatigue due to the heat and humidity. 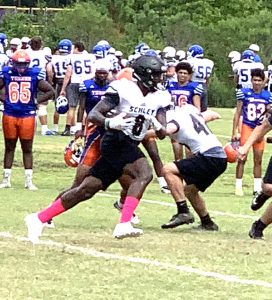 Senior outside linebacker/guard Brandon Collins had high praise for both the Wildcats’ defense and offense. “I think our defense, when we are all on the field and we are all playing together, nobody can run the ball on us,” Collins said. “Our offense, when we’re in a rhythm, aint nobody gonna stop us.”

For SC senior center Peyton Howell, this was a good time for him and his teammates on the offensive line to practice their communication with each other so that they will be able to execute plays on offense. “We’ve got a lot of people that know the play so we can echo it good and get the play,” Howell said. 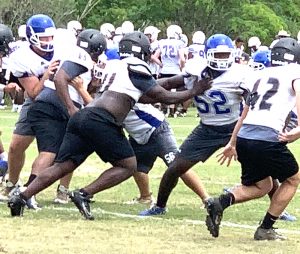 SC middle linebacker Zavian Solomon tries to get past the offensive line of Wilcox County.
Photo by Ken Gustafson

The Wildcats’ next scrimmage was against Turner County (TC). It was an intense and somewhat heated scrimmage. One of the TC defenders tackled senior running back Landon Dailey below the waist, which was not allowed according to camp rules. This upset Dailey and his teammates, but Coach Alford challenged his team to maintain proper character and to keep their composure.

Severe thunderstorms rolled into the area, postponing the Wildcats’ scrimmage with Bleckley County. Later that evening, all of the teams had dinner and participated in a worship service at the First Baptist Church of Cochran. They also got to hear a sermon from Middle Georgia FCA Director Matt Black. Black, a former college football player at The Citadel, spoke on the Old Testament story of David and Goliath and how each player can be a winner in life by accepting Christ as his personal savior. At the end of the sermon, an invitation was given for those who wanted to receive Christ. Those who made decisions for Christ met with counselors after the service was over. 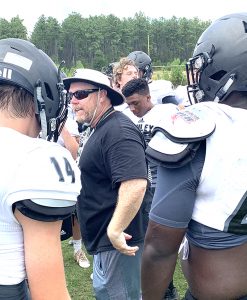 SC head coach Darren Alford speaks to his team after their scrimmage against Wilcox County.
Photo by Ken Gustafson

The team made the 30-minute drive to Dublin, GA and spent the night at West Laurens High School. Wednesday morning, they went back to BCHS for more scrimmages against Bleckley County, Lamar County and others.

Overall, Alford was pleased with his team’s effort and performance during the two-day camp, but he also believes that participating in this FCA camp has shown him and his team that there are still things that need to be ironed out.

“”We had a lot of good reps. We see where we need to improve on offense and defense,” he said. “Playing the larger schools showed us that we need to be in better shape since we have some two-way players. I felt good about some of the throws our QB made under pressure. Our defensive line has the potential to be dominant. I do feel like we accomplished what we came for and being in pads in the heat helps us be better prepared for the season.” 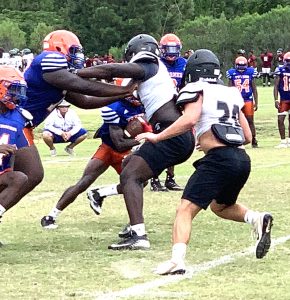 Zykevious Walker is engaged with a blocker during the scrimmage against Turner County.
Photo by Ken Gustafson

I was saddened to hear that a former offensive lineman for the New York Giants, Mitch Petrus, died of a... read more