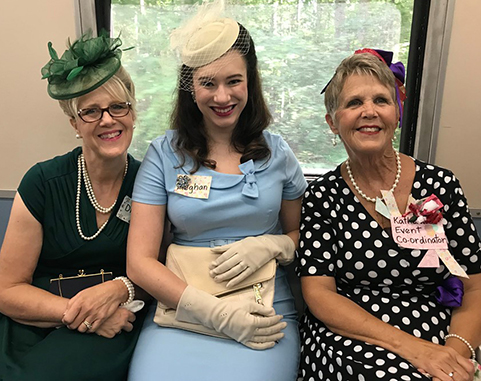 From left, ‘Dixie’ (Marle Usry), ‘Meghan’ (Meghan Usry), and ‘Katherine’ (Kim Fuller), three of the many characters of the murder mystery play.

AMERICUS — On Saturday, July 20, the historic SAM Shortline was the setting for a hilarious murder mystery play featuring a cast of locals and celebrity chef, Paula Deen. “Southern Ways and Means,” written by Kim Fuller, was delightfully clever and produced copious amounts of belly laughs all throughout the train. The play started as the train departed the station at Georgia Veterans State Park on Lake Blackshear, headed for Americus. Various characters roamed the train having arguments, spreading juicy gossip, and giving passengers insight into the characters. Passengers in the Americus and Hawkins cars received gift bags, snack mix, and two drink tickets to use at the bar. Snacks and drinks, including a few local wines, were also available for purchase in the Leslie car.

As the train pulled into the Americus depot, faces were pressed against the windows up and down the train. Eager fans and friends were hoping to catch a glimpse as former President Jimmy Carter boarded the train with his wife Rosalynn, Paula Deen, and another group of characters. Once everyone was aboard and the scene was set, the train rolled on toward Plains and the play continued. The cast wandered the train, conversing and interacting with passengers as they set the scene for the big finale.

As the crowd disembarked the train at its final destination, everyone made their way through the quiet streets of Plains to the community center. It was set for a party and with  tables lined with food, with the meal prepared by Ellen Harris, who followed Paula Deen’s recipes exactly. The meal that Paul Deen deemed “Fabulous!” was beer butt chicken, twice-baked potatoes, green beans, fresh tomatoes, and a roll. Ain’t Yo Mama’s Banana Pudding and apple pie cream cheese bars were just a few of the delicious desserts prepared by various people involved with the event. 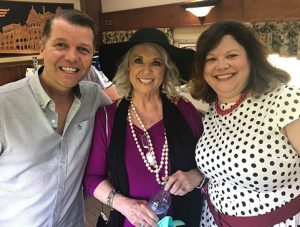 While guests were dining and conversing amongst themselves, a big scene began to play out between a few of the main actors. A love confession, petty insults, lies, and a beaded necklace distracted and delighted the crowd. Pauline, played by Paula Deen, began swooning and before the crowd knew it — she was murdered! Of course, no one ‘fessed up, so the crowd got to cast their vote for who they believed the murderer was. Local police were called to come take away the perpetrator who ended up being none other than Pauline’s husband Benefield, played by Lee Kinnamon, a conductor on the SAM Shortline.

This SAM Shortline murder mystery ride helped raise money for four causes: The Bag Lady Foundation, Friends of Jimmy Carter National Historic Site, Plains Better Hometown Program, and of course, the Historic SAM Shortline Railroad itself. Many people from all of these groups were involved in the play, whether it was behind the scenes on the train and at the community center, acting, or chatting with passengers, making sure they were enjoying themselves. Kim Fuller told the Americus Times-Recorder, “I am very proud of our ‘Southern Ways and Means’ cast. They never cease to amaze me! We raised money for good causes and had fun in the process! And I really wasn’t surprised when Benefield ‘did it’!”