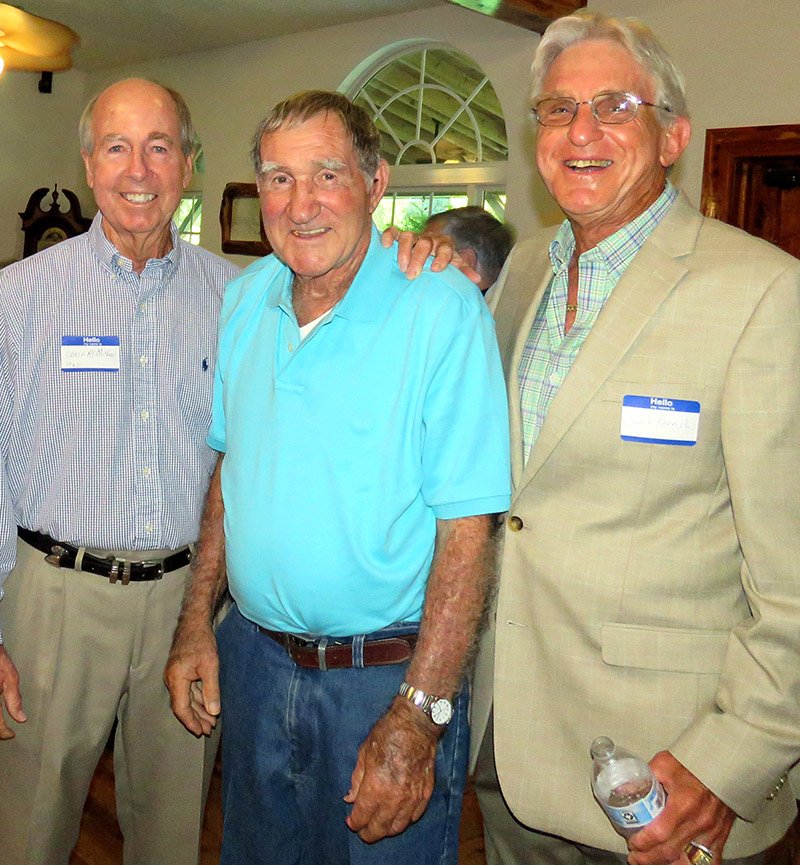 AMERICUS — Former Americus High School football coach Alton Shell died Thursday morning from complications of a stroke that he suffered a week ago. He was 86 years old.

Shell was the head football coach at Americus High (AHS) from 1971-1990. According to information gathered from the website www.ghsfha.org, during his tenure at AHS, Shell compiled an overall record of 169-66-1. He guided the Panthers to two state championships (1974-75) and nine region championships. Under his tutelage, 26 AHS players earned All-State honors.

Shell will be remembered for his success on the field as a coach, but to those who knew him and worked with him, he is remembered for much more than football. He had a tremendous impact on their lives.

Carl Willis, who serves as the special teams coach for the Americus-Sumter High School (ASHS) football team, began working for Shell in 1979, as a student-teacher and assistant football coach in 1980.

“He gave me my first job as a teacher and a coach,” Willis said. “He meant the world to me. I hope I can become half the coach and half the Christian man that Alton Shell was.”

Doug Parrish, who now serves as an assistant volunteer football coach at Southland Academy, was Shell’s defensive coordinator at AHS. “I was an assistant coach with him from 1971-1991. He was a rare individual to work for. He was a great man,” Parrish said. 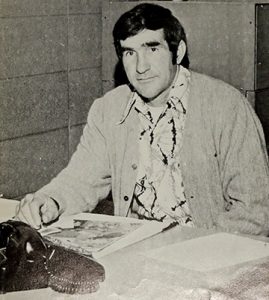 A photo of Coach Alton Shell from the 1976 Americus High School yearbook.

Before Shell came to Americus, Parrish served as the ”B Team” coach under the varsity head football coach Jimmy Hightower. “Coach Shell came and he said, ‘I’m going to need an offensive and defensive line coach and I want you to handle that on the varsity with me.’ I said ‘Coach, I’ll do whatever you want done.’ We got started out and it wasn’t far after a game or two that he said ‘No, we’re going to change. I’m going to put you at defensive coordinator. You’re going to run my defense,’ and that’s what I started doing for him,” Parrish said. “He let you coach … He and I would go out and eat at Burger King and sit and talk. We wasted so many napkins out there drawing Xs and Os and talking, but we would go over what we were going to do and he would let you coach. He was a great man to work for. He was easy-goin’ … ”

Parrish told the Times-Recorder it was a pleasure for him to have had the chance to work with Shell. “We had some good athletes and we had great success together. He and I, we won a lot of football games. He was a very successful man in coaching football.”

From 1973-76, Shell led the Panthers on a 33-game winning streak, the 12th longest in Georgia history, and to two state titles in 1974 and 1975. During the 1975 season, the Panthers were so dominant that they did not give up any points against any of the Georgia high school teams they played. The only team that was able to score against them was Dothan (Alabama). In that game, AHS ended up defeating the Tigers 14-8. The Panthers were able to shut out all of their other opponents, which were Georgia teams, on their way to their second straight state championship. That year, the Panthers finished undefeated at 14-0 and outscored their opponents 400-8.

The late AHS principal Richard Fussell hired Shell in 1971, after Hightower left to go to Cedartown. “That’s when I started coaching with him … in ‘71,” Parrish said. “That was his first job in Americus. Coach Shell always laughed and joked that when Richard Fussell offered him the job, he had to get an atlas and look up where Americus was. He didn’t even know where Americus was. He was an easy man to be around and enjoy … We traveled many miles together because we went to college spring games and spring practices and coaching clinics together. He and I rode those roads together. He liked to eat and then he would want to get over on the passenger side and take a nap. I would always cut up with him and tell him ‘We’ve got to drive a long distance before we get to the next place. You’re going to have to stay awake and talk to me.’ We went a lot of miles together. He and I were really close … He was a great person. He meant a lot to me and he did a lot for me.” During his 20-year tenure as the AHS head football coach, Shell guided the Panthers to 16 state playoff appearances and only had one losing season.

In addition to his two decades of coaching at AHS, Shell coached at four other high schools in Alabama. His first head-coaching job was a one-year stint at Handley High School in Roanoke, Ala., in 1963. Shell moved on and coached at Pell City High in Pell City, Ala., from 1964-1966. From Pell City, he moved on to Gaston High School in Gaston, Ala., where he coached from 1967-1968. His last stop in Alabama before he came to Americus was at Winterboro High School in Alpine, Ala. where he coached during the 1969 and 1970 seasons. During his two seasons at Winterboro, Shell guided the Bulldogs to two winning seasons, including a 10-1 mark and a berth in the state quarterfinals in 1970. 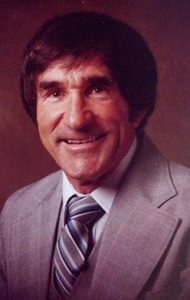 An image of Coach Alton Shell from the 1976 Americus High School yearbook.

After Shell left AHS in 1991, he returned to his alma mater, Georgiana High School (Alabama), in 1992, for his final season as a high school football coach. During that final season, he guided the Panthers to a 9-3 record and a win in the state playoffs. He retired after the 1992 season with an overall coaching record of 218-108-3.

Shell was born on March 1, 1933, in East Chapman, Ala., to Clive and Nita Pearl Bass Shell. He grew up with one other sibling: his brother Wayne, who lives in Auburn, Ala.

Shell began his athletic career at Georgiana High School. In 1950, Shell earned First Team All-State honors, as well as an appearance in the AHSAA All-Star Game. During his senior year at GHS, Shell caught a total of 20 touchdown passes.

Shell signed a scholarship to play football at Pearl River Community College in Mississippi. During his two years there, Shell excelled on the football field, scoring a total of 32 touchdowns for the Wildcats during the 1952 and 1953 seasons.

In 1953, Shell’s final year at Pearl River, he caught 27 passes for 423 yards and helped lead the Wildcats to a 9-0-1 record. At the time of his induction into the Pearl River Community College Sports Hall of Fame in 1990, Shell was third on the Pearl River all-time receiving list and was ranked second in school history for most receptions in a season. On two occasions, Shell scored four touchdowns in a game.

Also at the time of his induction, Shell owned the record for the Wildcats’ eighth longest punt return in school history, a 75-yard punt return against East Central College in 1953. In addition to playing football, Shell was also an outstanding baseball player at Pearl River. While playing for the Wildcats, Shell had a batting average of .436.

After two years at Pearl River, Shell continued his education and athletic career at Auburn University. While at Auburn, he played both football and baseball from 1954-56. As a football player, Shell was a member of the 1954 and 1955 teams that played in the Gator Bowl in Jacksonville, Fla. The 1955 Gator Bowl, in which Auburn fell to Vanderbilt 25-13, was the first-ever bowl game to be televised nationally.

During his senior season, Shell played a significant role in leading the Tigers to a memorable 14-12 win over Georgia Tech in 1955, when he scored Auburn’s first touchdown of the game. That win broke a 15-year losing streak against the Yellowjackets.

Even though he was somewhat small, the 5’9, 170-lb. running back was able to make a statement at Auburn. Shell rushed for a total of 315 yards on 63 carries for a 5.0 yards-per-carry average. He also had 61 receiving yards and scored four touchdowns in his career as a Tiger.

Shell excelled on the baseball diamond as well. While playing baseball for the Tigers, he earned First Team All-SEC honors as a centerfielder during his senior year in 1956.

After graduating from Auburn, Shell went into the Army for two years. After his military service, he played one summer of minor league baseball for Fort Walton Beach (Florida) in the Alabama-Florida D League. The team was part of the Washington Senators organization. Shell batted .288 and had a .936 fielding average, which was good enough for him to earn a spot on the league’s all-star team.

In 1959, Shell decided to retire from professional baseball after one season. The school bus travel, his “creeping age” and the “higher-level curve balls” were his main reasons for calling it quits.

Shell spent the next few years earning his teaching degree and a master’s degree from Auburn before starting his coaching career and raising a family. He married his wife Sally in 1966. The couple made stops in Pell City, Gaston, and Winterboro, Ala.,  before moving to Americus in 1971.

Since he retired from coaching in 1992, Shell had been extremely active in his church, First Baptist Church of Americus. In addition to being a great coach, Shell was also a master wood worker. He spent many hours building highly crafted wood projects for family, friends, and charitable projects. He was known for taking part in as many landscaping and home improvement projects as he possibly could.

According to Shell’s nephew, Dan Shell, the coach’s grandchild and great-grandchildren gave him great joy late in his life. He also tried to stay physically active, even until the very end. He made it a point to walk more than a mile a day.

“Anyone who met Alton Shell along those walks received a friendly greeting and good word,” Dan Shell said. “Alton Shell made his mark on this world helping others, leading thousands of young people and not just on the football field. Alton Shell’s spirit and good nature touched all those around him and he made all our worlds a better place.”