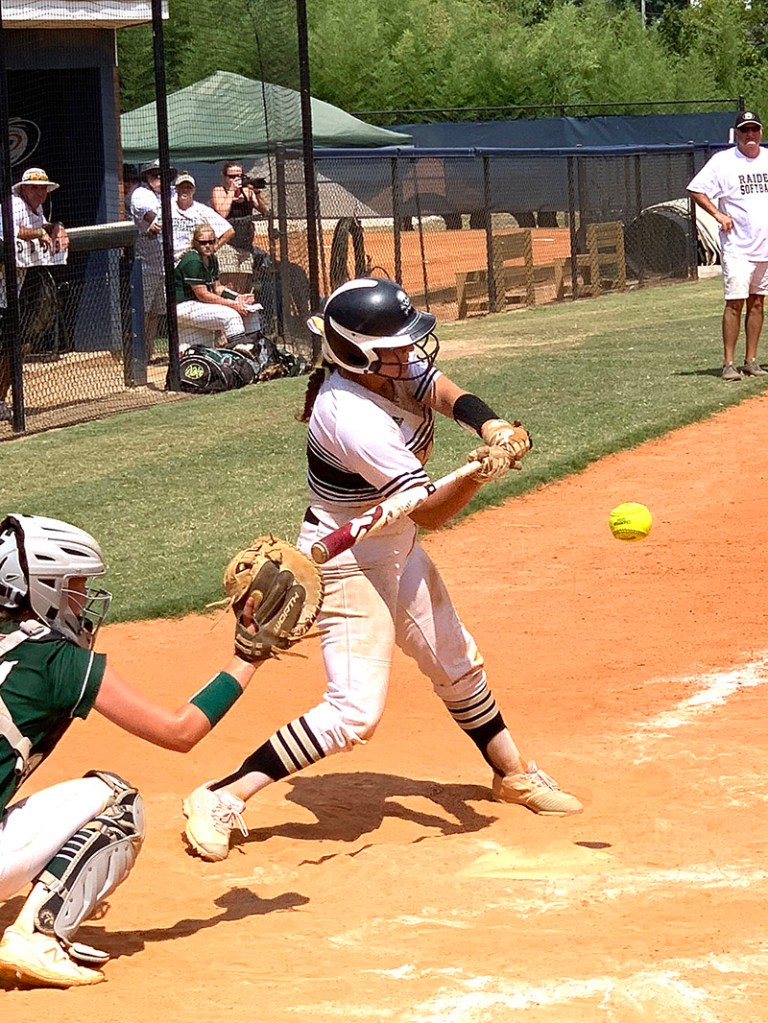 Southland Academy shortstop Holly McCain went 2-for-3 at the plate, scored two runs and drove in to RBIs in the Raiders’ 9-7 win over SGA. Photo by Ken Gustafson

AMERICUS – The Southland Academy (SA) softball team was able to earn a split in their two-game play day at Georgia Southwestern State University on Saturday, August 10. The Raiders defeated Southwest Georgia Academy (SGA) in a hard-fought contest by the score of 9-7, but got shut out by GISA state champions Westfield 15-0.

Despite the disappointing outcome in the second game, SA head coach Rusty Tondee was pleased with his team’s performance, particularly in the win over SGA.

“I thought we had a complete game in the first game,” Tondee said. “We hit the ball really well early. We made defensive plays early and we ran the bases really well early. You know, when you get a big lead, just like the Braves do, the other team fights and scratches back. That’s what happened, but we had the resilience to hold on and win.” 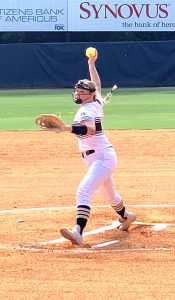 SGA took a 2-0 lead in the top of the first inning, but the Raiders responded with a four-run barrage in the bottom half of the inning. Alli Dent led off with a single and stole second base. After Morgan Minick struck out, Sara Beth Storey doubled to left field, advancing Dent to third. Brookland Weaver popped out for the second out, but Holly McCain knocked in a two-run single to tie the game at 2-2. Reese Roland then drew a walk, followed by an RBI single by Katie Rogers to give the Raiders the lead. Morgan Weaver then singled to right field, advancing Roland to third and Rogers to second. With the bases loaded and two outs, Abby Lightner reached on an error by the SGA third baseman. This allowed Roland to score to give the Raiders a 4-2 lead.

SA added three runs to their lead in the bottom of the second. With a man on first and one out, Brookland Weaver singled to right field and advanced to second on a throwing error. This allowed Minick to score from first and give the Raiders a 5-2 lead. After McCain drew a walk, Roland singled to left field, loading the bases for Rogers with one out. Rogers hit a sacrifice fly to left field, scoring Weaver to increase the lead to 6-2. After Morgan Weaver was hit by a pitch to load the bases again, Lightner reached on an error, allowing McCain to score from third. 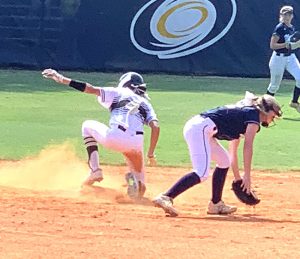 After SGA scored a run in the top of the third, the Raiders responded with another run in the bottom of the fourth inning to keep their five-run lead at 8-3. With a man on first and one out, Morgan Weaver drew a walk. This was followed by a bunt single by Lightner to load the bases for Dent. Dent was then hit by a pitch, allowing Roland to score from third.

Each team scored a run in the fifth inning and both offenses were held at bay in the sixth, setting the stage for a near comeback by the Warriors.

In the top of the seventh with one out, Kam Carver reached on an error. After Annalee Lockart flew out for the second out, Gillian Still singled to right field. Both Carver and Still advanced to third and second respectively on the play. 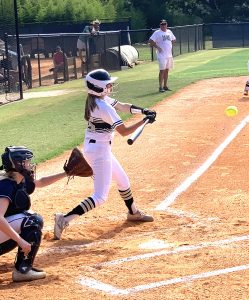 Southland Academy left fielder Brookland Weaver went 2-for-3 at the plate, scoring two runs and driving in another to help the Raiders defeat SGA 9-7.
Photo by Ken Gustafson

The Warriors had two runners in scoring position with two outs. Mary Mac Cooper then singled to center field, scoring Carver and bringing SGA to within four at 9-5.

Caroline Harper then reached on an error. This allowed two runs to score, cutting the Raiders’ lead to 9-7. Kate Hattaway then drew a walk, putting runners at first and second for the Warriors with two outs.

Fortunately for the Raiders, SA starting pitcher Rylan Youngdale was able to get Mimi Sasser to hit a pop up to the shortstop McCain for the final out of the game. 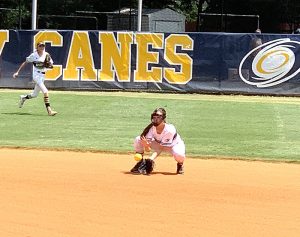 Youngdale had a very strong outing in the circle. Despite giving up seven runs on nine hits, she struck out seven batters and walked only two. Four of those seven runs were unearned.

Carver led the offensive attack for the Warriors. She went 3-for-4 at the plate and scored four runs.

Unfortunately for the Raiders, they were unable to keep the momentum going in their second game against the Hornets of Westfield (WS): the defending Georgia Independent School Association (GISA) Class AAA state champions.

The Hornets dominated from start to finish, shutting out the Raiders 15-0. SA had a difficult time trying to solve the pitching of WS starter Sydney Langdon. Langdon struck out five Raiders and gave up only two hits while walking one batter. 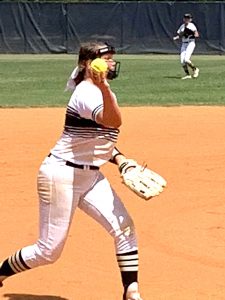 Youngdale throws to first for an out.
Photo by Ken Gustafson

Morgan Minick and Brookland Weaver were the only Raiders to earn hits in this game. Youngdale had a rough three innings against the Hornets. She gave up 10 runs on 11 hits, although six of those runs were unearned. Alli Dent came on in relief of Youngdale. Dent pitched one inning and allowed five runs on four hits.

The Raiders (2-4) will try to bounce back when they host Westwood on Thursday, August 15. First pitch is scheduled for 4 p.m.