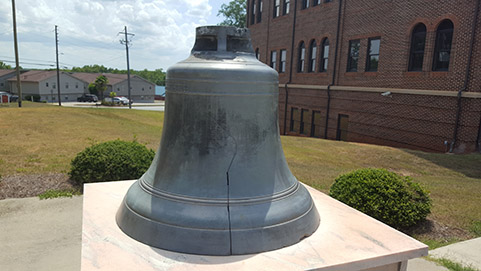 The bell reportedly donated by the Furlow Masonic Female College to the City of Americus in 1867.

You are forgiven if my question — or the term “sensory history” — sounds, well, silly. The social media gurus at the National Museum of American History thought so when they posted “The Smells of American History Project” on April Fool’s Day in 2017. The joke was on them. Their own curators had already hosted exhibits not only on the smells of the past but also the sounds, tastes, feelings, and sights. Major history journals had already published entire issues on sensory history. Decades earlier, Colonial Williamsburg began letting horses leave “road apples” in the street to make for a more “authentic” experience of colonial life.

Sensory history requires attention to detail. “Music” to one pair of ears is “noise” to another, and the distinction between the two says more about a listener’s tastes and prejudices than the resonance itself. One careful listener in early Americus was Charles W. Hancock, a printer from South Carolina who founded the Sumter Republican in 1854. Despite his newspaper’s name, Hancock expressed sympathy for the defunct Whig Party and admiration for the fleeting American (or “Know Nothing”) Party in the 1850s. When he published “A Short Outline of the History of Americus, Georgia,” 150 years ago in August 1869, Hancock drew on his own writings in the Sumter Republican as well as local lore about early white settlers. He was also an early sensory historian.

Hancock recounted what other white Americans in the 19th century described as the sounds of progress. For these listeners, the orderly and modern resonances of “civilization” steadily replaced the “howling wilderness” of Native American lands. Hancock first recalled the sounds a forest becoming a courthouse town. In those years, one could hear the “crack of the rifle, the sounds of the woodman’s axe, and the crash of falling timbers.” These sounds reigned for two decades, only to be replaced by those of a modernizing Americus.

The sounds of metal tools and, later, the steam engine, were the keynotes of the transformation from a courthouse town to a small city. The reverberations of progress included the “busy hum of industry” from “the shriek of the steam whistle, and the thundering foot fall of the iron horse,” to the “whirr of the spindle, the clanking of the loom, and the ring of the anvil and hammer of hundreds of mechanics.”

Above all else, the anticipation and arrival of the Southwestern Railroad in 1854 changed how Hancock listened to the city. He preserved these busy sounds of change and what he called “the spirit of the times” in his first issues of the Sumter Republican. “Contractors and operators are all astir,” Hancock wrote in February 1854. “The country is already enlivened by grading and excavations, and before many months will have [passed], the people will rejoice at the sound of the whistle and the rattling of the car.”

The sounds of the building boom grew louder as the year went on. “Houses are springing up, as it were, by magic,” Hancock wrote a month later, and “the sound of the saw, the hammer and the jack, and other instruments of industry, salute the ear on every side from morning till night.” These sounds of progress reached a crescendo in the fall. That September, Hancock wrote that “the mechanic is to be seen busily plying the instruments of his profession, and every breeze wafts to the ear the hum of industry and enterprise.” When the first steam-engine locomotives arrived in October 1854, Americus had not sounded like just a “courthouse town” for months.

Hancock hoped to write a complete history of Americus in 1869, but his writing revealed selective hearing. He admired, for instance, the performances of the city band. “The Americus Brass Band discourses its ‘brazen’ strains every Wednesday evening,” Hancock wrote, “to all ‘who have ears to hear’ and come within the sound of its ‘mellow horn.'” He omitted the recent sounds of a country at war with itself. During that conflict, Hancock had served in the Confederate army from April 1861 until the Confederate government allowed newspaper owners to return home in May 1862. As Hancock went home, he passed other southern men compelled to enlist and left poorer men forced to remain in the army for the duration of the war. Although far from the front, Hancock supported the Confederate war effort through his newspaper until the bitter end.

Hancock’s interpretation of the sounds of change as “modernization” and “progress” was also selective. Following his ears tells us how a white newspaperman heard the world around him. It does not tell us the only way people in the past heard our town. To many ears, those same sounds — from felling trees to putting up houses — were the cruel sounds of slavery. Moreover, Hancock’s history excluded the sights and sounds of African American men exercising their political rights for the first time at the Courthouse in 1868. Such omissions, obvious to careful readers 150 years later, underscore the individuality and subjectivity of listening.

Perhaps it is not surprising that Hancock would hear the world differently than an enslaved or recently freed person. After all, his life experiences as a powerful newspaperman were quite privileged. Yet at least one other omission is worthy of reflection. While Hancock was away in the Confederate army in early 1862, residents considered melting down all the bells of the city into cannons. “It is thought,” Hancock’s substitute as editor wrote, “that there is enough bell metal in Americus, to furnish tin for a Battery of six guns.” This was not uncommon. Many southern towns considered turning the loudest instruments of city into the loudest weapons of war. Yet Americus chose to keep its bells. In the decades that followed, local stories arose about hiding bells from an overreaching Confederate government strapped for metal.

While Hancock omitted bells in 1869, he had written about them several times earlier. The bell purchased originally for the Furlow Masonic Female College never went into that school, likely delayed because of the war years. It sat at the railroad depot for years, and was donated to the city in 1867. Hancock wrote, “Last Saturday, we heard its clear notes for the first time, and it made us feel glad indeed. This is a new epoch in the history of Americus, and will certainly be a great convenience to our citizens.” The bell would allow city residents to hear the correct time in the night without striking a light. It would also alert residents to fire. “Who says, ‘Americus is not a city,’ containing as it does, a population of over five thousand and a city clock. Hurrah for Americus, say we!”

Hancock regretted those words — at least in the short run. Only one week after the city bell went up, it fell out of rhythm and struck continuously all day and night. Hancock tersely suggested that the city hire someone “who understands the repairing of clocks,” and declared that the bell had “almost become a nuisance instead of a convenience for which it was intended.” The city repaired the clock; Hancock was never as complimentary of the bells again.

The ringing of bells became one of the many sounds of Americus in the late-19th century. The city installed two bells at the new Victorian-style courthouse. According to a local historical marker, “These two bells were part of courthouse clock systems which regulated all life within the sound of their tolling from 1867 to 1960, when the (third) courthouse was demolished.” Today, one bell is on display at Founders Memorial Cemetery on Forsyth Street. A second, older bell is on display at the Sumter County Courthouse. From its appearance, the older bell has been intentionally cracked to resemble the Liberty Bell.

Is this the bell that Hancock first admired, then loathed, and finally forgot about? Like many pieces of local history, the details are fuzzy and often contradict stories written in stone and brass. Although a historical marker indicates that the bell at the courthouse is the original, the Americus Times-Recorder tells a different story. According the newspaper records, the Americus City Council sold the original clock to the city of Blue Ridge in 1900. Four years later, Americus acquired another old bell, also purported to be the original one, from a farmer in the county. Although the provenance is questionable, what is certain is that the ringing of bells, like the sounds of “civilization,” was important to people like Hancock who listened to early Americus.