BUENA VISTA – The Schley County Wildcats opened the 2019 regular season at Marion County (MC) on Friday, August 23. They were hoping to avenge last year’s 34-27 loss to the Eagles in the GHSA Class A-Public State Playoffs. Unfortunately for the Wildcats, the Eagles prevailed 14-0 in a defensive struggle.

MC wide receiver Brandon Thomas opened the scoring in the first quarter when he caught a pass from quarterback Trice McCannon and ran the ball 66 yards for a touchdown. The extra point was good, and MC led 7-0. 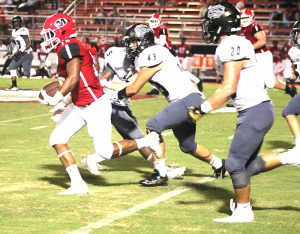 The Wildcats struggled to score against the stout defense of the Eagles. Quarterback Garrett Peavy was 6-for-15 for 74 yards and threw two interceptions. SC running back Trent Bivins rushed for 52 yards on 19 carries to lead the Wildcats’ running attack. Running back Zamon Ross ran the ball five times for 45 yards, and Landon Dailey had seven carries for 44 yards. In total, the Wildcats ran the ball for 160 yards on 39 carries. As a tight end, Zykevious Walker had one big 48-yard reception, but that was the longest passing play of the game for the Wildcats.

Bivins had three receptions for 10 yards and Ross caught the ball once for an 11-yard gain.

The Eagles sealed the deal in the fourth quarter when McCannon scored from four yards out. The extra point was good, and MC went on to hand the Wildcats a 14-0 loss to start the season. 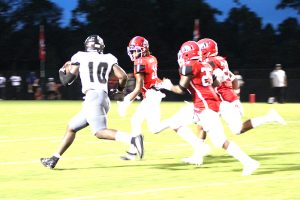 In spite of the difficulty the Wildcats had on offense, the defense played extremely well in this game. Walker showed why he is one of the top defensive ends in the country and why he is being recruited by several major college programs. In his first game as a senior, he tallied five solo tackles and assisted on three others for a total of eight tackles in the ball game. He also tallied .5 sacks. On the defensive side of the ball, Zamon Ross had one 20-yard interception on the night.

The Wildcats will try to bounce back with a win when they host the Cougars of Calhoun County on Friday, August 30. Both teams will be hungry for victory, being that the Cougars fell to Westover 35-0 in their season opener on Thursday, August 15. Kickoff from Ellaville is scheduled for 7:30 p.m.

Panthers’ inability to score in the red zone proves…