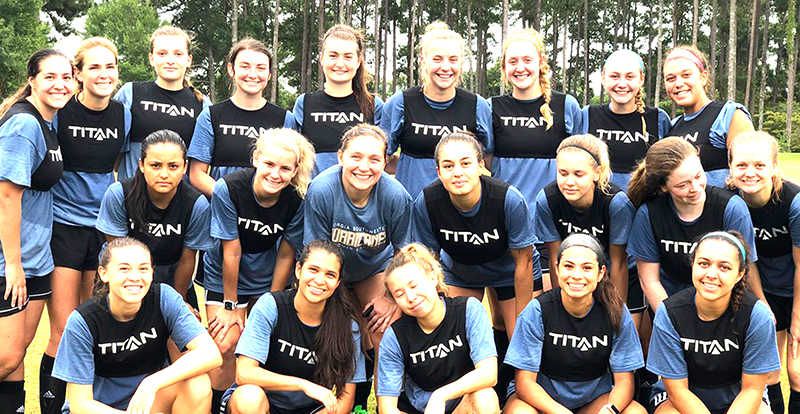 The GSW Women’s Soccer Team is experimenting with an electronic device called Titan that measures and analyzes how each player is performing throughout the week from practice habits to quality of sleep, among other things. It is hoped that by using this device, head coach Enrique Rodriguez can gain better insight as to how to improve his team’s overall performance on the field. Photo by GSW

AMERICUS – During the preseason, the Georgia Southwestern State University women’s soccer team picked up new hi-tech gadgets to play with in hopes of enhancing both their practice sessions and game play while on the field. The Titan Sensor is composed of real time data that uses GPS to track each player while they are active on the field through a small device that is placed inside a pocket on the back of a compression crop top that the players wear underneath their uniforms.

While this device is on, it transmits real-time athletic performance data that GSW head coach Enrique Rodriguez can view on the Titan app.

“I feel that by using Titan, we are jumping barriers,” Rodriguez said. “It’s helping us utilize facts to be more engaging with our players.”

Through the app, the players are able to input certain things, such as fatigue and muscle soreness, along with scales ranging from sleep duration, sleep quality and stress. Coach Rodriguez uses that information to measure and analyze how each player is doing throughout the week. The data helps with planning practices and time on the field for certain players.

“It (Titan) really helps you understand and process that every player is different,” Rodriguez said. “It helps me make a decision on who fits better in different roles.”

By using Titan, it helps put GPS in context with built-in synchronization and high-definition videos. A coach can then break down film and show athletes how specific situations are affecting their performance. As a result, both coaches and athletes can make the most of their film studies by viewing it side-by-side with the collected data.

The Lady Hurricanes plan to continue using Titan throughout the season as they see many benefits stemming from the data that’s collected. They will commence the 2019 season when they host Brewton-Parker College on Thursday, September 5. Kickoff is scheduled for 5:30 p.m.