Panthers knock off Dougherty to earn first win of the season 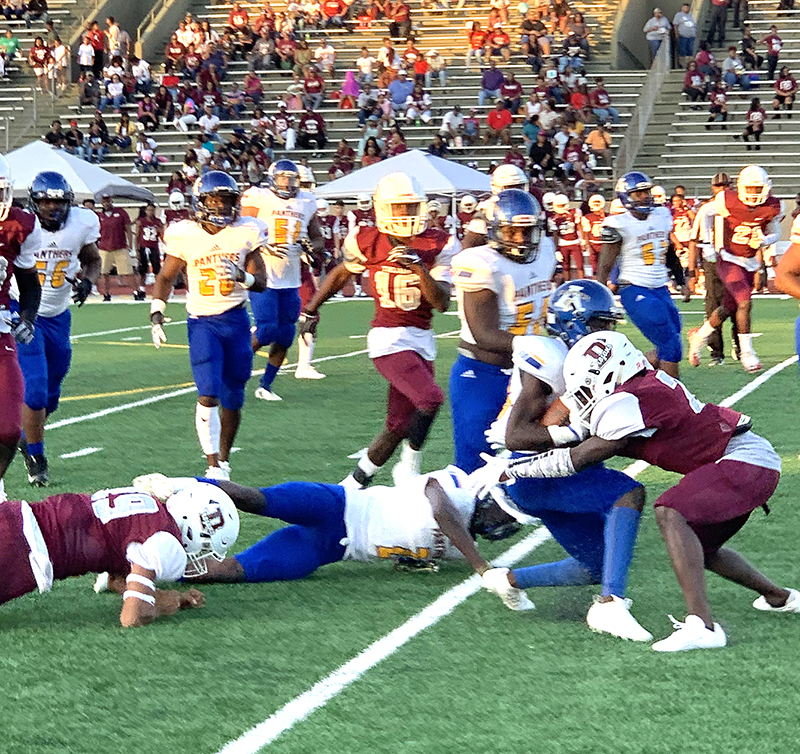 ALBANY – It was a defensive struggle during the first half, but in the second half, the Americus-Sumter football team (ASHS) used a steady running game and a solid performance by their defense to earn a hard-fought 26-12 victory over the Dougherty Trojans (DHS) on Friday, August 30, at Hugh Mills Stadium in Albany.

Throughout the first quarter, neither team could move the football very far, as the defenses of both teams were able to neutralize each other’s offensive attack, thus resulting in a scoreless first quarter. 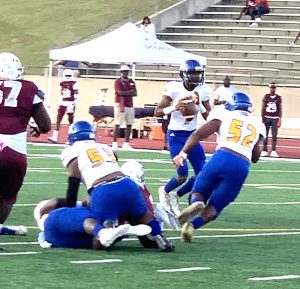 However, early in the second quarter, the Trojans were able to move the ball down inside the ASHS eight-yard line. On second and goal from the eight, DHS quarterback Bakari Bryant threw a short touchdown pass to Jimmy Jones to give the Trojans a 6-0 lead.

The Panthers responded by moving the ball down to the DHS 27-yard line. However, an illegal procedure penalty pushed the Panthers back to the DHS 32. On second down and 10, ASHS running back Keyvontay Nelson ran the ball down inside the Trojans’ 15-yard line. A couple of plays later, running back Dykameron Lamons scored from seven yards out. The two-point conversion attempt was no good, but the Panthers had tied the game at 6-6.

The Trojans responded by moving the ball down to the ASHS 28-yard line. On third and nine from the 28, the Panthers created a turnover by forcing and recovering a fumble, giving the offense 2:59 to take the lead before halftime. However, the ASHS offense was unable to mount a drive and had to punt the ball away with 2:05 remaining in the half. However, the Panther defense responded once again by stopping the Trojans on offense and allowing themselves to get the ball back with 40 seconds left. ASHS was able to move the ball down to the DHS 39-yard line, but with four seconds left, quarterback Kanova Willoughby held on to the ball too long and was tackled to end the first half. 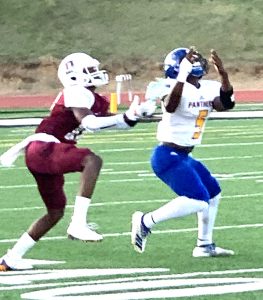 Americus-Sumter defensive back Lemario Larry tries to intercept a pass while defending a DHS wide receiver. Larry nearly came down with the interception on the play. Larry had two interceptions on the night.
Photo by Ken Gustafson

The early parts of the second half were much like the first, as neither team could move the ball due to penalties and strong defensive play. However, the Trojans struck again when Bryant threw a long 53-yard touchdown pass to Keimaurie Stubbs. The extra point attempt was no good, but DHS had taken a 12-6 lead.

However, With 11 minutes left in the game, Willoughby was able to move ASHS down inside the DHS 20-yard line on a quarterback keeper. Then on second down and eight from the DHS 16, running back Christian Waymon broke several tackles and scored a rushing touchdown to tie the game. The extra point was good and the Panthers were hanging on to a 13-12 lead. 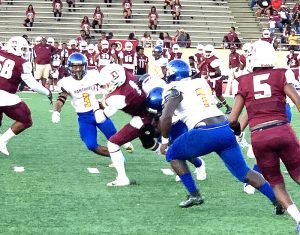 Tytravion Benn, A.J. Stokes and another Panther on the tackle of Dogherty wide receiver Sergio White.
Photo by Ken Gustafson

The Trojans responded by moving the ball deep into ASHS territory, but Bryant’s pass was intercepted by defensive back Lemario Larry. This gave some energy to the ASHS offense, as they responded by moving the ball down to the DHS 29-yard line and eventually pushed their way inside the DHS 10. They were able to run precious time off the clock in the process. Then Lamons scored his second rushing touchdown of the night. The two-point attempt was unsuccessful, but the Panthers had a 19-12 lead with a little over two minutes left in the game.

The Trojans tried to mount a comeback, but Bryant’s long pass towards the end zone was intercepted by Larry. Larry then made a backward lateral pass to Trevian Thomas, who ran the ball all the way to the end zone for a Panther touchdown. The extra point attempt was good, and the Panthers walked out of Hugh Mills Stadium with a 26-12 Region 1-AAAA victory. 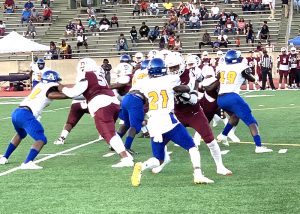 Americus-Sumter defensive back Christopher Young is engaged with a DHS offensive lineman.
Photo by Ken Gustafson

ASHS will now focus on trying to topple one of the best teams in the state of Georgia: the Trojans of Lee County. Kickoff from Leesburg is scheduled for Friday, September 13, at 7:30 p.m.

Ken’s Column: No one has the right to criticize…