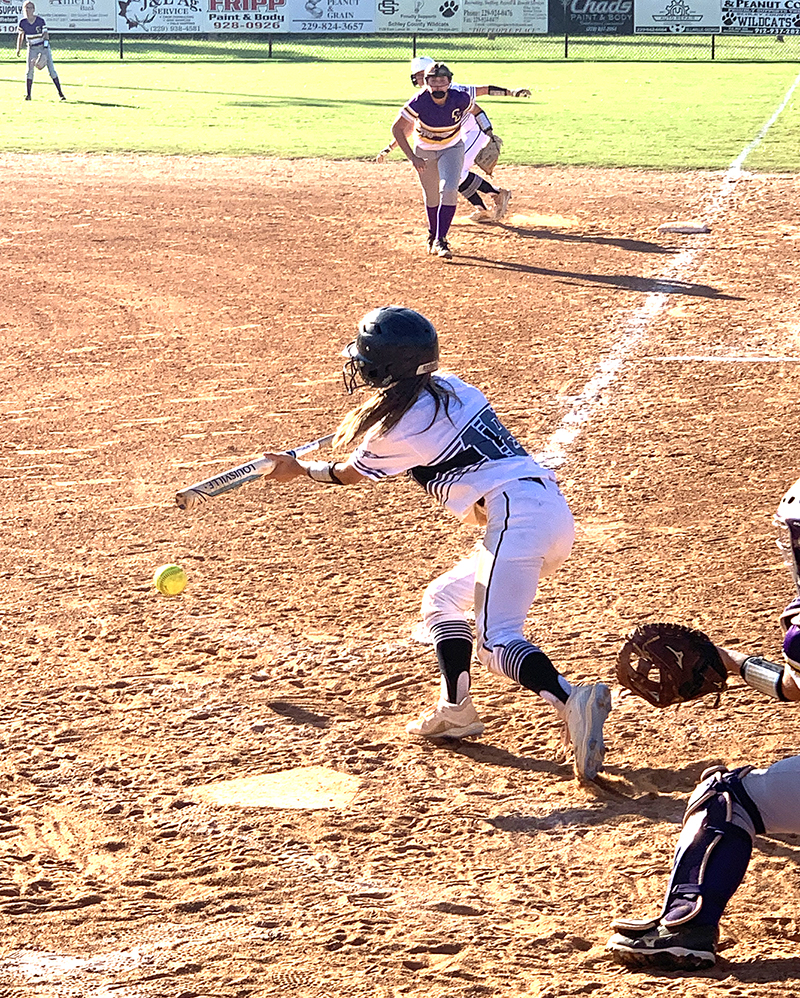 Schley County center fielder Alexis Bradshaw attempts to lay down a bunt during the Lady Wildcats’ game against Crawford County. Bradshaw went 1-for-3 in that game with a run scored. Photo by Ken Gustafson

ELLAVILLE – It turned out to be exactly what Schley County (SC) head softball coach Jody Sellars had feared. The Lady Eagles of Crawford County (CC) were going to trip his club up, as well as other teams in Region 4-A. The Lady Eagles scored three runs in the third and two in the sixth en route to a 7-2 victory over the Lady Wildcats on Tuesday, September 3, at Schley County High School.

The loss brings to an end the Lady Wildcats’ 10-game winning streak.

“I’m not surprised at all,” Sellars said. “My post-game speech to the girls just then was ‘I told you so’ because at the beginning of the year, I told them that Crawford was going to slip up and get somebody. They’ve been on the rise for the last couple of years. They’ve been scrappy. Hats off to them. They did what they needed to do to win the ball game. I told our girls at the beginning of the year that they (CC) were going to slip up and get us, Hawkinsville or Marion. They’ve already gotten Hawkinsville once. Now they’ve gotten us once. They’re a quality team. Their coaches have done a great job. They’ve got them headed in the right direction.” 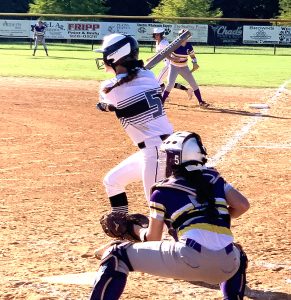 Schley County first baseman Berkley Goodin went 1-for-3 at the plate in the Lady Wildcats’ loss to Crawford County.
Photo by Ken Gustafson

Each team scored a run in the first inning, but the Lady Wildcats were able to grab the lead in the bottom of the second. Alexis Bradshaw led off the frame with a bunt single and stole second base. After Tamia Kelley struck out, her sister, Nyiah Kelley, executed a bunt single, advancing Bradshaw to third. After Kelley stole second to put runners at second and third with one out, Saige Whaley struck out swinging for the second out. Whaley’s sister, Landry Whaley, drew a walk to load the bases. Then Berkely Goodin reached on an error, allowing Bradshaw to score the go-ahead run. Hannah Crawford grounded out to end the inning, but the Lady Wildcats had taken a 2-1 lead. However, Bradshaw’s run would be the last run SC would score in the game. 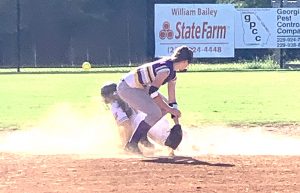 Alexis Bradshaw steals second base and slides in safely.
Photo by Ken Gustafson

“At the end of the day, we didn’t execute,” Sellars said. “The one inning that we had where we scored some runs, we actually got some bunts down, manufactured and did the things we’re supposed to. We didn’t for the rest of the game.”

CC starting pitcher Riley Scaggs gave up two runs on five hits in seven innings of work. She walked five and struck out five SC batters. Both Scaggs and CC third baseman Kryssi Maddox went 2-for-4 at the plate and scored a run. Maddox also had one RBI in the game. With the win, the Lady Eagles improve to 8-5 on the season. 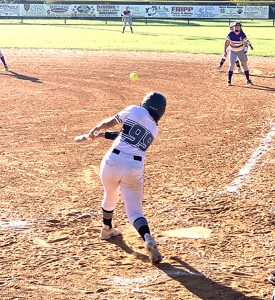 Schley County left fielder Nyiah Kelley went 1-for-4 with an RBI in the Lady Wildcats’ 7-2 loss to Crawford County.
Photo by Ken Gustafson

As for the Lady Wildcats, Bradshaw and Goodin led them offensively. Each went 1-for-3 at the plate, with Bradshaw scoring a run. Nyiah Kelley, Hannah Crawford and Rene Rix each tallied a hit in the game.

SC starting pitcher Saige Whaley took the loss. Whaley gave up seven runs on seven hits. Two of those runs were unearned. She struck out three batters and walked two.

The Lady Wildcats (10-2) will have no time to think about what might have been. They host the Lady Cougars of Crisp County (6-2) on Wednesday, September 4. First pitch is scheduled for 5:55 p.m.

Windsor Academy’s Ussery throws a shutout against the Lady…