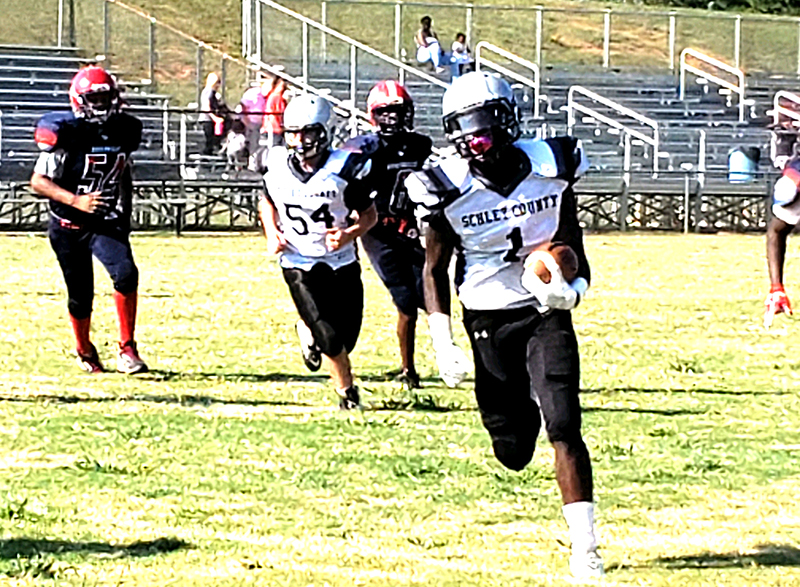 GREENVILLE, GA – The Schley County Middle School football team (SCMS) wasted no time in taking control of the game early and dominating their way throughout on their way to a 42-0 shellacking of Greenville Middle School (GMS) on Wednesday, September 4, at Greenville High School.

The Wildcats spent most of the game on the GMS end of the field. They were able to hold the Patriots to just two first downs the entire game.

The Patriots got the ball first to start the game, but the Wildcat defense was able to force a three-and-out to get the ball for the offense. On their first possession, SCMS got the ball on the GMS 26-yard line. On first and 10 from the 26, the Wildcats ran a toss sweep with running back Jalewis Solomon running 26 yards for the first touchdown of the game. The two-point conversion attempt failed, but the Wildcats had taken a 6-0 lead.

The SCMS defense made some big plays on the Patriots’ next possession. Trenton Stubbs was able to break through the GMS offensive line and record two sacks. The Patriots were forced to punt once again and the Wildcats got the ball on the GMS 15-yard line.

The Patriots were able to get a long kickoff return and got an additional five yards due to a facemask penalty on SCMS. However, the Wildcats forced a turnover when Ethan Sellars recovered a fumble.

However, the Wildcats returned the favor when they fumbled on the 32-yard line and the Patriots recovered the ball. 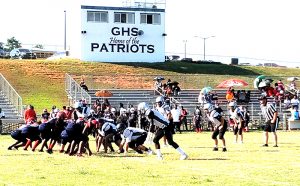 The SCMS offense is in GMS territory ready to score another touchdown.
Photo by Jack Clark

GMS was not able to capitalize on the SCMS turnover and the Wildcats took over on the their own 28-yard line. Solomon scored his second touchdown of the game by running 72 yards for the score. The two-point conversion attempt was no good, but SCMS had increased its lead to 20-0 with 1:55 left in the half.

The Wildcats forced another turnover when Solomon recovered a fumble and scored his third touchdown to give SCMS a 26-0 lead. Quarterback Jay Kanazawa then scored the two-point conversion on a quarterback keeper to increase the Wildcats’ lead to 28-0.

With 26 seconds left before halftime, the Wildcats added to their lead when Walker scored his second touchdown of the game. The two-point conversion was good, as Kanazawa threw a short pass to Jack Clark, increasing the lead to 36-0 by halftime.

The Wildcats scored one more touchdown before the game ended. With 5:30 left in the third quarter, Solomon ran the ball 28 yards for his fourth touchdown of the game. The two-point conversion attempt was no good, but the Wildcats left Greenville with a 42-0 win.