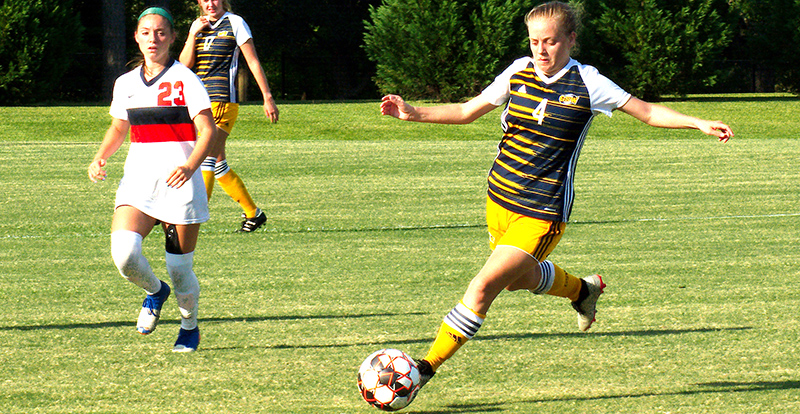 GSW senior midfielder Michelle Gustavsen is seen here with the ball against Brewton-Parker College. A native of Hiram, GA, Gustavsen scored one goal and tallied one assist during her junior year. A Nursing major, Gustavsen was a member of the Peach Belt Conference (PBC) All-Academic Team. Photo by GSW

The Lady Knights scored three goals in the first half en route to the victory. The first two goals were scored by Miagh Downey, followed by an own goal by the Lady Hurricanes.

The Lady Knights added to their lead in the 36th minute of the second half when Anna Heronymus scored. However, the Lady Hurricanes quickly answered when Alison Rugel scored her first goal of the year in the 31st minute as Geraldine Alvarez was credited with the assist.

However, Vivien Grosser added an insurance goal for MGA in the 21st minute to secure the victory for the Lady Knights. GSW got a late goal from Lizbeth Cervantes with five minutes left in the match, but it was too little, too late as MGA went on to win 5-2.

The Lady Hurricanes will try to get back in the win column when they host Spring Hill College on Saturday evening, September 14. Kickoff is scheduled for 7 p.m.