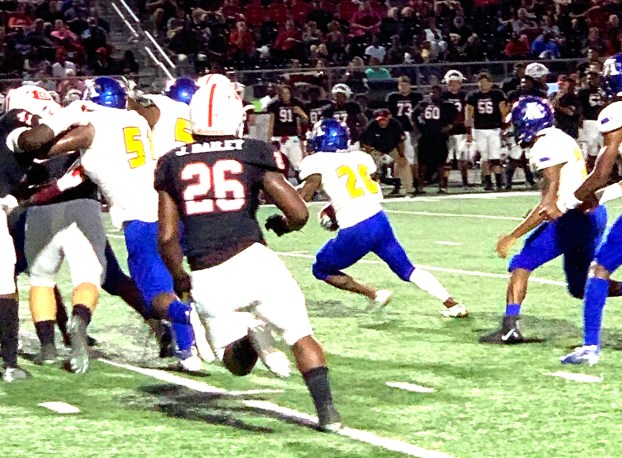 Friday the 13th very unlucky for the Panthers against Lee County

LEESBURG, GA – After their 26-12 win over Dougherty back on Friday, August 30, the Americus-Sumter High School football team (ASH) had the following week off. This gave ASH head coach Ross Couch and his staff an extra week to prepare a game plan to topple the defending back-to-back GHSA Class AAAAAA State Champions: the Lee County Trojans (LC). However, the Panthers were unable to stop the high-powered offense of the Trojans and were unable to score touchdowns in spite of being able to move the ball down inside the LC 10-yard at least twice. As a result, the Panthers went down to defeat 49-6 on Friday, September 13, at Lee County High School.

LC won the toss and elected to receive. On the Trojans’ first possession, they used mostly their running game to march all the way down inside the ASH 10-yard. Then running back Preston Simmons scored on a short rushing touchdown. The extra point was good and the Trojans had a 7-0 lead. 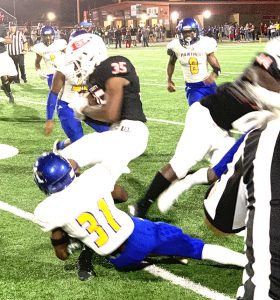 ASH defensive back Breylon Green (31) is in on a tackle of LC wide receiver James Hopson II.
Photo by Ken Gustafson

LC added to its lead when they once again moved the ball deep into ASH territory. LC quarterback Kyle Toole found Chauncey Magwood for a short touchdown reception. The extra point attempt was good and the Panthers found themselves trailing 14-0.

However, ASH was able to move the football twice down inside the LC 10-yard line during the first half. Unfortunately on both occasions, they had to settle for two field goals by Alexis Vasquez.

The Trojans scored their third touchdown of the half on a 95-yard punt return by Caleb McDowell. LC added another touchdown before halftime as Toole found Magwood in the end zone for his second touchdown reception of the night to give LC a 28-6 halftime lead.

The Panthers did a solid job in the first half of moving the football on offense and getting it down inside the LC 10 to create opportunities to score touchdowns. However, the main difference in the first half between the offenses of both teams was that the Trojans were able to score touchdowns, while the Panthers could only muster field goals on their promising drives. 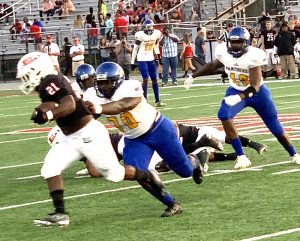 Things went from bad to worse for the Panthers to begin the second half. The ASH offense got the ball to start the third quarter, but the Panthers were unable to move the ball. This forced ASH to punt from deep in their own territory.

Then things took a turn for the worst. ASH punter Lemario Larry missed the ball as he was trying to kick it and the ball was recovered at the ASH four-yard line by the Trojans. A few plays later, McDowell scored his second touchdown from one-yard out to increase LC’s lead to 35-6.

With under nine minutes to go in the third quarter, the Trojans had the ball and were marching on offense once again until the Panthers forced a fumble and it was recovered by Marcus Douglas.

Unfortunately, the Panthers were not able to mount a drive on offense and were forced to punt again. The Trojans responded by moving the ball down the field once again. Toole threw a long pass to Magwood deep into ASH territory. A few plays later, Simmons scored his second rushing touchdown to increase the Trojans’ lead to 42-6.

Once again, the Panthers struggled to move the football on their next possession. On fourth and 12, ASH decided to go for it, but quarterback Kanova Willoughby was sacked and the ball was turned over on downs to LC. The Trojans picked up where they left off as they gave the ball to running back Christian Frazier. Frazier immediately ran the ball all the way down to the Panthers’ seven-yard line. A few plays later, Frazier scored his first rushing touchdown to give the Trojans a 49-6 lead shortly before the end of the third quarter.

Due to the large scoring margin, the clock ran non-stop during the fourth quarter. The Panthers were able to move the football into LC territory. On third and 13 from the LC 44, Willoughby ran the ball 14 yards for a first down to the LC 30-yard line. However, they were not able to score any points on their last drive of the game and the Trojans won by the score of 49-6.

ASH falls to 1-2 on the season, while LC improves to 3-1. The Panthers will regroup to try to get a win next Friday, September 20, when they host the Shaw Raiders in a Region 1-AAAA match up. Kick off is scheduled for 7:30 p.m.