Raiders unable to come back from early deficit against Valwood 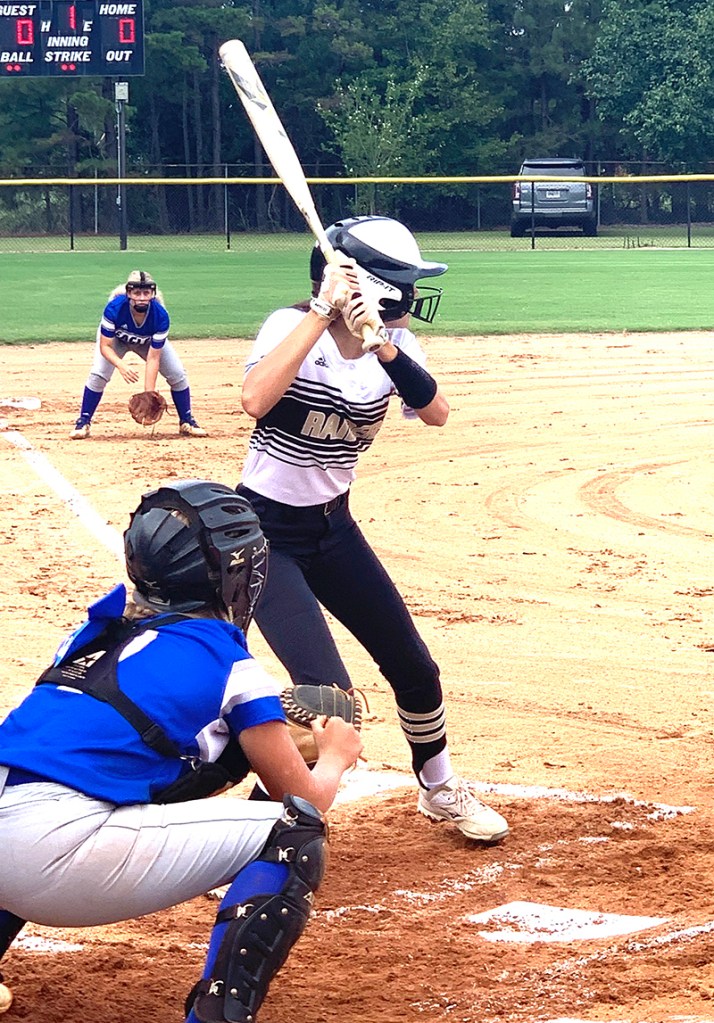 Southland Academy center fielder Morgan Minick seen here batting in a previous game. Minick went 2-for-4 at the plate and scored a run in the loss to Valwood. ATR Archive

AMERICUS – The Southland Academy Raider softball team (SA) fell behind early in the first inning and was unable to make a comeback against Valwood (VS). As a result, the Valiants went on to win by the score of 6-3 on Thursday, September 12, at the Southland Academy softball complex.

The Valiants scored four runs in the top of the first inning off of four hits and an error. The Raiders answered by scoring a run in the bottom half of the inning. With two outs, Sarah Beth Storey reached on an infield single. Then Brookland Weaver reached on an error by VS third baseman Gailey Shaw. Reese Roland then singled to left field. Jadie Burrell, who was put in the game to run for Storey, scored on the play to give the Raiders their first run of the game.

However, the Valiants responded with a run in the top of the second inning. Lindsey Browning led off the inning with a single. After Graceigh Booth flew out to Weaver for the first out, Natalie Rojas belted an RBI double to increase the Valiants’ lead to 5-1.

The Raiders countered in the bottom of the second as Alli Dent drove in Katie Rogers on an RBI single to cut the deficit to 5-2.

However, with two outs and runners at first and second in the top of the fourth inning, the Valiants cashed in on another run when Mary Clare Martin reached on an error by SA second baseman Abby Lightner. Rojas scored on the play to give the Valiants a 6-2 lead.

Neither team scored another run until the bottom of the seventh inning. The Raiders had one last chance for a come-from-behind win. With one out, Morgan Minick singled to left field, but Storey popped out to second base for the second out of the inning. Brookland Weaver drove in Minick on an RBI single and Roland drew a walk to put runners at first and second. However, Holley McCain grounded out to end the comeback bid and the game.

The Raiders committed a total of four errors in this game, which ended up proving costly.

Katie Rogers went 2-for-3 at the plate and scored a run. Both Minick and Weaver went 2-for-4 in the losing cause. SA starting pitcher Rylan Youngdale gave up five runs on nine hits. Only one of those runs was earned. She walked one batter and struck out two.

With the loss, the Raiders drop to 6-7 on the season, while the Valiants improve to 7-2.

The Raiders will try to rebound from the loss when they host Brookwood on Tuesday, September 17, at 4:30 p.m.