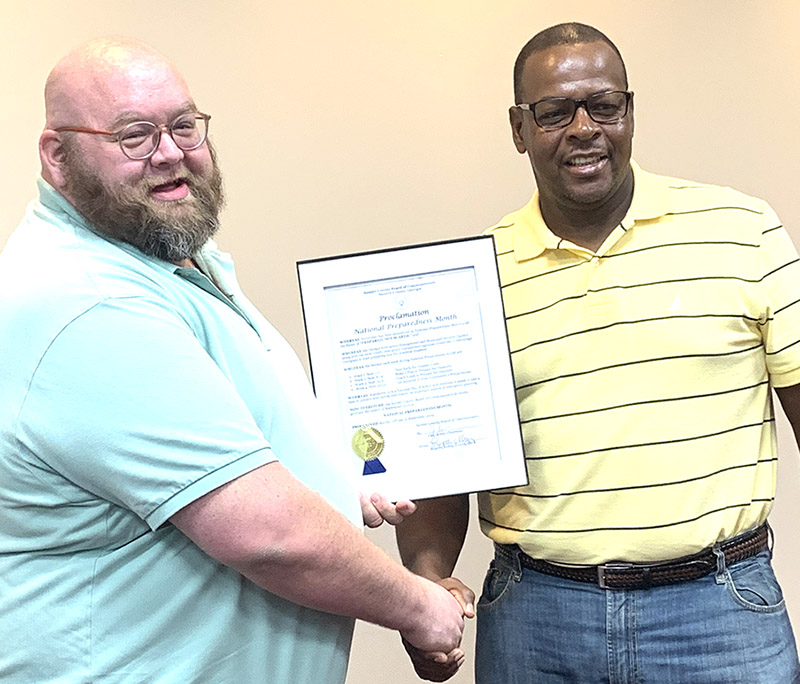 Sumter County BOC Chairman Clay Jones presents Sumter County EMA Director Nigel Poole with a proclamation plaque proclaiming September as National Preparedness Month, a month in which people can learn how to be prepared in case of a natural disaster, such as a hurricane or tornado.

AMERICUS — The Sumter County Board of Commissioners (BOC) issued a proclamation proclaiming the month of September as National Preparedness Month. This was done at the BOC’s monthly work session on Tuesday at the Sumter County Courthouse.

BOC Chairman Clay Jones presented Sumter County EMA Director Nigel Poole with a plaque commemorating the proclamation. The theme of the month is “Prepared, Not Scared.” Poole told the BOC that this is his fifth year of doing National Preparedness month with Sumter County and that he is proud that a proclamation has been made every single year.

A public hearing was held to consider a request for a special exception from Brooks and Beverly Buchanan to exceed one residence per 25 acres for the placement of a manufactured home to accommodate onsite care. The home is to be located at 155 Buchanan Drive in Plains. Sundie Avery, chairman of the Sumter County Planning & Zoning Commission (SCPZC), told the BOC that the SCPZC had already approved the request to place a second home on this property so that Brooks Buchanan can receive the onsite medical care that he needs. Avery went on to tell the BOC that Beverly Buchanan currently has a home there and wants to place a second home on the property. Avery also told the BOC that the SCPZC received a letter from Brooks Buchanan’s doctor stating that it is necessary for him to have additional resources for medical care. Jones asked Beverly Buchanan if she had anything to say. She simply replied that she is appreciative of anything that can be done concerning this matter. Jones asked if anyone else wanted to speak in favor of or against the request for a special exception. Brenda Jennings, the couple’s neighbor and church friend, stated that she is in favor of it because Brooks Buchanan falls a lot and Beverly needs help picking him up. No one else spoke in favor of it or against it.

With that, Jones declared the public hearing closed. County Attorney Kimberly Reid told the BOC that they didn’t have to move forward and approve the request that evening, but could do so if they wished. Jones asked for a motion to approve the request for the special exception. Commissioner George Torbert made the motion which was seconded by Commissioner Scott Roberson. It was unanimously approved.

The BOC had planned to have a public hearing that night to consider requests for a conditional use for the construction of a solar farm by Americus Solar, LLC on several properties located in Cobb, DeSoto, and Leslie. These properties are currently owned by Ceres Farms, LLC. A previous public hearing to discuss the construction of the solar farm was held on Aug. 22, at the Sumter County Courthouse. At that hearing, the residents who live in the areas where this solar farm is to be built expressed mostly opposition to its construction. SCPZC Chairman Sundie Avery requested that the BOC table the issue until the commission makes its recommendation to the BOC. She said that the SCPZC has scheduled another public meeting to discuss the matter for 6 p.m. Sept. 26 at the Sumter County Courthouse in Court Room 8.

Group again comes before board of education on name…