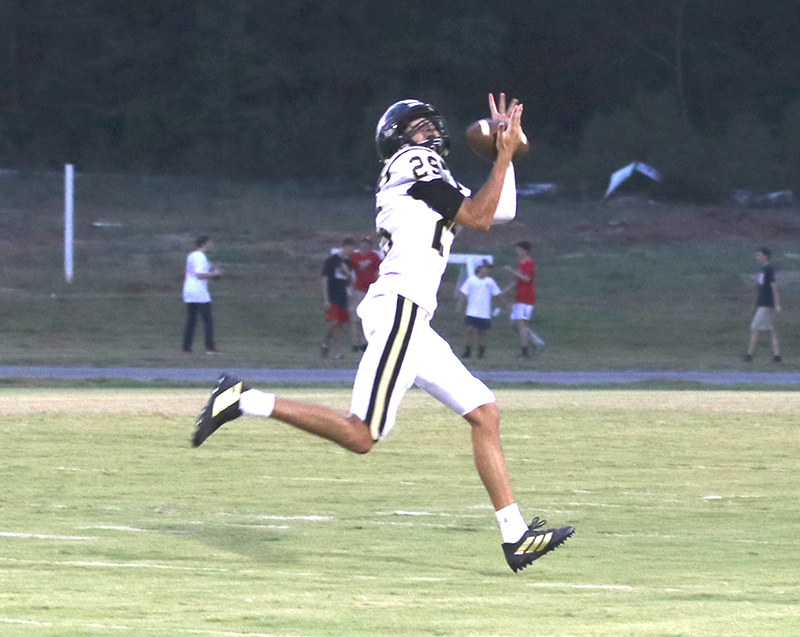 LOGANVILLE, GA – The Southland Academy football team (SA) traveled up to the Atlanta suburb of Loganville, GA on Friday, September 13, and defeated the Lions of Loganville Christian Academy (LCA) 13-0 in a game that was conceded to SA by LCA officials due to severe thunderstorms in the area. 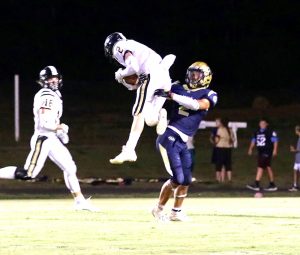 As Walton County was under a severe thunderstorm warning Friday night, the game was delayed until 11 p.m. Facing the prospect of having to meet the Raiders early next week at a neutral site in middle Georgia to complete a non-region game, LCA administrators decided to concede the contest.

The Lions drove rapidly down the field on their opening drive, but faltered after LCA senior running back Keon Mcghee suffered a knee injury and had to leave the game. 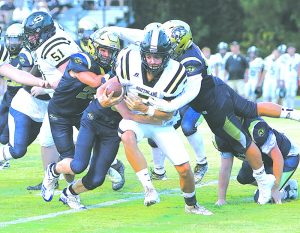 The Raiders stopped the Lions twice on fourth down. One of those stops came after the LCA defense recovered a fumble by the Raiders. The Lions were unable to take advantage of the turnover due to the strong play of the Raider defense.

On offense, the Raiders began to pick the LCA secondary apart with the passing game. In the first quarter, Law threw a 71-yard touchdown pass to senior wide receiver Tyler Joiner for the first score of the game. 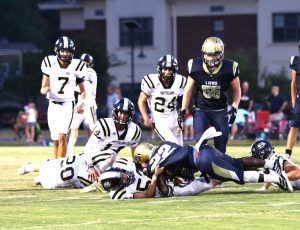 The Raider defense continued to shut down LCA’s offense throughout the game.

After stopping the Lions on another fourth-down conversion attempt, the Raiders had the ball at their own eight-yard line. From there, SA mounted a drive that took nearly seven minutes off the clock and ended it with a five-yard touchdown run by senior running back Clay Owens. The point-after attempt was no good, but that would be all the scoring the Raiders would need. 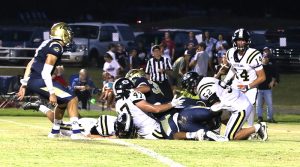 SA senior defensive lineman Jake Kennon (47) is in on a tackle along with Hunter McCain (52).
Photo by Sherri Bass

Both teams endured a lightning delay midway through halftime that held up play for more than an hour before the game was finally called. 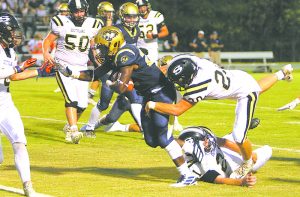 SA sophomore defensive back Landon Griffin (22) tries to bring down the LCA running back.
Photo by Patrick Graham

SA will have next week off to prepare for a road game in Newnan, GA on Friday, September 27, against the Heritage School. Kickoff for that game is scheduled for 7:30 p.m.