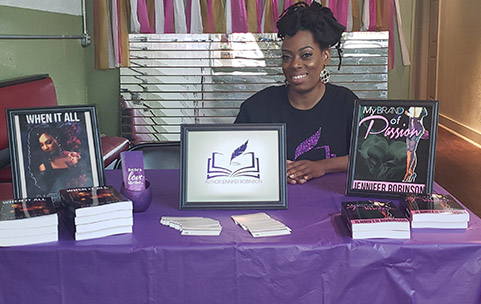 AMERICUS — Jennifer Robinson, a local speech therapist in the Sumter County School system, has found great joy in bringing her long-term dream of becoming a published author to fruition. Robinson says she has always enjoyed writing but only saw it as a hobby. Publishing anything she wrote didn’t seem like much of a possibility.

Yet Robinson took the plunge and began posting poems on social media and was surprised by the response she received. She wrote poems that were personal, expressions of what she felt, she said. “It was an eye-opening experience to know that other women had similar stories of hope, love, fear and hurt,” she said. She was writing out how many women felt, feelings that women sometimes didn’t know how to put in words. She found power in her writing. It was her sister that encouraged her to tell the world needed what she had to say.

“It was an ‘ah-ha’ moment,” Robinson recalled. “I really didn’t know what I was capable of until my sister encouraged me to use my gift.”

In 2013, Robinson released her first book of poetry, “But …there’s love” and “Conversations of the Heart” in 2017. The first book was relatively easy, she said, being that she had over 30 composition notebooks full of journal entries and poems. The second was more difficult because she wrote with the intent to publish. Both books were met with praise from family and friends, as well as strangers. Robinson was content to be a published poet but again, her support system felt she was capable of doing more. They encouraged her to write a book.

Poetry is easy for Robinson, she said, being that she’s written poems since middle school. She wasn’t as confident in writing stories as she was poetry. She used to jot down story ideas and character names but never really tried to write a story, she said.

“I was an avid reader,” Robinson said. “But reading and having book ideas didn’t translate into me writing a book. I just didn’t think I could do it.”

But it was a long-distance relationship that gave her the chance end her doubts.

“I met a guy five years ago,” Robinson said. “He lived in Delaware and I lived in Georgia. We talked on the phone for a few months and made plans to meet. I wrote a story about seeing him for the first time and sent it to him. He was amazed at what I wrote and pushed me to write more.”

The “guy” encouraged Robinson to write more stories and she sent some of her short stories to a friend who was equally impressed. Still, she considered it as just a hobby. She started writing short stories and posting them on her blog, gaining a pretty good following. Her short stories were popular among her family and friends and they kept asking when she was going to write that book. She didn’t think she had what it took to write an entire novel, she said, so she made plans to write a collection of short stories.

But when she started writing, it morphed into more than just a short story. The finished product became a novel of over 70,000 words. Being extremely self-critical, Robinson re-wrote the entire book twice. When she was finally satisfied with it, she tried to convince herself that just writing the book was an accomplishment in itself, and she refused to send it to her editor.

“I met my editor Amanda before I started writing. She helped me so much in the early stages but when I finished my book, I didn’t want her to read it. She literally threatened me into sending her my book,” Robinson said with a laugh.

Despite the compliments she received from writing short stories, she was afraid she wasn’t talented enough to become a novelist. Her editor offered encouragement and pushed her to publish her first novel.

“Holding my first novel in my hands was surreal,” Robinson said. “It was different than my poetry book.” It is titled “My Brand of Passion.”

Earlier this year, she released her second novel “When it all falls down,” which, like her first novel, was met with positive reviews. Although she does not consider herself to be a famous author, Robinson says she sometimes feels like a celebrity.

“I can go to Walmart and someone will stop me and say ‘aren’t you the girl that writes? I love your books.’ That’s such an awesome feeling,” she said.

When asked why she thinks people really enjoy her books, she was confident in answering. “An author I follow on Twitter said she wants her books to be about regular black people living life and finding love,” she said. “That summed up how I write. I want people to read my books and be able to relate to a character or situation.”

Robinson likes to include real-life situations in her books. From domestic violence to parenting to mental health, she hopes to help someone through fiction.

“I realize I was given a gift and with that gift, I plan to help people. Not just by giving them a good book to read, but to find valuable life lessons,” she shared. And writing has also given her some life lessons about herself as well. Robinson has developed confidence in her writing and learned not to doubt herself so much. And she feels she’s shown people that where they live doesn’t have to be a hindrance.

“Americus is a small town but great things can and have come from here,” she said. “Don’t let people convince you that you cannot fulfill a dream because you don’t live in a big city. Don’t limit your passion because of where you live.”

Robinson received a bachelor of science degree in history from Georgia Southwestern State University and a master’s degree in human services from Capella University.

All of Jennifer Robinson’s books can be purchased on Amazon.